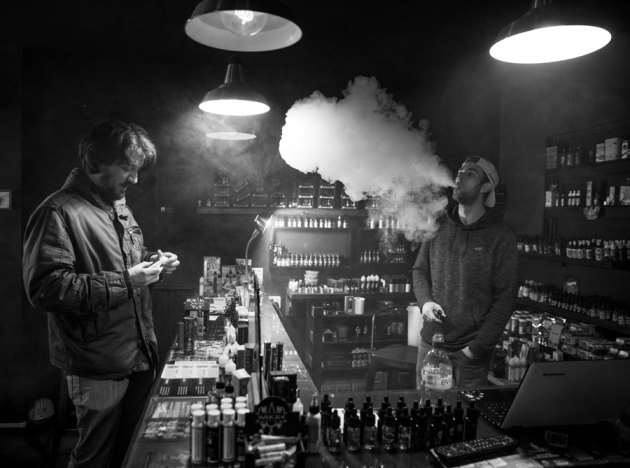 Vaping is often seen as a healthier alternative to conventional tobacco smoking.

In the time it takes you to read this article, at least one cigarette smoker in the United Kingdom will have switched to vaping. As economic uncertainty grips many industries, the use of e-cigarettes is booming. The £6.1-billion (US$7.9-billion) global market for them is now about 20 times what it was in 2010. It is expected to double again in the next three years.

Does vaping encourage adolescents to move on to the real thing? Precisely how much safer is it than smoking? Are there hidden dangers? Much remains for researchers and clinicians to debate. But studies suggest that e-cigarettes are considerably less harmful than cigarettes, and that they may help smokers to substitute a safer habit for a deadly one. In the United Kingdom, for example, public-health advisers have declared e-cigarettes safer than conventional cigarettes, and 850,000 UK vapers now consider themselves ‘ex-smokers’ — a likely win for public health.

Dozens of countries regulate vaping, using new or existing rules. But in the biggest market for e-cigarettes — the United States — the industry has grown up with few government controls. The country accounted for 43% of the world’s consumption of vaping products in 2015. Yet the US Food and Drug Administration (FDA) has been slow to respond. E-cigarettes first hit the US market in force in 2006. It was 2014 before the agency released its first proposals to regulate them, and those rules were not finalized until last August.

Now the FDA’s policy seems to be in jeopardy. Some lawmakers, with nudging from the e-cigarette industry, want to replace it. Last month they pushed — unsuccessfully — to exempt thousands of e-cigarette products from the regulations, by trying to add the provision to a crucial funding bill. President Donald Trump’s young administration shows signs that it might push back against the new rules too.

On 2 May, The Washington Post reported that the FDA had postponed a series of deadlines after which e-cigarette manufacturers will be legally required to list the ingredients in their products, and to label those products with addictiveness warnings.

The reason given was to allow the agency’s new leadership to evaluate the rules. On 9 May, the US Senate confirmed that leadership by announcing the venture capitalist and physician Scott Gottlieb as FDA commissioner. Gottlieb has numerous ties to industry, and has served on the board of an e-cigarette company.

The FDA’s e-cigarette regulations are unlikely to have been popular at that company. And, on the other side of the debate, many public-health researchers dislike them too. Both sides are concerned that the regulations are so onerous that they will squash the industry.

Certainly, the rules place a curious onus on e-cigarette companies to prove that their product benefits the public health; one interpretation suggests that a company would have to do so for each new flavour. The FDA estimated that gaining approval would cost companies more than $450,000 for each product. This would squeeze out smaller firms and place the industry firmly in the hands of the major tobacco companies. And there are widespread fears that the plan could discourage innovation in the sector: why develop a new product, or fix a flaw in an old one, if it will cost your company hundreds of thousands of dollars to have it approved?

So if Congress or the new FDA administration does away with those regulations, there may be few tears shed. But the late-gained momentum must not be squandered. The FDA is under-resourced and struggles to keep up with its growing regulatory mandate. But it should still be able to move rapidly to produce more-feasible regulation on vaping that still protects consumers. One option would be to establish basic safety standards and require manufacturers to list their ingredients, but not to demand proof that each product benefits public health.

E-cigarettes have prompted legitimate concerns. The rapid rise of vaping among adolescents — as well as the marketing of e-cigarette flavours such as ‘gummy bears’ and ‘bubble gum’ seemingly aimed at younger users — has caused particular alarm. Ideally, regulations would maintain safety standards and restrict marketing aimed at children and adolescents, while ensuring that e-cigarettes remain available to wean smokers off cigarettes.

Observers will also be monitoring how the FDA handles Gottlieb’s potential conflicts of interest, the spectre of which threatens to haunt whatever alternatives the agency might develop. How the FDA manages the controversy over e-cigarette regulation could become an early test of how it intends to navigate Gottlieb’s many other potential conflicts in the pharmaceutical industry. At the very least, the agency must be open and transparent about future changes to e-cigarette regulations — and about its reasons for making such changes.