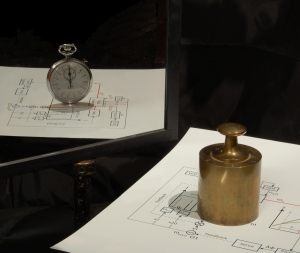 Quantum mechanically, mass can be used to measure time, and vice versa.

Physicists have created an atomic clock that relies on a fundamental link between time and mass. The researchers, at the University of California, Berkeley, say that the pulse of the clock is determined solely by the mass of its beating heart, a caesium atom.

Although their claims are controversial, the researchers say that the device could also have a role in redefining the kilogram, the only basic unit of measurement not yet tied to a fundamental physical phenomenon.

US energy secretary Steven Chu, a physics Nobel laureate and a former adviser to the team's leader, declares the experiment “very significant work that shakes up the mainstream beliefs” in a whole class of atomic experiments.

Current atomic clocks are based on the microwave signals emitted by electrons inside an atom as they move from one energy level to another. The best experimental clocks can keep time to better than 1 part in 1017, or 1 second every 3.1 billion years. Had one of these started running at the Big Bang and continued up to the present, it would have lost (or gained) no more than a few seconds.

But those internal atomic oscillations are determined by the interactions between the atom’s electrons and its nucleus, not to mention other quantum effects, such as spin, the quantum analogue of magnetic moment. The oscillations are well defined, but not as fundamental as some scientists would like them to be.

The researchers, led by physicist Holger Müller, describe the clock in Science this week1. Müller and his colleagues say that their work goes back to the basics of quantum mechanics — to Arthur Compton's demonstration in 1923 that X-ray photons can deliver a detectable momentum impulse to an electron, and to Louis de Broglie's subsequent insight that moving electrons (and atoms) behave like waves.

The quantities involved are almost beyond imagination. The characteristic ‘Compton’ frequency used to describe these matter waves is around 1020 Hz for an electron, and 3 × 1025 Hz for a caesium atom.  Nevertheless, using a combination of atom interferometry and ultra-precision laser techniques, Müller and his team have, in essence, found a way to count those Compton cycles.

In practice, there is no direct way to measure the Compton frequency — which is where atom interferometry comes in. The researchers used a ‘cloud’ of around 1 million caesium atoms divided in two. One half was given a series of 10 ‘kicks’, or tiny laser-photon impacts, which slow the Compton cycles by a precisely known amount.

The quantum interference occurs when the manipulated half of the cloud of atoms is reunited with the unaltered half: the output signal of the interferometer is at a maximum when the two populations differ by an integral number of cycles. The researchers can lock the input ‘kick’ frequency extremely accurately to maintain the maximum atomic output; the locked frequency is then the pulse of the new atomic clock.

Müller makes no great claims for the precision of the clock. With an accuracy of 4 parts per billion, “it’s no better than the original atomic clocks 50 years ago,” he says. But, he adds, “who knows what we could achieve with five decades of improvement.”

But what is more important, Müller says is that the only physical parameter that appears in the expression for the clock frequency is the mass of the caesium atoms. “Every other clock,” he explains, “involves a reference using at least two particles that interact. This Compton clock is the first to be based entirely on a single particle’s mass.”

That means that the device, which in principle can be built with a single atom, Müller says, could serve as the foundation for a new definition of the kilogram tied to a precise laser frequency.

Chu agrees: “This paper opens up the possibility that the standard of mass can be redefined in term of an atomic quantity instead of a lump of metal,” he says, referring to the chunk of platinum-iridium kept at the International Bureau of Weights and Measures near Paris, France, that serves as the prototype kilogram for the International System of Units (SI).

Ian Robinson, a physicist at the UK National Physical Laboratory in London, who is involved in the effort to precisely measure Planck’s constant, finds the new experiment impressive. “What it could do, once the Planck constant is fixed, is drop the new SI straight down to the atomic scale. Once it’s done, it will be brilliant!”

The work is already running into criticism, however. Claude Cohen-Tannoudji, who won the 1997 Nobel prize alongside Steven Chu, for one is not impressed. The paper "reports a measurement of the recoil frequency, but this recoil effect has been known for decades," he wrote in an e-mail to Nature, adding, "Any atomic clock involves masses. But nowhere in their experiment, does a real Compton oscillator at 1025 Hz appear!"

John Close, a quantum physicist at the Australian National University, has taken a close interest in the to and fro of the debate, and suspects it will take some time before it is resolved. “Holger [Müller] is a brilliant physicist,” Close says. “His experiments have forced a lot of people to think very clearly about profound aspects in this arena of atomic physics and relativity.”