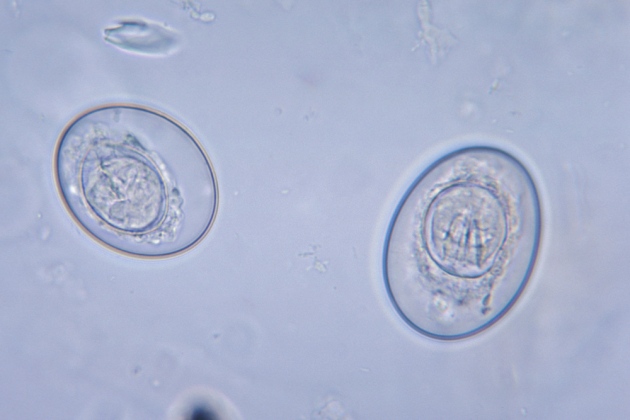 A tapeworm that infected a Colombian man deposited malignant cells inside his body that spread much like an aggressive cancer, researchers have reported in a bizarre, but not unprecedented, case.

“We have a situation where a foreign organism is developing as a tumour rather than developing as an organism,” says Peter Olson, a developmental parasitologist at the Natural History Museum in London. He is part of a team that describes the case in a 4 November report in the New England Journal of Medicine1.

Tapeworms battle it out to control shared host

The apparently cancerous cells were first examined in 2013 by investigators at the US Centers for Disease Control and Prevention (CDC) in Atlanta, Georgia. They came from a 41-year-old Colombian man with HIV, who had been ill for months when he sought medical attention in January 2013. Colombian doctors found that he had a compromised immune system, had been infected by the dwarf tapeworm (Hymenolepis nana), and had small tumour-like growths in his lungs and lymph nodes. They sent tissue samples to the CDC.

Under a microscope, those samples revealed small odd-shaped cells that, like a cancer, appeared to be invading nearby healthy tissue, the CDC team found. Yet the cells tested negative for human proteins. That was a conundrum: although the US investigators knew about the man's tapeworm infection, the invading cells did not look like they should belong to a complex, multicellular organism such as a tapeworm.

Tragically, in May 2013, the patient experienced kidney failure and died. A team led by CDC pathologist Atis Muehlenbachs examined the DNA of the invading cells and determined that they did belong to a tapeworm. And genome sequencing showed that the tapeworm cells carried particular mutations that, in human cells, are associated with tumours.

Tapeworm-derived tumours are extremely rare, says Olson, who has documented a handful of other cases in patients whose immune systems were compromised2, 3.

Olson believes that the tumorous tapeworm cells are rogue larvae that burrowed from the stomach into the lymph nodes of immunocompromised people (a healthy immune system would stop this invasion). The larvae are loaded with regenerative stem cells, so instead of turning into an adult tapeworm, they proliferate. “Those stem cells that would normally give rise to a segmented worm don’t, because they’re in the wrong place and have the wrong environmental cues,” says Olson.

Some of the cases that Olson has worked on involve the dwarf tapeworm, which is unique among the several thousand other known tapeworm species in that it can develop fully in the gut of its mammalian host. Normally, tapeworm eggs are expelled by their host and then mature in an invertebrate, before being transmitted back to a vertebrate host.

Elizabeth Murchison, a molecular geneticist at the University of Cambridge, UK, says that she finds the case astonishing. Although there is no evidence that the proliferative tapeworm cells might be transmitted between humans, Murchison (who studies tumour cells that spread between animals) wonders whether proliferative cells from other parasites could become infectious.

“This paper is tremendously important as it presents the existence of a new type of disease process, which may have previously been overlooked,” she says.