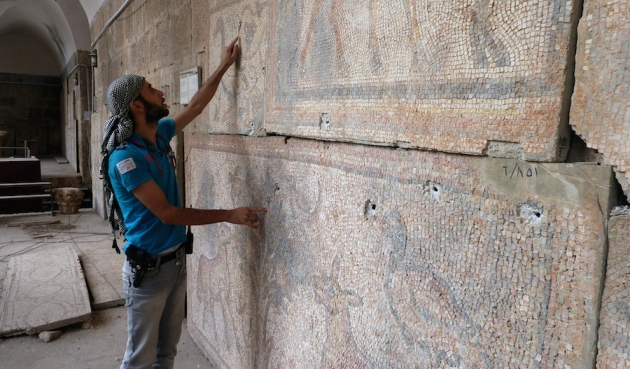 A Syrian rebel fighter views a mosaic at the Ma'arra Mosaic Museum in Syria.

When fighting between Syrian rebels and government forces neared the Ma’arra Mosaic Museum near Aleppo in 2012, archaeologists sprang into action. To save the museum’s Byzantine and Roman tile masterpieces, a team of researchers from Syria and the United States decided to swaddle the artworks in protective sheets of Tyvek fabric and truckloads of sandbags imported from Turkey.

The work paid off. In June, a barrel bomb hit the museum’s courtyard, and although it damaged some mosaics stored outdoors, the roughly 150 square metres of mosaics inside — which date from the third to the sixth centuries — were largely unharmed.

The Ma’arra project was a notable success, but it is just one of roughly 20 efforts under way to protect cultural treasures that are threatened by Syria’s ongoing civil war — and, perhaps, to learn lessons that can be applied to conflicts elsewhere. “Hopefully, when peace does break out, there will be a richer archaeological heritage for people to see and enjoy,” says Robert Bewley, an archaeologist at the University of Oxford, UK.

These preservation efforts have intensified in recent months, as the Islamic State (commonly known as ISIS) has destroyed important Syrian heritage sites such as the ancient city of Dura Europis and the temples of Palmyra. Although little short of a military intervention can prevent such attacks, archaeologists hope to preserve for future generations records of sites at risk.

Researchers are more optimistic, however, about their ability to reduce damage caused by the more commonplace looting and illegal or poorly planned construction. Multiple analyses of satellite images that document archaeological sites over time suggest that more sites are destroyed by looting and construction than by the attacks that have become a regular feature of ISIS propaganda videos. And it is not just sites in Syria and Iraq that are vulnerable: looting of archaeological treasures is widespread in countries such as Yemen, Tunisia, Libya and Egypt.

Mindful of this, Bewley is leading a project to document vulnerable sites in places spanning from Mauritania to Iran by using satellite imagery, aerial photographs and other data. The effort began in January 2015 and has already amassed a database of roughly 94,000 archaeological sites that includes basic information on each site’s location and history.

Bewley and his colleagues hope to publish their database online soon, for public use. But the government of Jordan is already using data from the trove to protect archaeological sites from being damaged by road construction outside of the country's city of Madaba.

Another project, the Million Image Database, is using 3D cameras to chronicle threatened sites and objects in conflict zones in the Middle East and Africa. Run by the Institute for Digital Archaeology — a collaboration between researchers at Oxford, Harvard University in Cambridge, Massachusetts, and the Museum of the Future in Dubai — the team hopes to distribute roughly 5,000 small, lightweight cameras to volunteer photographers in the coming months.

And in Syria, a non-governmental organization called the The Day After is building on the effort to save the Ma’arra Mosaic Museum by raising money to repair the damage from the June barrel-bomb attack. The site's mosaics and other cultural treasures are important symbols to reinforce national identity, says Amr al-Azm, a Syrian archaeologist at Shawnee State University in Portsmouth, Ohio, who is aiding the effort. “Despite the huge divides between the warring factions, this shared common history acts as the glue that holds Syrian society together,” he says.

Meanwhile, the initial push to save the Ma’arra museum has already yielded important lessons for researchers, says Brian Daniels, an archaeologist at the University of Pennsylvania in Philadelphia. Foremost, he says, is the idea that heritage preservation should not be separated from the larger humanitarian response to conflict. Archaeologists on the Ma’arra project asked local residents to decide which artworks were most important to preserve — a simple step that built goodwill and that helped to identify the most culturally significant artefacts, Daniels says.

Others see larger lessons from the conflict in Syria. Bassel Kaghadou, a programme coordinator for a United Nations project on the future of Syria, says that archaeologists and other researchers should push for a greater voice in government to protect irreplaceable cultural sites and artefacts.

“Scientists need to start to learn how to lobby,” he says. “We are simply losing the world heritage. We are losing part of the human memory.”