The skin has long been thought of as a mere physical barrier to attack by pathogens. Now, however, researchers are starting to realize that this simplistic view needs a radical rethink.

The folds, follicles and tiny oil-producing glands on the skin's surface create a multitude of diverse habitats, each with its own community of microbes1. Most of these 'commensals' live harmlessly on the skin, and their presence is thought to stop pathogenic microbes from invading the skin's habitats. But these benign residents are not just innocent bystanders — according to a paper published today in Science, skin-specific bacteria also influence the response from the host's immune system to help fight off infection2. 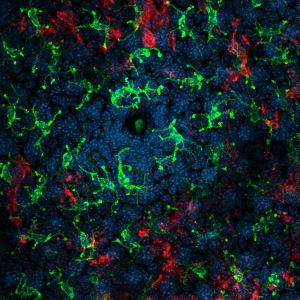 Microorganisms (blue) living around a hair follicle in the skin can alter the responses of immune cells.

Immunologist Yasmine Belkaid and her team at the National Institute of Allergy and Infectious Diseases in Bethesda, Maryland, decided to investigate the immunological role of the skin's resident microorganisms, known collectively as the skin microbiome. “For the first time, we’ve shown that the skin needs microbial signals for proper immune-cell function,” says study author Shruti Naik, a graduate student at the University of Pennsylvania, Philadelphia, who is based in Belkaid's lab.

Most studies of how resident microorganisms regulate the immune system and inflammation have focused on the gut microbiome, largely because it is the site of greatest exposure and contains a wide diversity of microbes. But Belkaid and her colleagues wanted to determine whether the skin microbiome performed a similar function.

“No one had any idea of the relative magnitude of the immunological effect in skin, or how similar any mechanisms found outside the gut would be to those occurring inside the gut,” says Curtis Huttenhower, a computational biologist at the Harvard School of Public Health in Boston, Massachusetts, who is involved in the Human Microbiome Project. “This paper is the first good demonstration I’ve seen that shows the skin microbiome has a parallel immunological response to that seen in the gut.”

To investigate these effects, Belkaid's team compared the production of inflammatory molecules by a subset of immune cells known as T cells from two groups of mice — one that was 'germ-free', having been raised in a sterile environment, and another that had microbes present on the skin. The T cells of germ-free mice produced lower levels of inflammatory molecules than those of the control mice, suggesting that skin bacteria are needed for proper immune cell function.

Next, to confirm that the skin microbiota rather than gut microbes were responsible for this effect, the researchers gave normal mice oral antibiotics that altered only gut microbes and showed that there was no effect on the ability of skin T cells to produce inflammatory signals.

The team then colonized the germ-free mice with a bacterium often found on human skin, Staphylococcus epidermidis. The addition of this one species was enough to reinstate the production of an inflammatory protein by T cells in the skin — but not in the gut. The germ-free mice were also unable to mount an immune response to the pathogen Leishmania major, but the addition of S. epidermidis restored their immune response. “We showed that skin flora drive local immunity,” says Naik.

Finally, to confirm the mechanism underpinning this cross-talk between skin microbes and the immune system, the researchers tested mice that were deficient in a signalling pathway known as MYD88 and found that although it is dispensible in the gut, it is required in the skin.

“This paper takes previous observations that commensal bacteria can have an anti-inflammatory role in the skin one step further and shows how these organisms can affect T-cell maturation,” says Richard Gallo, chief of dermatology at the University of California, San Diego. In essence, commensal bacteria help to fine-tune host immune-cell responses.

“The fact that we found that protective immunity is dependent on skin, rather than gut, microbiota gives their role a specificity that was lacking previously,” says study co-author Julie Segre, a skin-microbiome researcher at the National Human Genome Research Institute in Bethesda. There may be commonalities in how gut and skin microbiota work, but, she adds, there will also be important differences.

Huttenhower says that this work is a timely reminder that the research community needs to look beyond the gut to fully understand immunological responses.

Segre notes that the findings are a first step towards detailing whether the gut, skin or oral microbial communities communicate directly with each other or if the skin microbiome simply primes the immune system. “The gut microbiome has been the focus for the last ten years,” she says. “Now it’s the skin’s turn.”