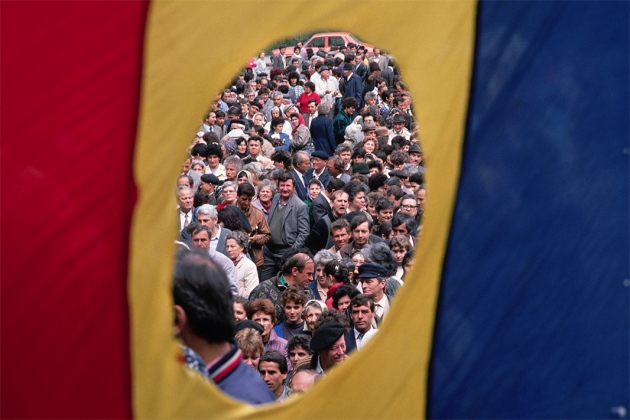 People in Bucharest, Romania, wait to vote in democratic elections in 1990 after the fall of Communism — but voter turnouts in Eastern European countries are now among the continent's lowest.

In a year of pivotal elections across Europe — in the Netherlands, France, the United Kingdom and Germany — voters are being urged to turn up to the ballot box. Yet long-term data suggest that political apathy has risen steadily in Europe’s citizens, says Simon Hix, a political scientist at the London School of Economics.

Voter turnout across Europe is at its lowest point since suffrage rights were extended to the broader population, says Hix — a trend he illustrated this year in a series of charts that show how voting patterns have changed across the continent for the past 100 years. From the Second World War to the early 1980s, around 80–85% of the electorate turned out to vote. But since then, participation in national elections has fallen steadily to just under 65% (see 'The rise of Europe's non-voters').

Falling turnouts have been discussed at length, but Hix says that his plots — which he tweeted in February, but are part of a continuing research project — are the first to chart how voting patterns of Europeans changed over such a long time period. 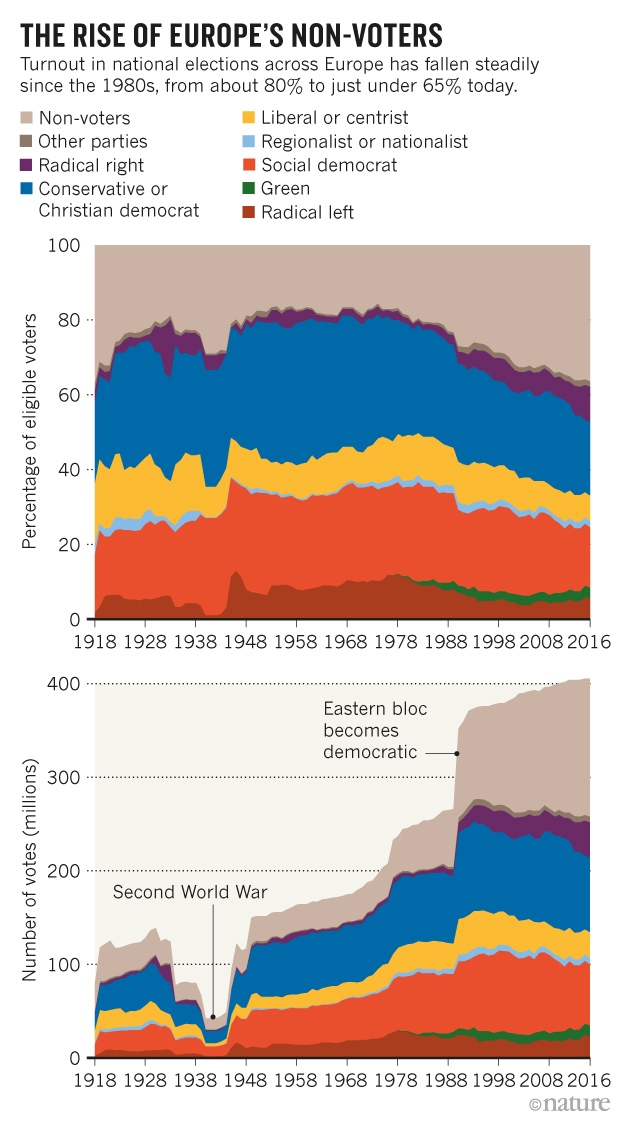 Hix and his colleague Giacomo Benedetto, a politics researcher at Royal Holloway, University of London, collated voting data from national election records from 31 European countries back to 1918, when many more people gained voting rights in Europe after the First World War.

To find out how political leanings had changed, the researchers allocated parties voted for to seven main ‘families’ ranging from ‘radical left’ to ‘radical right’; they also counted how many eligible voters abstained.

To the researchers’ surprise, they found that from around 1990, non-voters made up the single biggest block — in stark contrast to the past. “We expected that non-voters would increase as a proportion of all voters since the early 1990s, as we knew that turnout was low in the new democracies in central and Eastern Europe,” says Hix. What they didn't expect is that when combined with the votes in Western Europe, non-voters would constitute the single largest block by the early 2000s. The rise of political apathy could be considered the strongest political trend of the latter part of the twentieth century, he suggests.

Evidence from election studies — official surveys conducted just after national polls take place — in many advanced democracies since 1945 suggests that voting rates have fallen in young people, but remain high in the generation born in the years after the Second World War.

“Previous generations valued democracy more, they fought wars and women argued to get the vote,” says Hix. Younger generations take all this for granted and have become cynical, he says. He worries that society may be effectively returning itself to a state akin to pre-emancipation, when the vote was reserved for landed gentry.

Non-voting is on the rise across Europe and other advanced democracies, and usually has to do with protest, disillusionment and feelings of distance from democracy and elites, says Daniele Caramani, who studies comparative politics at the University of Zurich in Switzerland.

But the rise is most dramatic in Eastern Europe. That is a paradox because many countries there became democracies only after the fall of Communism in the early 1990s, says Caramani. “Only 20 years ago, these countries were under Communist dictatorships. They fought hard for the right to vote, then as soon as they had democracy they started abstaining,” he says. “It’s like if you come from a famine and all of a sudden you have enough food and you throw it in the garbage.” Caramani suggests that the trend could be down to disillusionment with the old elites who were able to maintain their grip on power even after the fall of Communism.

But an increase in abstention doesn’t necessarily mean people are less interested in politics. “Traditional forms of participation are in decline, but new ways such as on social media are picking up and may be resulting in a replacement effect,” he says.

In the United Kingdom — which holds its next general election on 8 June — the generational voting divide is particularly stark. The 1990s saw a huge decline in youth turnout there and the country “now leads the world with its gap in voter turnout between older generations and young people”, says Abhinay Muthoo, an economist at the University of Warwick, UK. The difference in voting rates between UK people aged over 55 and those under 35 is about 35 percentage points — triple the average for countries in the Organisation for Economic Co-operation and Development, according to preliminary work by Muthoo.

One argument described by Muthoo suggests that the trend goes back to the mid-1980s, when a lot of people who traditionally voted one way or another stopped voting altogether because of disillusionment with the politics of the time, among other reasons. When these people stopped engaging, it’s possible that their children didn’t go out to vote either.

“People who get socialized into voting at an early age keep this habit,” says Caramini. “It might be that people who are socialized now in a time of distrust of political parties may never vote when they get older, it’s a generational effect that is well confirmed by research.”

Hix’s further work also neatly illustrates a trend that has dominated political commentary over the past year: the rise of far-right movements. In Europe, the data show that this has been fuelled largely by voters in Eastern Europe. The proportion of votes for far-right parties in Europe now matches the levels of the early 1930s, he says.

This could prove to be a growing issue, says Caramani. Alongside non-voters, far-right parties are the only faction that shows sustained signs of growth.