Theoretical physicist Paul Steinhardt did not expect to spend last summer travelling across spongy tundra to a remote gold-mining region in north-eastern Russia. But that is where he spent three weeks tracing the origins of the world’s only known natural example of a quasicrystal — an exotic type of structure discovered in 1982 in a synthetic material by Dan Shechtman, a materials scientist at the Israel Institute of Technology in Haifa who netted the 2011 Nobel Prize in Chemistry for the finding.

“I just grabbed the problem and held on wherever it dragged me — even across the tundra,” says Steinhardt, from Princeton University in New Jersey. The story includes secret diaries, smuggling and the discovery that nature’s quasicrystal seems to come from a meteorite some 4.5 billion years old: far from an artificial innovation, the quasicrystal may be one of the oldest minerals in existence, formed at the birth of the Solar System. The finding was published this week in the Proceedings of the National Academy of Sciences1. 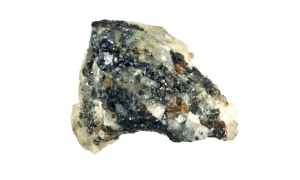 A meteorite found in the Koryak Mountains in Russia contains the only known example of a natural quasicrystal.

When Shechtman first reported the atomic structure of a quasicrystal, it shocked researchers. Instead of a lattice of regularly repeating units like any normal crystal, the atoms were arrayed in a pattern that was ordered but never quite repeated itself, like an intricate three-dimensional mosaic. Around the time of the publication, Steinhardt, then at the University of Pennsylvania in Philadelphia, happened to be working with mathematician Dov Levine on the theory behind such non-repeating patterns. He later coined the term quasicrystal.

Hundreds of synthetic quasicrystals have now been created in controlled conditions in laboratories, by melting and cooling metals. Steinhardt started a search to find a quasicrystal in nature, trawling through databases of x-ray diffraction patterns recorded from other materials in order to find possible candidates. But it was not until the autumn of 2008 that he was contacted by Luca Bindi, a mineralogist at the Museum of Natural History in Florence, Italy, who had found a quasicrystal grain, around 100 micrometres across, in a millimetre-sized rock fragment in the museum’s collection. In 2009, Steinhardt, Bindi and their colleagues reported in Science2 that the grain was a quasicrystalline alloy of aluminium, copper and iron. According to the label on the box in which it was stored, the rock came from the Koryak Mountains in Russia.

In the latest study, Bindi joined with Steinhardt and other US scientists to analyse the rock. The ratios of isotopes of oxygen in silicate and oxide minerals around the quasicrystal grain are typical of minerals found in meteorites called carbonaceous chondrites, the team reports1. This indicates that the rock is of extraterrestrial origin and very old: virtually all chondrites formed at the birth of the Solar System. It is likely, but not certain, that the quasicrystal grain within the meteorite is of roughly the same age. It was found entwined with a silica mineral that forms only at high pressures and temperatures — such as might be created by a collision with the chondrite body.

The huge array of minerals that we know on Earth today did not start to form until plate tectonics and the oxygenation of the atmosphere created new kinds of physical and chemical environments (see ‘Microbes drove Earth’s mineral evolution'). Only around a hundred minerals have the distinction of forming before that, when matter started colliding and coalescing to form the Solar System. So if the natural quasicrystal did form under astrophysical conditions — by mechanisms that the researchers still don’t understand — then it can be added to the select category of earliest minerals.

The meteorite’s history on Earth is also exotic. As Steinhardt tells the story, the Florence museum had bought it in 1990 from a now-deceased private collector in Amsterdam, as part of a job lot of 10,000 samples. Bindi tracked down the collector’s widow, who agreed to let the scientists look at secret diaries that included details of an ‘exchange’ — or smuggling operation — in Romania. After further detective work, including talking to a former Russian secret-service agent who had helped to smuggle the rock out of the country, the scientists found V. V. Kryachko, the man who in 1979 had first dug the rock from sticky clay in the remote Chukotka region of Russia, just across the Bering Strait from Alaska. Steinhardt and his colleagues trekked out to Chukotka last summer to examine the site for signs of quasicrystals, but have not yet published their findings.

So far, says Steinhardt, hunting down natural quasicrystals has been incredibly rewarding. “I have learned so many things about materials science, the Earth, even the history of Russia. It’s an irresistible problem which has delivered fun and fascinating science and non-science.” He hopes geologists and mineralogists will keep hunting for unusual diffraction patterns— perhaps even in non-metals. “I’m not through searching for other natural quasicrystals,” he says.