Alberta’s Can$60 million (US$57 million) carbon-cutting programme is failing, according to the latest report from the Canadian province’s auditor-general, Merwan Saher. Like many such programmes around the world, it includes an emissions trading scheme, which allows polluters to meet their emissions reductions targets by buying carbon offsets from a selection of approved projects. The offsets are supposed to be real, measurable and provable. But the report claims that the province, despite earlier warnings, has not improved its regulatory structure — and calls the emissions estimates and the offsets themselves into question.

Nature looks at the hurdles faced by Alberta and other jurisdictions over their emissions trading schemes. 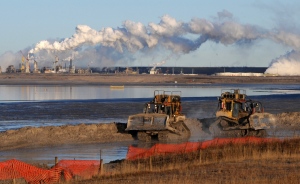 Alberta's oil-sands companies are required to reduce the intensity of their greenhouse-gas emissions under the province's emissions trading scheme.

What carbon trading schemes exist around the world?

In addition to Alberta's scheme and the expiring Kyoto Protocol’s Clean Development Mechanism (CDM) run by the United Nations, emissions trading schemes are operated in the European Union (EU), New Zealand, the city of Tokyo and by a group of northeastern US states. Several other countries and regions, including California, India and Australia, are also planning to start their own schemes.

The EU emissions trading scheme includes 11,000 power stations and industrial plants that produce half of Europe’s total carbon emissions — but it is struggling in the economic downturn (see 'European carbon market plummets').

Alberta’s scheme, called the Specified Gas Emitters Regulation, was passed by the Alberta legislature in 2007. It sets limits on the intensity levels of greenhouse gases emitted by Alberta facilities — oil sands operations and coal-fired power plants, for example — if they emit more than the equivalent of 100,000 tonnes of carbon dioxide a year. These facilities must reduce their greenhouse-gas emissions intensity — emissions per unit of production — by 12% each year, but they are not required to reduce their overall emissions.

How are emissions measured?

Not all greenhouse-gas emissions are measured in the same way — or with the same level of accuracy. In industrial settings, continuous emissions-monitoring systems can directly monitor flue gases for CO2 and other greenhouse gases. Less-accurate emissions estimates are calculated based on surrogate measurements, such as the number of kilowatt hours of energy produced or miles driven. Alberta, unlike other jurisdictions, has opted to link reduction targets to a facility’s production output.

Who checks the emission estimates?

In Alberta, the Department of Environment and Water requires facilities to have their emission estimates (and offset projects) independently verified. The department also uses another set of verifiers to confirm reports for a sample of those facilities that are signed up to the scheme. The UN’s CDM keeps track of all eligible projects in an online registry.

What can you get credits for?

Alberta facilities can receive carbon credits by investing in a variety of Alberta-based projects. These range from paying farmers to adopt low-till or no-till agricultural practices — thereby turning fields into carbon sinks — to the collection and combustion of landfill gas.

Examples from the CDM include siphoning off the methane produced by pig farms and feeding it to a power plant that would otherwise have used fossil fuels; investing in the development and operation of an energy-efficient rapid transit system in Delhi, India; and dissemination of efficient wood stoves in Nigeria to reduce wood demand and deforestation.

Some emissions trading schemes give preference to local projects. For example, Tokyo's greenhouse gas emitters can purchase credits from outside Tokyo, but are limited in how many they can apply against their emissions.

What are the problems with the credit methods?

Lax verification for carbon-offset projects has been a problem for several schemes. For the credit-creating projects to be effective at reducing overall greenhouse-gas emissions, the scheme operators are supposed to approve only projects that would otherwise not have gone ahead. The auditor-general criticized the Alberta Department of Environment and Water for allowing carbon credits for emissions-reducing activities that have become common practice.

The Alberta report found a lack of standards for how agricultural credits were verified — not one of the credits the auditors checked could be confirmed. It also pointed out that there was no standardized, accurate method for measuring the emissions from oil-sands tailing ponds, which store contaminated water, clay, sand and bitumen from oil-sands processing.

Many opponents of emissions trading programmes also argue that companies are likely to purchase carbon offsets instead of reducing emissions by adopting new technologies or changing their operating practices.

Discussions about how to improve emissions trading schemes have often focused on better measurement, reporting and verification. Better satellite technology, for example, could provide more accurate CO2 emissions measurements. In the case of Alberta, the auditor-general told the Department of Environment and Water that it had to offer better guidance to improve consistency in emissions estimates and project approvals, and provide proof that the measurements were being carried out appropriately.