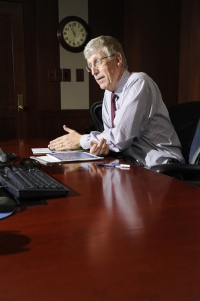 When physician and geneticist Francis Collins took the helm of the US National Institutes of Health (NIH) in August 2009, the agency was flush with a one-time, US$8.2-billion injection of research funds from the American Recovery and Reinvestment Act. Since then, Collins, who headed the Human Genome Project, has had to fit his considerable ambitions to a stagnating NIH budget. He spoke to Nature about his time guiding the $31-billion agency.

What do you see as the biggest accomplishment of your time as NIH leader?

Encouraging creative approaches to the support of great science in a tough economy. That meant looking for ways to leverage partnerships across sectors; ways to encourage young investigators who are perhaps among the most vulnerable; seeking ways to realign NIH programmes that could achieve synergies and energy in areas of particular prominence.

For example, the NIH has implemented President Barack Obama's 2009 executive order on removing barriers to research involving human stem cells by supporting a whole host of new programmes and creating a new Center for Regenerative Medicine here on the intramural campus in Bethesda, Maryland, to focus on induced pluripotent stem cells. That encouraged this remarkable area of opportunity to move more quickly than it would have by default.

The NIH's Common Fund provides particular opportunities to jump start new, creative high-risk endeavours that would not have fit clearly into the agenda of a single institute, such as the Common Fund initiative in single-cell biology.

I have also spent a lot of time with heads of research and development in big pharma, identifying areas of mutual opportunity in the pre-competitive space. One that is vigorously under study is the target-validation issue: how do we take all these new discoveries about genes and proteins and identify the ones that would be most appropriate for mounting a therapeutic development campaign?

“A great many scientists are having trouble getting their ideas supported and getting increasingly frustrated.”

I am impatient. I want to see the NIH do everything possible to advance the cause of human health. And although there are times when we can steer the ship in the direction of scientific opportunity, we also need to be sure that the investigators out there who have great ideas feel encouraged to send them to us and that they’re going to get a fair review.

But in this time of financial stress, more and more potential NIH grantees are in fact feeling discouraged about applying for agency grants.

We are living in a paradoxical time. Biomedical research is rocketing forward at a pace never previously achieved. So to be involved in biomedical research in 2012 is exhilarating. And yet people are faced with probably the most significant stress on the community in quite a few decades, certainly as measured by success rates for NIH grant applications, now down to 17%, and lower than that for some institutes. A great many scientists, including those just starting out, are having trouble getting their ideas supported and getting increasingly frustrated. That is what wakes me up at night.

We at the NIH have some levers we can pull to try to encourage those investigators to keep going. But we don’t have magic. So unless and until we see some turnaround in what has been about a 20% loss in buying power over the past ten years, it is going to continue to be frustrating for the community.

What would you advise a bright 20-something who has an interest in biomedical science? Can you in good faith encourage them to embark on a career that might lean heavily on NIH funding?

I speak to young people all the time who are asking that question. I am a realist about the current crunch but I’m also an optimist. I do believe that the opportunity to take part in biomedical research in the coming years is going to be one that will be incredibly rewarding.

At the NIH, we’re in the middle of analysing whether we have the right quality and quantity of training programmes, so people are well prepared for a satisfying and rewarding career. They don’t all have to become tenure-track scientists and clones of their mentors. We need to stop talking about alternative careers as if they are somehow second rate.

Why did you choose to push to develop the new National Center for Advancing Translational Sciences among many worthy, competing priorities?

Scientifically, it seemed as if the time had come to try to build on a deluge of basic science discoveries about the molecular basis of disease and speed up the process of bringing those forward to clinical benefit. That is what I think the public hopes for from the NIH. I am not so naive as to think that the new centre, with its rather modest budget, is going to swoop in and change everything overnight. But after a lot of public discussion, the conclusion was reached that this really would fill a need that otherwise would not be met.

Did you create more problems than you solved by encouraging investigators to apply for the $8 billion in short-term stimulus money, provoking record numbers of applications for grants that now cannot be renewed?

Of course we are at a particularly challenging time because a lot of great research got started as a result of those extra funds from the Recovery Act. But I don’t regret for one second that those funds were available. They came at the end of a long dry period of flat NIH funding, and there was a pent-up need to support creative science for those two years.