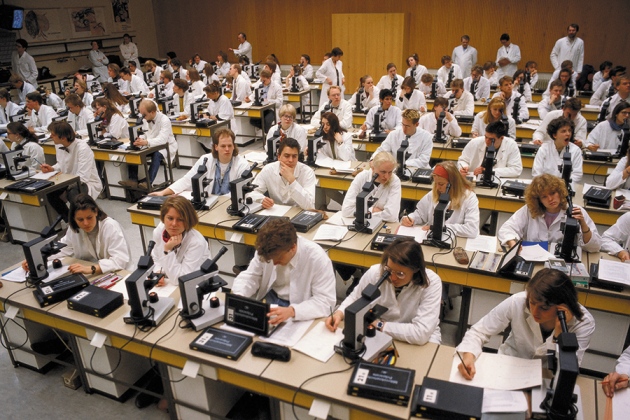 The availability of faculty jobs has not kept pace with the number of biomedical scientists who have entered the job market since 2004.

All too often, funding agencies and recipients fail to appreciate that grants do not just pay for research, they shape careers. To improve support for the research workforce, the characteristics of the labour pool must be understood. But too few data are collected, and the information that is available is not being used fully.

To provide a more comprehensive picture of the biomedical workforce in the United States, we pooled and analysed public data from the US Census Bureau. We focus on respondents to census and household surveys who have PhDs and are categorized as biological or medical scientists.

Most strikingly we define a new, large cohort that we call the doubling boomers. These postdocs and PhD students entered the labour pool when the research budget of the National Institutes of Health (NIH) doubled from 1998 to 2004. Here we present data showing that the numbers of minority and foreign-born researchers in the US biomedical workforce have reached a new high, as has the fraction of workers employed by industry (for more details, see ref. 1).

These analyses offer the most detailed view of the workforce yet and show that the current workforce is fundamentally different to those of past generations.

Our data amplify long-standing recommendations from federally supported study panels. Mentors and trainees need to educate themselves about the options available to young scientists. Research institutions should help trainees to gain skills that are valuable to industry. Pushing them towards academia by default is not helpful or realistic2.

We hope that these insights can spur more relevant training. More importantly, we hope that this analysis inspires more biomedical and social scientists to work together to ask questions and collect data to better inform workforce policies.

The data source that is most often used to analyse US PhD scientists is the Survey of Doctorate Recipients (SDR), funded by the NIH and the US National Science Foundation (NSF) and conducted every other year. Although invaluable, it lacks information about scientists working in the United States who received their PhDs abroad, and about detailed family structures.

Another source of data is the American Community Survey (ACS) run by the US Census Bureau, which includes individuals who were trained abroad and came to the United States for postdoctoral or similar positions. The ACS data are harmonized and integrated through the Minnesota Population Center's IPUMS-USA Project at the University of Minnesota in Minneapolis (http://usa.ipums.org).

These data are freely available and support a broader range of questions than many appreciate. In particular, they offer multi-year samples that allow the study of small populations, such as PhD scientists under 40.

Our analysis of IPUMS-USA data reveals a cohort that entered the laboratory workforce as NIH funding grew from US$13.7 billion in 1998 to $28.1 billion in 2004. These 'doubling boomers' arguably suffered most as funds subsequently decreased (when adjusted for inflation). In 2004, there were nearly 26,000 individuals under 40 with PhDs working as biomedical scientists. By 2011, there were nearly 36,000. Over this period, the number of faculty jobs did not increase. Indeed, the number of openings expected as a result of academics retiring has declined since 1995, when federal law made it illegal for universities to mandate retirement at age 65 (ref. 3).

The work environment that this cohort faces is unlike anything seen before, despite previous booms and busts4. Today in the United States, four out of five PhD biomedical researchers work outside academia — a record high (see 'Lab labour'). They earn, on average, almost $30,000 more a year than their academic counterparts, and feel less pressure to produce scientific publications.

Our data also show that the biomedical workforce is diverse. Almost half under age 40 are from a US minority (individuals who are not white and are non-Hispanic). Some immigrant or second-generation groups are well represented in science; others are not. Among researchers from Asian ethnic groups, around half are of Chinese background and another one-quarter are Indian. The majority of Latino scientists have heritage from Mexico or South America. The representation of various racial and ethnic groups differs from that of the general US population. For example, Korean and Puerto Rican individuals enter biomedical science at proportionally lower rates. Understanding such dynamics is crucial to focus recruitment and retention energies.

Many scientists under 40 had been in the country for less than a year at the time of being surveyed. The doubling of NIH funding created a demand for workers that could not be filled by increases in PhD students and local postdocs, so the number of foreign-born postdocs moving from abroad increased dramatically. Although estimates over time are hard to calculate, our analysis suggests that around 2,800 biomedical scientists with PhDs have moved from abroad to work in the United States every year since 2000.

Career trajectories have not adjusted to accommodate the modern workforce, as others have noted5. Major family responsibilities coincide with crucial periods in independent careers. Around 70% of PhD scientists aged 30–39 are married; of those, 60% have children under the age of 6. If they stay in academia, these scientists are competing for their first major grant awards. Any slowdown in advancement, pay or productivity can have lasting effects on their careers.

Among married female biomedical scientists aged 30–39, 95% had a spouse in the workforce, compared to around 60% of married male scientists. That means that female scientists are less likely than their male counterparts to have a spouse who does not work and may shoulder household responsibilities.

In too many workplaces, parental leave or a reduced schedule can narrow career opportunities6. Although this cohort of young scientists is diverse, policymakers must pay attention to the distribution in (and attrition at) each career stage of academia, because women and minorities are under-represented in leadership and independent-research positions7.

Most of our knowledge about the workforce is about scientists in academia. Our analysis shows that data from IPUMS-USA and other related products can expand our knowledge and inform leaders about biomedical researchers' working conditions. These would allow consistent key indicators related to the biomedical workforce to be updated annually instead of every other year.

Better data could lead to better recommendations for policies and individual decisions. For instance, given our data, those who employ and fund scientists should provide support for families with young children, including childcare subsidies and family health benefits.

Despite decades-long discussion of workforce issues1, 8, 9, data are still not being collected or used effectively. There are multiple data sources about the US postdoc workforce, but the numbers reported range from 27,000 (according to the SDR) to 79,000 (according to the US National Postdoctoral Association). None tracks postdocs outside academic institutions, nor do institutions track the onward paths of their own postdocs. Most do not even know for certain how many postdocs are currently employed in academia (see go.nature.com/2hjsvxp), let alone where they take their next jobs. There is an urgent need to gather and communicate data about what careers past trainees have followed so that current trainees can benefit from this experience10.

Federal agencies are making an effort. Last month, a promising data product was released. Named IPUMS Higher Ed, it takes existing NSF surveys (the SDR and SESTAT), and integrates them into a user-friendly format harmonized over time (http://highered.ipums.org). This product and IPUMS-USA have been developed by the Minnesota Population Center with federal funding and made publicly available online.

The NSF, with the assistance of other agencies, continues to improve its efforts to collect data from PhD scientists and is continually developing new mechanisms for this, such as the Early Career Doctorates Project. In 2016, the NIH commissioned the National Academies of Science to develop a report for Congress on the next generation of scientists. Called the Next Generation Researchers Initiative, the report is expected to be published in 2018.

To advance best practices in workforce development, we must create a transparent system of sharing data. Social scientists have been asking the NIH, the NSF and other federal agencies for access to administrative records around funding awards to assess, for example, how career outcomes differ for individuals covered by their own training grants or by their supervisors' R01 grant. Staff at the NIH and the Census Bureau are working on ways to transfer data into the secured enclaves of the Federal Statistical Research Data Centers.

Federal agencies such as the Office of Budget and Management and the Federal Commission on Evidence-Based Policymaking are focused on applying data to improve policies and programmes. Scientists should advocate for a similar approach to training and workforce development.