In 2008, the world’s media was captivated by a study apparently showing that cows like to align themselves with magnetic fields. But attempts to replicate this finding have left two groups of researchers at loggerheads, highlighting the problems faced by scientists working to replicate unusual findings based on new methods of data analysis.

Magneto-reception has been detected in animals from turtles to birds. Three years ago, Hynek Burda, a zoologist at the University of Duisburg-Essen, Germany, and his colleagues added cattle to the magnetic family with a paper in Proceedings of the National Academy of Sciences. The team used data from Google Earth to show that domestic cattle seem to prefer to align their bodies along Earth’s magnetic field lines1, and showed a similar phenomenon in field observations of deer. 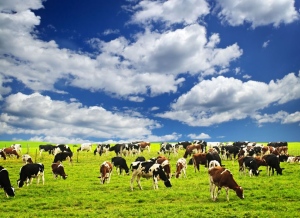 Cattle seem to align with magnetic field lines, but researchers are in disagreement over the finding.

A follow-up study by Burda and his colleagues showed no such alignment near electric power lines, which might be expected to disrupt magneto-sensing in cattle2.

Earlier this year, a group of Czech researchers reported their failed attempt to replicate the finding using different Google Earth images3. The Czech team wrote in the Journal of Comparative Physiology A: “Two independent groups participated in our study and came to the same conclusion that in contradiction to the recent findings of other researchers, no alignment of the animals and of their herds along geomagnetic field lines could be found.”

“When in 2008 the authors started to announce their surprising findings in [the] mass media, we got the impression that this is not the way science should be made and we took a closer look. We found out that it is not as fantastic as it was presented,” says Lukas Jelinek, a researcher in the electromagnetic-field department at the Czech Technical University in Prague and one of the authors of the replication attempt.

In response, Burda and his colleagues reanalysed the replication attempt by Jelinek and his colleagues4. Burda says that half of the Jelinek team's data should be excluded because some of the pastures are on slopes or near high-voltage power lines, for example, or because the images are too poor to make out cattle, or appear to contain hay bales or sheep instead. “One half of their data is just noise,” says Burda.

In addition, Burda's group looked at herds as a whole, whereas Jelinek’s team analysed individual cows. “Of the data that were useable, they looked only at 50% of the cows. It’s very subjective,” Burda adds. His team's reanalysis of  the Jelinek data actually does support the theory that cattle can magneto-sense, says Burda.

In a response to the reanalysis, Jelinek and colleagues say that in some cases they suspect each team may have inadvertently looked at different pictures, owing to mistakes in coordinates5. The Jelinek team says that it only looked at cows far from power lines, and that the slopes are few and could not cause a statistical bias. They write: “Sheep, horses, hay bales, rocks, cows with unsatisfactory resolution, cows near a track, settlement or feeder, were not taken [in the analysis].”

Sönke Johnsen, who studies magneto-reception at Duke University in Durham, North Carolina, says that at least some of the images in question should probably not have been analysed. He also suggests that the proper unit of evaluation is probably the herd, as the alignment of individual cows in herds is unlikely to be independent. Overall, he says that the original results, “while mysterious, still stand”.

Jelinek says that his team does not intend to pursue any more research on this topic. Meanwhile, Burda’s team is already looking at magneto-reception in other animals.