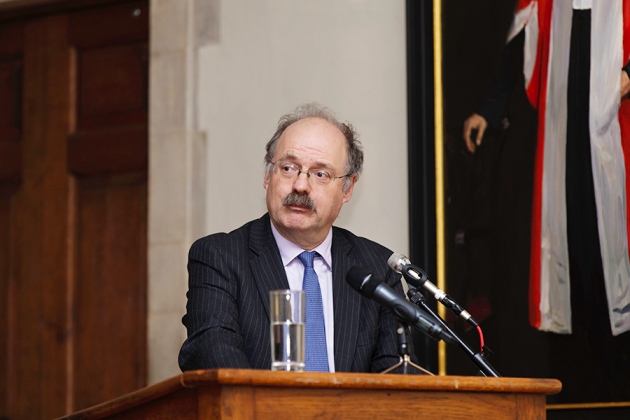 Mark Walport is preparing to take on the most powerful job in UK science. From 2018, he will be the first head of a new central funding organization called UK Research and Innovation (UKRI), which will oversee more than £6 billion (US$7.4 billion) of research funding per year.

The UKRI will unite the activities of nine existing research-funding agencies, including the UK’s seven research councils. But the move has been criticized since it was first recommended in a 2015 report by Paul Nurse, head of the Francis Crick Institute in London. Some British scientists worry about the potential disruption involved in creating one overarching funder, and concerns about the autonomy of the bodies that the UKRI will oversee.

The 2 February decision to appoint Walport — currently the UK government’s chief scientific adviser — drew immediate scrutiny. Martin Rees, an astronomer at the University of Cambridge, UK, and former head of the Royal Society in London, said that, as science adviser, Walport has been a strong proponent of a “more monolithic structure” for UK science funding. “One hopes that he will be mindful of the concerns about how this unwieldy conglomerate will operate, and the widespread view that the individual research councils should not be downgraded,” he said in a statement issued by London's Science Media Centre.

Nature talked to Walport about his plans for UKRI and some of the concerns about his appointment. This interview has been edited for length and clarity.

What will be top of your agenda when you take over the UKRI in 2018?

It’s really about making the whole greater than the sum of the parts. And it’s about building on strength. We don’t in any sense have a system that’s broken — it operates extremely well. But the system at the moment doesn’t provide a single voice for science, research and innovation.

How do you respond to Rees's concerns regarding the unwieldy nature of such a "monolithic structure"?

Do you predict any diminished authority for the research councils in this new structure?

They have always been accountable to ministers and to Parliament. And actually, I think, at one level, they are now being accountable to the UKRI board and the institute executive, and through that, to BEIS [the UK Department for Business, Energy and Industrial Strategy] and its ministers. So if anything, they’re one more arm’s length from ministers than they were before.

The biggest issue facing UK science right now seems to be Brexit. Will you push the government for special consideration for research and scientists in the Brexit negotiations?

I don’t think the government needs persuading that science and research broadly is extremely important, and one of the things that needs to be taken care of during our exit from the European Union. But let’s also make the point that research is a global endeavour. If you look at UK science, we collaborate with people across the whole world, and it’s extremely important we continue to do so in the future.

In some ways, the argument for the UKRI has been strengthened by our need for a much more collective and stronger voice as a result of Brexit.

We asked UK researchers for other questions they wanted to put to you. First, under the UKRI and your leadership, is the new Industrial Strategy Challenge Fund and one-off major investments (such as the Crick Institute) the shape of things to come? Is this a decisive shift in the style of UK science policy towards top-down steering and priority-setting?

Absolutely not. And let’s be clear: there is a rather artificial distinction between top down and bottom up, which is that no one comes along and says, “Let’s have a big initiative in X or Y.” It’s actually that there is a push from the community to have an activity in X or Y. Rather than looking at it as top down and bottom up, it’s more about actually working out what the scale of the support is that is needed to tackle particular problems. Form should follow function.

Second, is there a potential here to see an increasing dominance of medicine, to the detriment of other fields?

There is no danger of that. If you look at my track record as government chief scientific advisor, I’ve always recognized that all of the sciences are important to all of research, and we need a balance. Medicine itself depends on physics, engineering, chemistry, social science, history. It depends on all of these things. Everything is interdependent. And that’s part of the argument for the UKRI. It’s to recognize that the artificial silos that divide subjects are nothing more than artificial silos.

Third, what would you say to critics who see your appointment as a bit of a stitch-up? In this scenario, there were criticisms of the research councils at a time when you are chief scientific adviser, Paul Nurse's review was commissioned and now you have emerged as the chief executive of the new system?

I think people are looking for conspiracy where there is none. It’s as simple as that. Paul Nurse is his own man; he did his own review. It’s not as though he’s saying things that haven’t been said for 20 or 30 years. It’s been an enormous privilege to be the government chief scientific adviser. This is an important challenge — I applied and was appointed.