We have all had those moments of social embarrassment: you’ve just said or done the dumbest thing, everyone is looking at you, and you wish you could just — well, vanish. But would it help if you really could?

Apparently, it would. Using a virtual-reality headset and a calculated confusion of the senses, neuroscientists at the Karolinska Institute in Stockholm have been able to give people the illusion that their body is invisible. Volunteers feel someone stroking their body with a brush, but when they look down, all they see is the brush moving through thin air. This is enough, they testify, to give them the sensation that their entire body cannot be seen. It feels, many of them say, not only invisible, but also hollow — a weird dematerialization of their physical person. The study is published in Scientific Reports1. 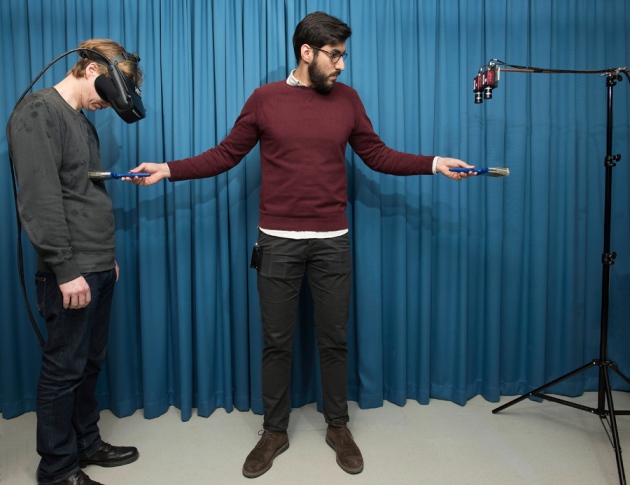 Zakaryah Abdulkarim (middle) creates the invisible body illusion on a participant in the study.

What are the effects of this? The volunteers say — and this was supported by measurements of their heart rate — that the sensation of invisibility reduced their anxiety in social settings (in the study, they saw an audience of “serious-looking strangers” watching them).

Henrik Ehrsson, one of the Stockholm team, thinks that the technique could be used to treat social anxiety disorder, in which people are acutely susceptible to stress in situations such as having to deliver a presentation. They sweat, shake, blush and feel their heart thumping away.

Aside from the use of medication, anxiety is generally treated with cognitive behavioural therapy (CBT), which attempts to condition the subjects by degrees to stay calm in a socially stressful setting. Virtual reality has already shown its value for CBT. But what if, says the Stockholm team, you could give a patient an invisible body and then gradually make them more visible in stages? That’s possible because the illusion created is a matter of degree: in the study, people said that they experienced varying depths of visibility, depending on the conditions.

The research also bears on studies of our sense of ‘body ownership’. In 1998, researchers showed that when people see a rubber hand being brushed at the same time as their own (out of sight) hand experiences that sensation, they feel that the rubber hand is part of their body2. Ehrsson’s lab, which regularly uses illusions to probe, stretch and displace people’s sense of self, showed in 2013 that this illusion can be invoked even for an ‘invisible hand’, and subjects see the sensation that they feel being applied to empty space3. The new study, which extends this work, may cast light on the ‘phantom body’ illusion experienced by some people with paralysis due to spinal-cord injuries, in which they feel they have a body that is out of alignment with their real one.

These potential clinical applications sound promising, but the research touches on something far deeper too. Notions of personal invisibility feature in many of our legends and stories — where it has other, moral connotations. Plato’s Republic tells of the myth of a magic invisibility ring, which a Lydian shepherd called Gyges uses to seduce the queen and murder the king. H. G. Wells’s novel The Invisible Man updated the Gyges story, demonstrating the corrupting temptations of invisibility and the way it can sever our sense of personal responsibility for our actions.

Would invisibility confuse our morals? This is where the new work could get really interesting, because the researchers want to examine this ‘Gyges effect’. “We are planning to expose participants to a number of moral dilemmas under the illusion that they are invisible,” says Ehrsson’s co-author Arvid Guterstam, “and compare their responses to a context in which they perceive having a normal physical body.” I anticipate the worst here, not least because the Gyges effect seems already to operate in Internet trolling.

One thing is for sure: we should take with a big pinch of salt the authors’ suggestion that there is “the emerging prospect of invisibility cloaking of an entire human body being made possible by modern materials science”. This alludes to work on what are known as metamaterial invisibility cloaks4, 5. Not only is that work very far from achieving full cloaking in the visible spectrum (let alone in a wearable suit), but I also suspect that it will stay that way for the foreseeable future. No one is going to actually vanish any time soon.