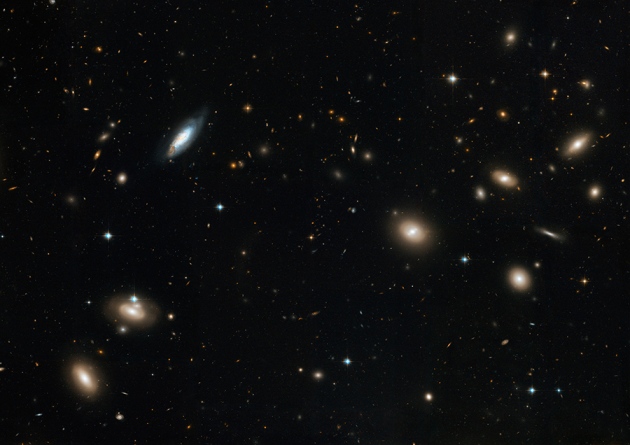 The Coma Cluster hosts hundreds of nearly invisible galaxies that are as big as our own.

It took 33.5 hours on one of the world’s largest telescopes, but for the first time astronomers have measured the motion of stars inside a newly recognized breed of dimly lit galaxy. The stars’ rapid speed reveals that the galaxy weighs as much as the far more brilliant Milky Way1.

“It’s an important measurement,” says Avi Loeb, chair of the astronomy department at Harvard University in Cambridge, Massachusetts, who was not involved in the study. “It’s a very challenging measurement, and they should be saluted for getting it.”

‘Ultradiffuse’ galaxies came to attention only last year, after Pieter van Dokkum of Yale University in New Haven, Connecticut, and Roberto Abraham of the University of Toronto in Canada built an array of sensitive telephoto lenses named Dragonfly. The astronomers and their colleagues observed the Coma galaxy cluster 101 megaparsecs (330 million light years) away and detected 47 faint smudges2.

“They can’t be real,” van Dokkum recalls thinking when he first saw the galaxies on his laptop computer. But their distribution in space matched that of the cluster’s other galaxies, indicating that they were true members. Since then, hundreds more of these galaxies have turned up in the Coma cluster and elsewhere.

Ultradiffuse galaxies are large like the Milky Way — which is much bigger than most — but they glow as dimly as mere dwarf galaxies. It’s as though a city as big as London emitted as little light as Kalamazoo, Michigan.

To study these celestial phantoms further, van Dokkum’s team observed one of the largest and brightest of them, a galaxy named Dragonfly 44 in the Coma cluster. The galaxy emits 1% of the light emitted by the Milky Way.

Using the 10-metre Keck II telescope atop Mauna Kea in Hawaii, the observers measured the width of a spectral line to deduce the galaxy’s mass. The more massive a galaxy is, the faster its stars move relative to one another. These motions broaden the spectral line through Doppler shifts, or the change in the wavelength of light given off by an object depending on its motion relative to an observer. By combining six nights of data, the astronomers found that the stars’ typical movements relative to one another clocked in at 47 kilometres per second.

This number indicates a massive galaxy, roughly the same weight as the Milky Way. If the distribution of the galaxy’s mass continues beyond its visible boundaries in the same way that it does in our own, Dragonfly 44 is about a trillion times more massive than the Sun. Furthermore, the galaxy possesses about 90 globular star clusters, 10 times more than a typical low-mass galaxy as dim as this one. This again argues that Dragonfly 44 is massive.

Galaxies this massive are usually the most efficient at converting their gas into stars. Yet Dragonfly 44 is a mere blip in terms of brilliance, what the researchers call a ‘failed galaxy’.

“It’s sort of a dark version of the Milky Way,” van Dokkum says. “For every 100 stars the galaxy should have formed, it only formed one.”

Ideas abound as to why ultradiffuse galaxies such as Dragonfly 44 failed to live up to their potential. Perhaps a quasar at the galaxy’s centre blasted gas away, or maybe hot gas in the Coma cluster stripped away the galaxy’s gas.

Loeb and Nicola Amorisco, also at Harvard, recently suggested that ultradiffuse galaxies might be low-mass galaxies that are born spinning fast, spreading their gas so thinly that they spawn few stars3. Loeb says that rapid rotation can also explain a massive ultradiffuse galaxy. However, the new observations indicate that Dragonfly 44 spins slowly. Still, Loeb suspects that it was born whirling rapidly and lost its spin after encountering other galaxies.

But van Dokkum says that the origin of these odd galaxies is a mystery: “The true answer is we really don’t know.”

This paper has now published in Astrophysical Journal Letters.