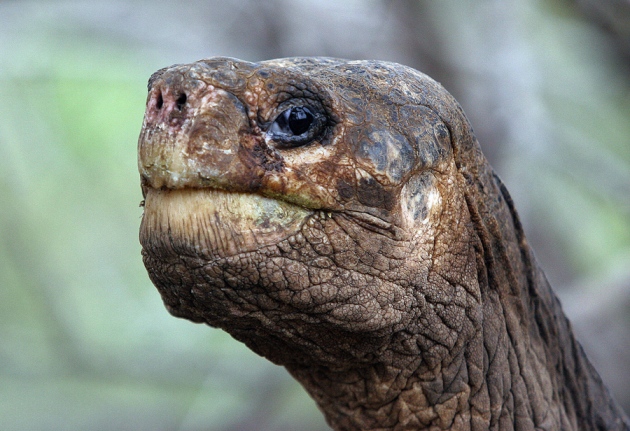 Lonesome George, who died last month, was the last of the Pinta giant tortoises.

Even in death, Lonesome George’s star power burns brightly. After the iconic giant tortoise died last month, Ecuadorian President Rafael Correa mourned the reptile’s loss in an address to the nation, expressing hope that “one day, science and technology will be able to reproduce him, to clone him”.

George was the last of the Pinta tortoises (Chelonoidis abingdoni), and it is too soon to know whether biotechnology can reverse the extinction. But scientists have made the first step: in the days after George’s death, they raced to keep his cells alive, collecting tissue and ferrying liquid nitrogen to his remote home in Ecuador’s Galapagos Islands to preserve samples that might one day yield a viable cell culture.

Even if the bid fails, George’s death is already offering hope for other giant tortoises. Last week, Nature joined experts in Puerto Ayora on the island of Santa Cruz for an international workshop dedicated to the memory of Lonesome George. The meeting aimed to galvanize efforts to prevent the loss of other Galapagos tortoise species and their habitats. “One species is very important, but most important are the ecosystems,” says Washington Tapia, director of conservation and sustainable development for the Galapagos National Park.

George was discovered on the island of Pinta in 1971, and was transferred to the Charles Darwin Research Station in Puerto Ayora the following year. Conservationists launched a long and frustrating campaign to persuade the reptile to mate with females from other Galapagos islands1. Hopes soared in 2008 when handlers discovered eggs in the enclosure he shared with two females, but the eggs were found to be unfertilized2.

On 24 June this year, Fausto Llerena, a ranger at the Galapagos National Park and George’s long-term keeper, found him slumped in his corral. Within hours, Llerena was helping to carry the tortoise’s corpse, trussed onto a wooden frame, into a chilled storage chamber.

In 2008, Ecuador was the first country in the world to amend its constitution explicitly to grant basic rights to nature and its inhabitants. As a consequence, George was accorded a full necropsy, performed by Marilyn Cruz, a veterinary surgeon who is the coordinator of Agrocalidad in Galapagos, the government agency that oversees agriculture and biosecurity on the islands. “The last thing we need to do is to investigate his tissues,” says Cruz, currently the legal guardian of George’s remains.

Cruz found nothing obviously wrong with the tortoise; she concluded that he probably died of natural causes. But, she says, George’s “liver and kidneys appear to have some abnormalities”, which the laboratories need to investigate in depth. Cruz also took a sample of George’s skin cells for culturing; they could eventually be used to generate stem cells and sex cells, or in reproductive cloning.

But the cells had to be frozen within days of George’s death. Establishing a viable cell culture “is highly correlated with the freshness of the sample”, explains Oliver Ryder, a geneticist at San Diego Zoo in California and champion of the Frozen Zoo, a facility containing cryo­preserved cell cultures from more than 9,000 individ­uals representing nearly 1,000 endangered species. Ryder arranged for colleagues in San Diego to deliver tissue-culture medium and the cryo­protectant dimethyl sulphoxide to Ecuador on the first available flight.

Cruz hurried to secure a local supply of liquid nitrogen. There were two liquid nitrogen tanks on Santa Cruz, used for freezing semen for the artificial insemination of cattle in the highlands. By commandeering one tank, Cruz got hold of enough liquid nitrogen to keep George’s cells safely frozen until top-up stock could be shipped from the mainland. Several liquid-nitrogen containers are now being relayed back and forth between the continent and the islands to keep the cells frozen until it is decided where they will be stored in the long-term. It remains to be seen whether the cells, if thawed, will yield a viable culture.

With George’s demise, ten species of Galapagos tortoise remain. The reptiles’ populations have suffered as a result of hunting, habitat destruction and the introduction of destructive species over the past few hundred years; some are now on the increase as a result of conservation efforts, but with a tortoise typically taking 20–30 years to reach sexual maturity, recovery has been very slow.

Last week’s workshop took several years to organize, and one subject on the agenda was what to do with George in the event of his death, and whether to collect his cells while he was still alive. With that no longer possible, the workshop focused on its main goal of thrashing out a ten-year plan to preserve the surviving animals (see ‘Endangered Galapagos giants’). 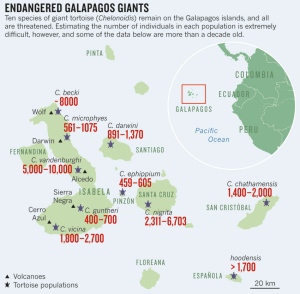 “What we’re trying to do is bring everyone together” to synthesize the perspectives of ecologists, geneticists and conservation managers, says workshop organizer Linda Cayot, science adviser to the Galapagos Conservancy in Fairfax, Virginia. The outcome, she says, will be a single set of recommendations that can be delivered to the Galapagos National Park.

The meeting also began work to review the status of the Galapagos tortoises on the International Union for Conservation of Nature (IUCN) Red List of threatened species. The tortoises’ Red List entries date from 1996 and are in urgent need of revision, says Peter Paul van Dijk, co-chairman of the IUCN/Species Survival Commission Tortoise and Fresh­water Turtle Specialist Group, who attended the meeting. Some Galapagos tortoises could have their threat categories downgraded. But the Pinta tortoise — still listed as ‘Extinct in the Wild’ — will be recategorized as ‘Extinct’.

To some visitors, the giant tortoises on one island of the Galapagos might look much the same as those on another. But as Charles Darwin came to appreciate after his brief sojourn in the Galapagos in 1835, each island or main volcano seems to have its own distinct type of tortoise, and all are diverging into separate species. Genetic differences suggest that Lonesome George’s own ancestors somehow travelled to Pinta from the island of Española about 300,000 years ago, and had been diverging from their relatives ever since.

From a management perspective, “each island is totally different”, says Cayot, who was one of the first researchers to carry out an in-depth study3 of the behavioural ecology of giant tortoises, in the early 1980s. “Pinzón has rats. Santiago had pigs and goats. Pinta had goats, but only for 20 years. Española had goats for probably 100 years,” she says. “That’s what makes Galapagos so much fun.”

One of the most fascinating populations lives around Wolf volcano at the northern tip of the island of Isabela. Over the past decade, Adalgisa Caccone, a geneticist at Yale University in New Haven, Connecticut, and her colleagues have been unpicking the ancestry of this mixed-up population. In a study4 based on blood samples from a few dozen individuals, she found evidence that tortoises from Española and San Cristóbal had crossed more than 250 kilometres of sea to reach Wolf, probably carried by pirates and whalers. Using DNA from museum specimens, the researchers went on to show5, 6 that Wolf is also harbouring descendants of the long-lost Floreana lineage and the recently lost Pinta one.

The researchers hope to mount a return expedition to Wolf volcano next year, in an effort to locate the Floreana- and Pinta-like tortoises. In theory, these animals could be taken off Wolf volcano for captive breeding.

Floreana has been heavily affected by habitat destruction and introduced species, and has been without tortoises for more than 150 years. But the Floreana-like tortoises on Wolf could help with a long-term project to restore the island’s ecology. The situation on Pinta is more urgent, and waiting for a captive-breeding programme to bear fruit may not be an option. Much of the island’s original vegetation is intact, but without tortoises — once the island’s dominant herbivore — there is a danger that some plant species could be choked out and lost.

If a rapid solution cannot be found using tortoises of Pinta pedigree, it looks increasingly likely that conservationists will introduce a species from another island. “Given that tortoises from Española founded the original population that landed on Pinta and evolved into the Pinta tortoises, I don’t see a problem with us repopulating that island with Española tortoises,” says Cayot.

The Española tortoise was once on the brink of extinction, but now there are more than 1,700 of the reptiles, and conservationists can afford to consider transferring some of them to Pinta. This kind of deliberate introduction is unprecedented in the Galapagos, however, so researchers are cautious. As a precursor experiment, almost 40 sterilized hybrid tortoises have been introduced to Pinta, and are being tracked by satellite to see what impact they have on the ecosystem.

For Cayot, introducing a breeding population of tortoises to Pinta is a much more rational proposal than a plan that relies on cloning Lonesome George. “In 100,000 years, through evolutionary processes, we’ll have a Pinta tortoise in Galapagos,” she says. “100,000 years is a time frame I can deal with.”