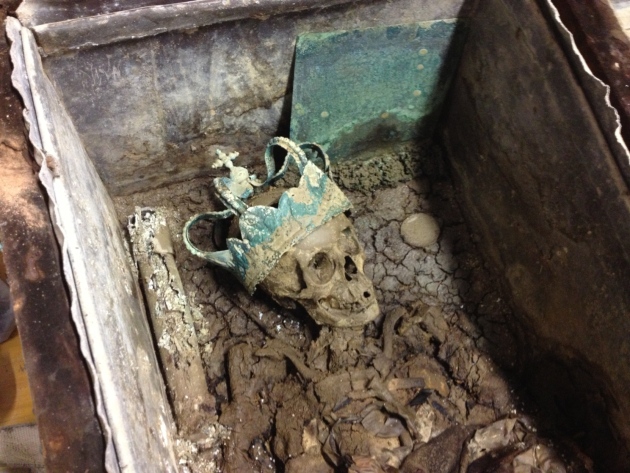 The skeleton of Anna Maria Luisa de' Medici offers clues as to how she died.

In 1743, the last member of the family that had ruled Florence for almost 300 years died a slow and painful death. Historical documents suggest that Anna Maria Luisa de’ Medici suffered from syphilis or breast cancer. But a first look at samples of her bone suggests that syphilis may not have killed her.

In 1966, the tombs of the Medici family were swamped in mud during severe flooding of Florence, which many feared had damaged the bodies. But Anna Maria Luisa's skeleton was found to be mostly intact when it was exhumed last October as part of a research collaboration between the University of Florence in Italy and the Reiss Engelhorn Museum in Mannheim, Germany. The first pictures from the exhumation were released at a press briefing today.

An exhibition, ‘The Medici: people, power and passion’, opens at the Reiss Engelhorn Museum on 17 February — the day before the 270th anniversary of Anna Maria Luisa’s death. It brings together art, history and science to present the lives of the Medici family, which ruled Florence from the fifteenth century until the death of Anna Maria Luisa's brother in 1737 and which produced four popes.

Anna Maria Luisa married Johann Wilhelm II, ruler of the Electoral Palatinate, a territory of the Holy Roman Empire that is now in Germany's Rhineland. After her husband's death in 1716, she returned to live in Florence; however, researchers were surprised to discover that she was buried in the crown of the Palatinate, rather than the death crown of the Medicis.

Her body was exhumed for a week before being reburied. During that time, scientists made a three-dimensional scan of the skeleton, which enabled them to create an exact replica of it. They removed two medallions from the coffin for restoration, and took a piece of bone for testing.

Albert Zink, a biological anthropologist at the European Academy of Bolzano in Italy, is carrying out a DNA analysis of Anna Maria Luisa's bones and material from a pot believed to contain her entrails, which according to Medici tradition would have been buried separately from her body. Zink also analysed the DNA of Ötzi, the 5,200-year-old iceman found in the Alps in 1991.

Anna Maria Luisa's skeleton “does not indicate late-stage syphilis, which is characterized by skull remodelling and bone outgrowth”, says Zink. But, he adds, it does not rule out earlier stages of the disease, which can in some cases result in organ failure and death.

“Full DNA-sequence information may allow us to identify any susceptibility genes for breast cancer,” he says, “but we don’t yet know if the sample is of sufficient quality for this since the tomb environment had been very damp.” Zink adds that if the material in the pot is confirmed to be from Anna Maria Luisa, it will provide more samples for DNA testing.