Eighteen hours after a massive earthquake ripped apart the sea floor off the coast of Tohoku, Japan, on 11 March last year, tsunami waves smashed the coast of Antarctica hard enough to knock loose giant icebergs. Over the next few weeks, as an estimated 19,000 people were reported dead or missing in Japan, radioactive isotopes from the crippled Fukushima Daiichi nuclear power plant circled the globe. The earthquake, tsunami and extended nuclear crisis that devastated Japan affected the entire planet and continue to have global repercussions. This week, Nature dissects what has been learned about the event over the past year and how those lessons can help societies to prepare for future disasters. 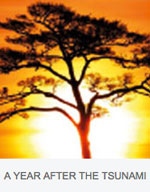 Efforts to rebuild the Tohoku coastline have provoked debate about how to best protect Japan from future tsunamis through zoning and physical defences (page 141). Meanwhile, Japan and the United States are upgrading their systems of sensors that forecast these destructive waves (page 144). Seismologist Hiroo Kanamori says that tsunami forecasters should improve their ability to analyse both the magnitude and mechanism of an ongoing earthquake (page 147). And geologist Thorne Lay examines how a spate of giant earthquakes in the past decade has revealed gaps in seismological knowledge (page 149).

Researchers are accumulating a vast amount of data on the causes and impacts of the Fukushima disaster — but some worry that their efforts are being undermined by a public loss of trust in the government and its scientists (page 138). And energy-policy expert Peter Bradford argues that countries should develop sensible policies towards nuclear power, rather than shunning it in a rash reaction to the Fukushima meltdowns (page 151).

Scientists have had a key role in helping Japan to recover and gird itself for the next disaster. But even this nation — one of the most at risk for earthquakes and tsunamis, and so one of the best prepared — has far to go. Other countries would do well to heed the lessons.