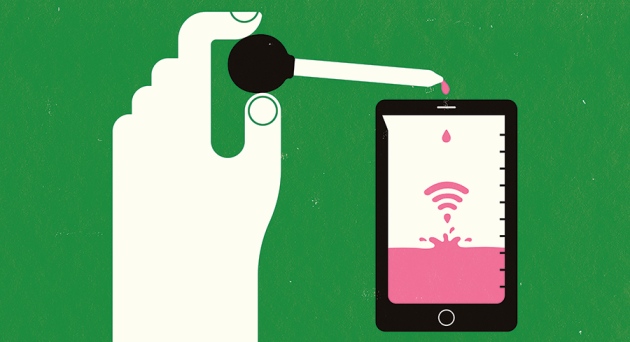 Out of town for the US 4 July holiday, Kyle Turner got news that no lab manager wants to hear: his freezer was dying.

“I was in western Massachusetts and getting these alerts on my phone,” says Turner, who manages an evolutionary-biology laboratory at Harvard University in Cambridge, Massachusetts. Freezers are where life-science laboratories house the fruits of their research; to lose them is to lose everything. Turner called the technicians at the Harvard University Operations Center and asked one of the lab members still in Cambridge to be on site in case precious samples needed to be moved. And then he watched the technicians' progress in real time, using his iPhone.

This remote monitoring was all thanks to a technology innovation that is sweeping the consumer marketplace and has now reached the research laboratory: the Internet of Things (IoT).

The IoT is the idea that it is not just computers that can be hooked up to the Internet, but everyday objects as well. In so doing, they acquire new functionality, says Felix Wortmann, scientific director of the Bosch IoT Lab at the University of St Gallen in Switzerland, which studies the IoT and its impact on business. Add Wi-Fi and a motion sensor to a light bulb, he says, and you have a remote alarm system; add Wi-Fi to a stereo system, and you can control your music from your phone.

In the consumer marketplace, the concept applies to web-connected devices such as thermostats, televisions and cars. But until a few years ago, laboratory equipment could not be linked in the same way. The emergence of connected instruments and equipment promises to untether researchers from the laboratory — letting them fine-tune experiments and analyse data remotely. It allows lab managers to monitor instrument use and catch potential equipment failures before they happen. But security and economic concerns, and the inevitable teething pains that are inherent in any evolving technology, are moderating enthusiasm.

Manufacturers have been offering remote freezer monitoring and automatic data logging for years. But the IoT allows the integration of different instruments, from different vendors, into a single integrated platform, says Andreas Hochberger, who is in charge of emerging technologies at Eppendorf AG in Hamburg, Germany. In 2015, Eppendorf was one of a dozen German companies that contributed to the smartLAB project — a model lab of the future based on the IoT. Another smartLAB is planned for the Labvolution 2017 conference to be held in Hanover in May.

At the heart of the smartLAB, says project leader Sascha Beutel, who is at the Institute of Technical Chemistry of Leibniz University in Hanover, is a laboratory information system to which all lab components will be connected and controlled, from 'intelligent', self-cleaning lab benches to smart safety goggles that can project chemical safety information and augmented-reality displays. “To our knowledge, this is the first attempt ever made to make a whole laboratory digitally supported and interactive,” says Beutel.

Existing commercial implementations of the IoT are less comprehensive. TetraScience, which was founded in 2014 and is supported, in part, by Digital Science (a consultancy in London operated by Holtzbrinck Publishing Group, which also has a share in Nature's publisher), has 60 academic and industry clients, says chief executive and co-founder Alok Tayi. At Harvard University, 19 labs use the service, which connects instruments to an online dashboard, says Quentin Gilly, senior coordinator of the Harvard University Office for Sustainability's Green Labs programme. The labs have connected more than 100 devices to the web, mostly incubators and freezers; Turner’s lab has used the system to connect 11 of its instruments.

Peter Girguis, who studies the biology of deep oceans, has five freezers and refrigerators at Harvard hooked up to the TetraScience grid. These units are stocked with irreplaceable samples collected during tours on research vessels stationed anywhere from the mid-Atlantic Ocean to the South Pacific. “It costs millions of dollars to get these samples,” he says.

Many of the lab's most precious samples are stored in −80 °C freezers, which are monitored using a system that automatically notifies Harvard's Operations Center when a freezer is over temperature. But the lab's −20 °C freezers and refrigerators are not compatible with the system, and so no one is alerted if they fail. When the opportunity arose to test the TetraScience system, the lab jumped at the chance, says Jennifer Delaney, who manages Girguis's lab. “It didn't take too much convincing.”

“The goal is a holistic software platform which can tie together people, data and devices.”

TetraScience uses a Wi-Fi module, about the size of a deck of playing cards, that can be hooked up either to an external sensor or through an instrument's data port. Sensors can monitor temperature, humidity, and carbon dioxide and oxygen levels, as well as vibration, light intensity and mass air flow. This type of equipment can supplement internal sensors to ensure that crucial hardware such as incubators and hypoxic chambers are performing as expected. Direct connection through an instrument's data port, allows devices such as balances, pH meters, and even high-performance liquid chromatography systems to be monitored or, in some cases, controlled. Not only can scientists monitor those instruments but they can also stream data to electronic lab notebooks, track the device's usage and workload, and control experimental workflows, Tayi says. “The goal is a holistic software platform which can tie together people, data and devices.”

TetraScience users access those data through a web browser. The page lists all connected devices and their status, and lab managers can set temperature thresholds and alarm options. The system also displays each sensor's history, so users can see, for instance, if a freezer has been slowly warming over several days — a sign, says Gilly, that it may require a service.

Several TetraScience users have expressed frustration over dropped Wi-Fi connections, which sometimes need to be reset manually. The data aren't lost — the hardware can continue to log them for weeks, dumping them back into the system once connectivity returns — but according to Tayi, the company has updated its hardware to be “far more reliable in terms of connectivity” and has added the option of sending data over Ethernet cables and mobile networks.

The cost of monitoring

Unfortunately for Girguis, his lab has 20 refrigerators and −20 °C freezers, but only 5 sensors. One of those that was not being watched was a small under-bench freezer storing an archive of water samples and DNA sequencing libraries, among other things. Several months ago, a student walked past the freezer and “noticed an odd smell”, Delaney says. “It had thawed, everything was covered in mould, it was pretty disgusting, and yeah, everything had been lost.” Girguis estimates that the value of the DNA sequencing libraries alone was about US$4,000.

Girguis did consider buying more TetraScience sensors, but the introductory price he was quoted (about $400 per device per year), was beyond the lab's budget. Turner's lab has likewise decided to forgo TetraScience in favour of a consumer-grade IoT system from Wisconsin-based La Crosse Technology, which costs $12 per freezer per year. Tayi says that TetraScience cannot comment on pricing.

Larger firms are also embracing the IoT. US biotechnology company Illumina has the BaseSpace Sequence Hub, which allows researchers to remotely monitor next-generation DNA sequencing runs, and US lab equipment company Thermo Fisher Scientific has Thermo Fisher Connect, which can track and process data from six different types of equipment, including real-time and digital polymerase chain reaction (PCR) thermocyclers and mass spectrometers. The system will support a dozen more instruments, including ultralow temperature freezers and even a smart electronic pipette, by the end of 2017, says the company's chief technology officer Mark Field, who is based in Carlsbad, California. Researchers can create a pipetting programme online, which can then be pushed to the lab's pipettes. Such a device could precisely track what the user does, providing better experimental documentation and possibly reducing errors by, for example, indicating which plate well lab technicians should be pipetting into next.

With users at more than 10,000 institutions, the Thermo Fisher system is free (although some analysis apps on the platform have a fee). Users can access the system through a web page, and monitor equipment using a dedicated iPhone or Android app called Instrument Connect. The app has a demo mode that allows users to 'track' a fictitious, real-time PCR run.

For Jared Farrar, an MD–PhD student at Virginia Commonwealth University in Richmond, who uses the Thermo Fisher system to monitor his real-time PCR runs, the technology allows him to spend more time with his family. At weekends, he says, he can drop into the lab, set up a few reactions, then monitor their progress from his phone to see when he needs to return to swap plates. “The greatest benefit is it takes me out of the lab,” he says.

Iain MacLeod, co-founder and chief scientific officer at Aldatu Biosciences in Boston, Massachusetts, which develops assays to monitor HIV drug resistance, uses Thermo Fisher Connect to monitor and troubleshoot real-time PCR runs in Boston and for field work in Botswana. MacLeod recalls analysing runs on his commute home, sharing screenshots with his co-founder en route. “It's very quick and easy to do,” he says.

But with that convenience comes safety and security concerns. By accessing an IoT-enabled thermostat, for example, a hacker may be able to work out when somebody is on holiday, possibly leaving them vulnerable to break-ins. In a laboratory, hackers could damage hardware or samples, for instance, by adjusting the settings on a freezer or incubator. Girguis says he would probably think twice before relying on an IoT device as the main means of protecting equipment that could be dangerous if misused.

Still, for many researchers, those theoretical risks are likely to pale in comparison to the real threat of a freezer dying unexpectedly. From his hotel room, as Turner watched colleagues struggle with the troublesome freezer, it quickly became clear that their efforts were being wasted. He arranged to transfer the lab's samples to a backup freezer, averting catastrophe. “If we hadn't had these devices, we would have come in Tuesday morning and found a big puddle on the floor and a freezer full of thawed samples.”