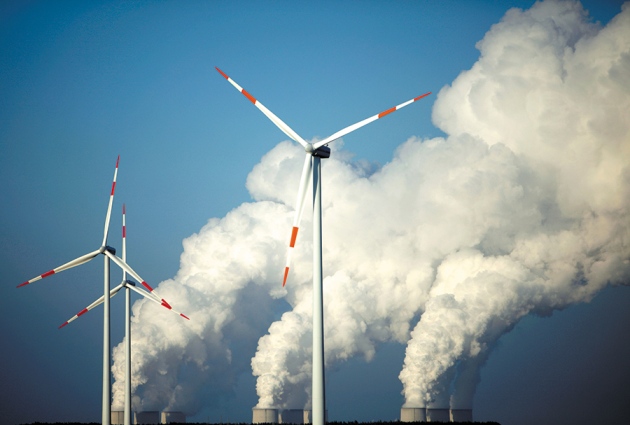 Wind energy and other renewables will replace oil, gas and coal as countries phase out fossil fuels to meet their climate-change commitments.

The world's energy system needs rebuilding. The Paris agreement to keep global warming “well below 2 °C above pre-industrial levels” demands that we replace fossil fuels with solar, wind, geothermal and biomass energy. The price tag is vast1: investing US$120 trillion in energy projects between 2016 and 2050, at twice the current annual rate of $1.8 trillion a year, will deliver a 66% chance of achieving the Paris target. We must halve oil production and stop using coal to produce electricity.

The impact on the world's economy will be immense, and the shape of the energy sector will change fundamentally. Fossil fuels accrue their value mainly at the source — oil, gas and coal producers are among the richest companies in the world. But energy from the Sun, wind and tides is abundant and effectively free. Value can be derived from these sources by supplying devices and services to consumers and industry. In economic terms, energy assets will move further up the value chain, from commodities to technologies2.

There will be winners and losers. Technology leaders of nations in the Organisation for Economic Co-operation and Development (OECD) and China will benefit most. Countries lacking technology and capital, mainly in the global south, will lose out. Those that are rich in fossil fuels, such as Russia, Saudi Arabia and Australia, could become unable to sell oil or coal. The knock-on effects will spiral — the falling tax revenues and account balances of countries and companies with depreciating assets could spell another global financial crisis.

To avert this, the low-carbon transition needs to be governed globally. Three factors are key: credible and legitimate leadership; information about climate-related risks to guide investment; and global partnerships to advance low-carbon technology.

In my role as an academic adviser to the Energy Sustainability Working Group under Germany's 2017 presidency of the G20, I suggest that this coalition of nations is well placed to take the helm. A global body comprising the 20 largest economies, the G20 consumes 95% of the world's coal, more than 70% of its oil and gas, and is responsible for 85% of global investment in renewables1. It includes a mixture of wealthy and emerging economies, with and without natural resources.

G20 leaders should revisit the network's working groups and structures, and examine how they can help to recast the world's energy system while keeping the global economy stable.

Pension funds, banks, companies, municipalities and private households all hold assets in fossil energy. The total value of all fossil reserves is up to $100 trillion3 — roughly five times the gross domestic product of the United States in 2016. Burning all these reserves would release three times more carbon dioxide than the Paris accord permits (roughly 900 gigatonnes of CO2 equivalent). So at least two-thirds of these assets will have to be written off: 80% of current coal reserves, one-third of oil and half of natural gas4. 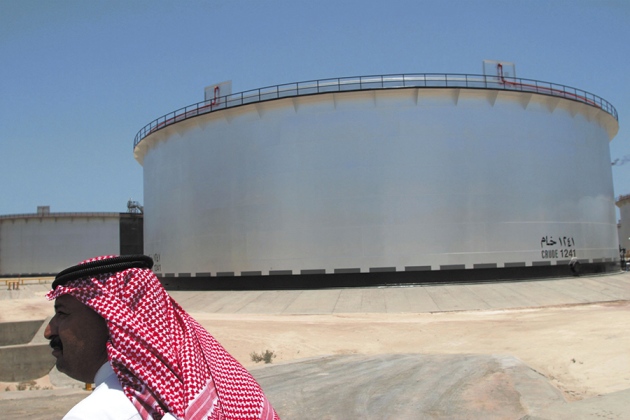 Oil-rich countries such as Saudi Arabia will take decades to reduce their reliance on fossil fuels.

Capital investments in old energy infrastructure will not be recouped. The global fleet of coal-fired power plants (which produces almost 2,000 gigawatts of power; see endcoal.org/global-coal-plant-tracker) will have to be retired by 2050. Thousands of mines, wells, pipelines and refineries will become redundant1. Losses will spread beyond investors — fossil fuels account for 20–30% of the worth of major stock exchanges around the world5. This 'stranded asset' problem will leach into the global financial system and affect everyone.

Trade flows and tax systems will change. Fossil fuels and mining products accounted for 18% of global exports in 2015 (ref. 6), with oil the most traded commodity. Russia, for instance, generated 36% of its state funds by taxing oil and gas production and export in 2016 (ref. 7); in Saudi Arabia, exports of crude oil account for 73% of its total revenue (see go.nature.com/2qmzxaa). Importing nations tax the consumption of mineral products in the form of energy taxes; these account for roughly 5% of total governmental revenues in the European Union, for example (see go.nature.com/2rdensu).

The economic opportunities of the low-carbon transition are widely reported. Solar, wind, wave, geothermal and storage technologies, and the countries using and deploying them, are obvious winners. A 2015 analysis3 by the Citi financial group suggests that aggressive upfront spending on low-emissions technologies and energy efficiency reduces fuel bills later, and is cheaper compared to inaction — even without considering the damages that would be avoided by lessening climate change. A 2016 study8 by the International Renewable Energy Agency (IRENA) found that doubling the share of renewables in the energy mix by 2030 would boost global economic growth by more than 1%, and create jobs and taxable income.

The economic risks are less appreciated. Countries that hold or export fossil resources face a double whammy: they cannot sell their main economic asset and its faltering value prevents them from tapping financial markets to set up alternative industries. Entire nations could become 'stranded'9— either tempted to cash in by selling more of their fossil fuels now while they can, or to monetize their reserves. For instance, Saudi Arabia plans to float its national oil company, Saudi Aramco, on the stock market next year.

Although some energy-rich countries such as the United Arab Emirates have started to diversify their economic bases, the low-carbon transition could happen sooner than their economies can adapt (see 'Energy shift'). These countries are locked into carbon-intensive development patterns, so reducing their reliance on fossil resources will take decades rather than years. It will require political capital, economic steering and investment. And because some oil-rich states distribute their wealth to secure the positions of powerful elites, such countries could face domestic unrest as well as economic hardship. 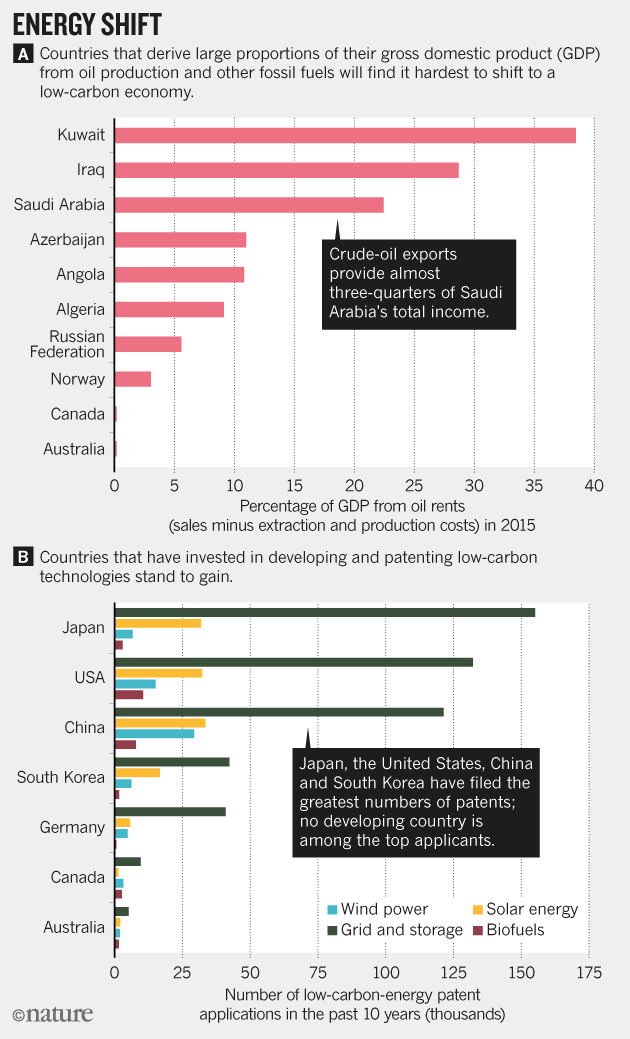 When technology takes over as the economic driver in the energy sector, developed economies will have the competitive edge. OECD countries and China dominate global energy innovation, according to patent counts. These countries' economies will benefit most from investments in energy research and development, and from the spillover of related knowledge into other sectors such as transport. Although some low-carbon technologies such as solar panels are spreading globally thanks to falling costs, others such as carbon capture and sequestration, advanced biofuels from organic waste or offshore wind are restricted by intellectual-property rights or high costs.

Non-OECD countries and developing nations need access to green and smart technology, but they often lack an investment climate that attracts capital and may have few institutions that cultivate domestic enterprises and seed investors. Some emerging economies such as India are intent on boosting decentralized systems of renewable power generation. But deployment on large scales remains a challenge in most developing nations.

Three things are needed to steady the global economy during the transition to low-carbon energy.

First, credible and legitimate global leadership is necessary to balance interests. The G20 is well placed to offer this. It includes nations that lead in technology and those that lag behind; industrialized economies (such as the United States and those in the European Union); rising powers (China and India); resource-rich nations (Saudi Arabia, Russia) and resource-poor ones (Japan). The G20's regular meetings of finance ministers should become the steering committee for the low-energy transition.

“Countries could face domestic unrest as well as economic hardship.”

Second, a global mechanism is needed to share information about climate-related investment risk. Investors will be able to plan and make better choices if they know the chances of an asset losing its worth. Financial markets need to be able to judge an energy investment over its lifetime. For example, some major insurers and pension funds (such as AXA in Paris, Allianz in Munich and California's health-benefits agency, CalPERS) are veering away from holdings in coal companies. Information about the trajectories of low-carbon policies could be provided by the G20's Task Force on Climate Related Financial Disclosures, an expert group established in 2015. This task force should be made permanent and produce regular reports like the 2017 study by the International Energy Agency (IEA) and IRENA1, commissioned by the German G20 presidency.

Third, global partnerships are needed between technology leaders and laggards to advance the take-up of low-carbon technologies. The G20 Energy Sustainability Working Group, the coalition's main body for sustainable growth and clean energy, should champion these partnerships. It could make them a G20 policy goal alongside promoting energy efficiency or the end of fossil subsidies. The partnerships could use existing avenues — including the IEA's International Low-Carbon Energy Technology Platform and the Low-Carbon Technology Partnerships initiative, a business-focused forum — to discuss and share knowledge about best practice. Helping 'low-carbon losers' benefit from the shift up the energy value chain — through technology transfer, for example — is the best way to neutralize their calls for compensation for lost revenues.

These measures alone will not close north–south divides. But they will aid sound low-carbon governance and energy justice10 in a fragile global community that is already strained by inequality.