When the world’s nations gather in Paris this December to negotiate a climate treaty, their efforts will cap a 25-year-long journey plagued by detours and dead ends.

The quest started in 1990 when the United Nations launched talks aimed at producing the first global climate agreement. In June 1992, more than 170 nations gathered for the Earth Summit in Rio de Janeiro, Brazil.

In Rio, they adopted the United Nations Framework Convention on Climate Change (UNFCCC), which declared: “The ultimate objective of this Convention … is to achieve … stabilization of greenhouse gas concentrations in the atmosphere at a level that would prevent dangerous anthropogenic interference with the climate system.”

The Rio convention was a historic step, but it contained no binding commitments to slow global warming. Would the world act in time?

“We don’t have another 20 years to squander,” said Maurice Strong, organizer of the Rio summit. More than 20 years later, greenhouse-gas emissions continue their relentless rise.

What is the greenhouse effect?

Water vapour, carbon dioxide and other gases in the atmosphere keep the planet warmer than it would otherwise be. Solar radiation warms Earth’s surface, which radiates infrared energy. Greenhouse gases absorb and re-emit infrared radiation. Some of that energy warms the atmosphere. By adding extra CO2, methane and other pollutants, humans are strengthening the greenhouse effect.

In 1896, the Swedish scientist Svante Arrhenius calculated how changes in the amount of CO2 in the atmosphere could warm or cool Earth. He later suggested humans were raising the planet’s temperature and it would become noticeable in a few centuries. The changes came much faster than Arrhenius anticipated.

On 23 June 1988, NASA scientist James Hansen told a US Senate hearing that humans were having a clear impact by burning fossil fuels such as coal, oil and natural gas. “The greenhouse effect has been detected, and it is changing our climate now,” he said.

It was a wake-up call to the world. That very day, the temperature in Washington DC hit a record high of 98 °F (37 °C). The country was suffering one of its worst droughts ever, and uncontrollable fires raged in Yellowstone.

Fossil fuels are not the only cause of warming. Deforestation also contributes by releasing the CO2 stored in trees. On 22 December 1988, the assassination of Brazilian activist Chico Mendes drew attention to the rampant destruction of the Amazon forest.

Alarmed by the growing problem, the United Nations created the Intergovernmental Panel on Climate Change (IPCC) in 1988 to assess the issue.

At the IPCC’s first meeting, the director of the United Nations Environment Programme, Mostafa Tolba, implored scientists to use the time left in the century — just 4,000 days — to deal with climate change. Hopes were high because the world had already taken steps to solve one environmental disaster.

In 1987, nations adopted a treaty to protect the ozone layer. But reaching that agreement was relatively easy because only a handful of companies in a few countries produced ozone-destroying compounds. In the case of global warming, everyone has a hand in the problem because so many activities generate greenhouse gases. So curbing greenhouse-gas pollution is infinitely more difficult.

In its first report, the IPCC forecasted that if current trends continue until 2100, the world would be 4 °C warmer than it was in 1850. Swelling oceans would be a major problem because half of humanity inhabits coastal regions. A monstrous cyclone drove that point home in 1991 when it killed more than 140,000 people in Bangladesh.

The Rio treaty was clearly not enough, so nations gathered in 1995 in Berlin to negotiate a stronger accord. But the assembled countries couldn’t agree on specifics.

Island nations wanted rich countries — the source of most of the problem — to cut emissions by 20%. The US demanded that developing nations agree to future commitments. China said developed nations had to act first because they had caused the problem.

In December 1997, countries gathered in Kyoto, Japan, to hash out a new treaty. But they couldn’t agree on how much developed nations should trim their emissions. The European Union called for a 15% cut. Island nations demanded a 20% cut. Japan proposed a 5% cut. And the US wanted developing countries to act, too.

After working through the final night, negotiators reached an agreement called the Kyoto Protocol. It was the first time that countries promised to rein in greenhouse-gas pollution by specific amounts.

The Kyoto Protocol split the world in two: industrialized countries with emissions limits and developing countries without. The protocol also allowed for flexibility in how countries met their commitments. Developed nations could get credit for reducing emissions in poorer ones.

Developed countries promised to cut their overall emissions to 5.2% below 1990 levels for the period 2008–12. Each country had its own target.

But the cracks in the treaty were clear from the start. The US refused to ratify the pact because of concerns that its economy would suffer while developing nations increased their pollution without limits.

In 2001, US President George W. Bush rejected the agreement, saying: “The Kyoto Protocol was fatally flawed in fundamental ways.”

Soon, world events made clear how limited the protocol was. In 2006, China passed the US to become the world’s largest carbon emitter. Canada formally withdrew from Kyoto in 2011. Meanwhile, global temperatures continued to soar.

Throughout the climate negotiations, scientists have tried to show what kind of world awaits future generations if global warming continues. Such forecasts come from complex climate system models, which divide the globe into millions of cells and simulate the atmosphere, oceans and biosphere in 3D.

Researchers have confidence in their models because they can reproduce features of past and current climates. Looking forward, the models see red.

Although scientists agreed humans were warming the planet, some politicians denied that fact. “With all of the hysteria, all of the fear, all of the phony science, could it be that man-made global warming is the greatest hoax ever perpetrated on the American people?” asked US Senator James Inhofe, in 2003.

Other politicians defended climate science. “We should investigate the well-funded effort by certain oil companies to manufacture controversy and cast doubt on the reality of global warming,” said US Representative Henry Waxman in 2006.

In 2003, Europe suffered a prolonged heat wave that killed an estimated 70,000 people. The impacts were getting clearer. The IPCC declared in 2007: “Warming of the climate system is unequivocal.” Later that year, the IPCC was awarded the Nobel Peace Prize for its efforts.

While the science raced ahead, the negotiations dragged on. Nations met in Bali in December 2007. The talks were so fractious that at one point, the chairman broke down in tears. But a deadline was set for a treaty in 2009 that would include new commitments by developed countries.

For the first time, developing nations agreed to “mitigation actions” of their own choosing to limit climate change. And participants decided the next treaty would address deforestation.

In the run-up to the 2009 Copenhagen summit, hopes for a new climate treaty surged. But so did concerns about the scale of the problem. Studies suggested that carbon emissions should not exceed 1 trillion tonnes if nations wanted to limit global warming to 2 °C, the goal that would avert catastrophic change. Yet the world had already used up more than half of that budget, and was burning through the rest at 9 billion tonnes a year.

In 2009, activists organized demonstrations around the world to push for tighter emissions caps. Some demanded reducing CO2 levels to 350 p.p.m., which would limit future warming and lessen the risks of dangerous impacts like extreme sea-level rise and mega-droughts.

Despite the frenzy of attention, the Copenhagen negotiations failed to deliver a treaty. Western nations blamed China for blocking substantive emissions limits. Developing countries charged that they had been left out of crucial discussions. A compromise was brokered by a handful of major emitters, but it was so controversial that much of the world didn’t accept it.

A year later, nations met in Cancún and adopted the provisional accord reached in Copenhagen. The Cancún agreements set a target to limit warming to no more than 2 °C. They also created a Green Climate Fund, supported by developed countries to help poorer ones reduce emissions and adapt to climate change. Countries are expected to contribute US$100 billion a year to the fund by 2020. And for the first time, all countries agreed to reduce emissions according to their different responsibilities and capacities.

As the negotiations have crawled along, the world has hurtled through changes. In October 2011, the global population topped 7 billion people. A heat wave in Russia in 2010 killed roughly 55,000 people and stoked wildfires across the country. In 2012, 97% of the Greenland ice sheet showed signs of melting — the first time such an extensive area had thawed. In November 2013, Superstorm Haiyan became the strongest on record to make landfall when it slammed into the Philippines with winds of 315 kilometres per hour. And the Arctic Sea set a record in 2012 for the least amount of ice coverage ever documented.

At climate talks in 2013, Philippine delegate Naderev Sano broke down over his country’s devastation and the lack of progress in negotiations. “By failing to meet the objective of the convention, we may have ratified the doom of vulnerable countries,” he said.

On 9 May 2013, daily atmospheric measurements of CO2 at a station in Hawaii topped 400 p.p.m. for the first time in, perhaps, millions of years.

James Hansen, who had sounded the alarm over global warming, was arrested several times for protests over the proposed Keystone XL pipeline.

In September 2013, the IPCC reported that “Human influence on the climate system is clear.”

In 2014, China overtook the European Union in per capita emissions of CO2.

The US and China brokered a historic climate deal in November 2014. The US pledged to cut greenhouse-gas emissions 26–28% below 2005 levels by 2025. China said its emissions would peak around 2030.

These became the basis for what the two countries submitted to the UNFCCC as their proposed emissions targets in advance of the Paris summit. So far, more than 160 countries have submitted their pledges.

2014 set the record as the hottest year ever recorded for global land and sea surface temperatures.

Nations will face a test again when they meet in Paris in December: can they take significant steps to limit climate change?

The calls for action — and the warning signs — grow stronger. “Climate change is a global problem with grave implications …. It represents one of the principal challenges facing humanity in our day,” said Pope Francis.

“Although we’re moving in the right direction, it is clearly not enough,” says Christiana Figueres, executive secretary of the UNFCCC.

Fires in Indonesia ravaged the country and pumped half a billion tonnes of carbon into the air, more than Japan produces in a year.

The Paris pledges will probably limit warming to below 3 °C. But much stronger action is needed to stay under 2 °C. Countries will probably blow through the trillion-tonne carbon budget before 2040.

CO2 continues to thicken the skies. Concentrations may never again drop below 400 p.p.m. Even if global warming does not pass 2 °C, the world might still face calamitous impacts, like parts of the Antarctic ice sheet sliding into the ocean within a few centuries.

The world has come a long way since Kyoto. This year, all countries are setting their own goals, which may make the targets more realistic. And nations may agree to step up their commitments periodically. The framework to fix the planet is coming together, but it is fragile and far too small. The job of finishing the task will fall to future generations. 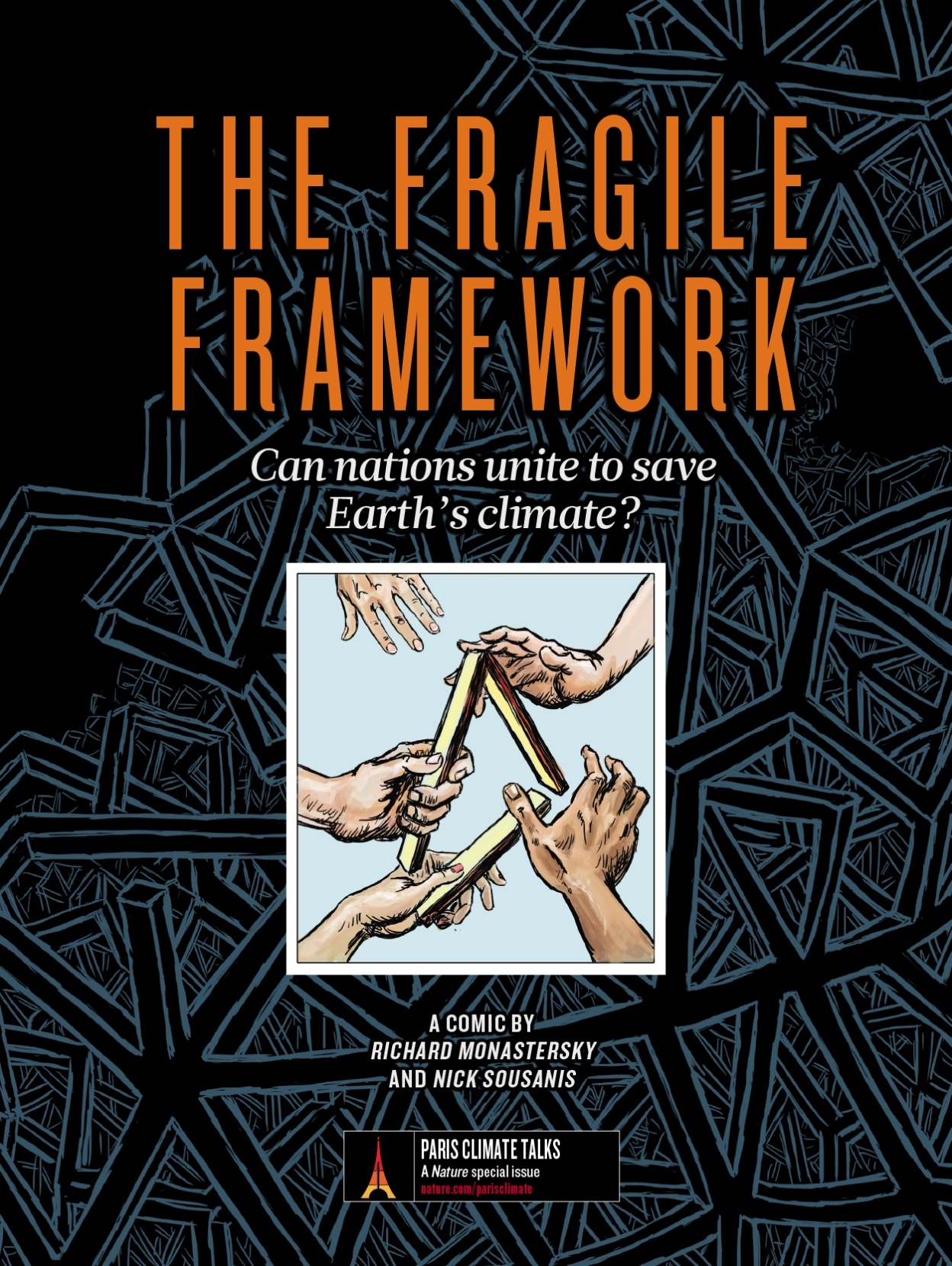 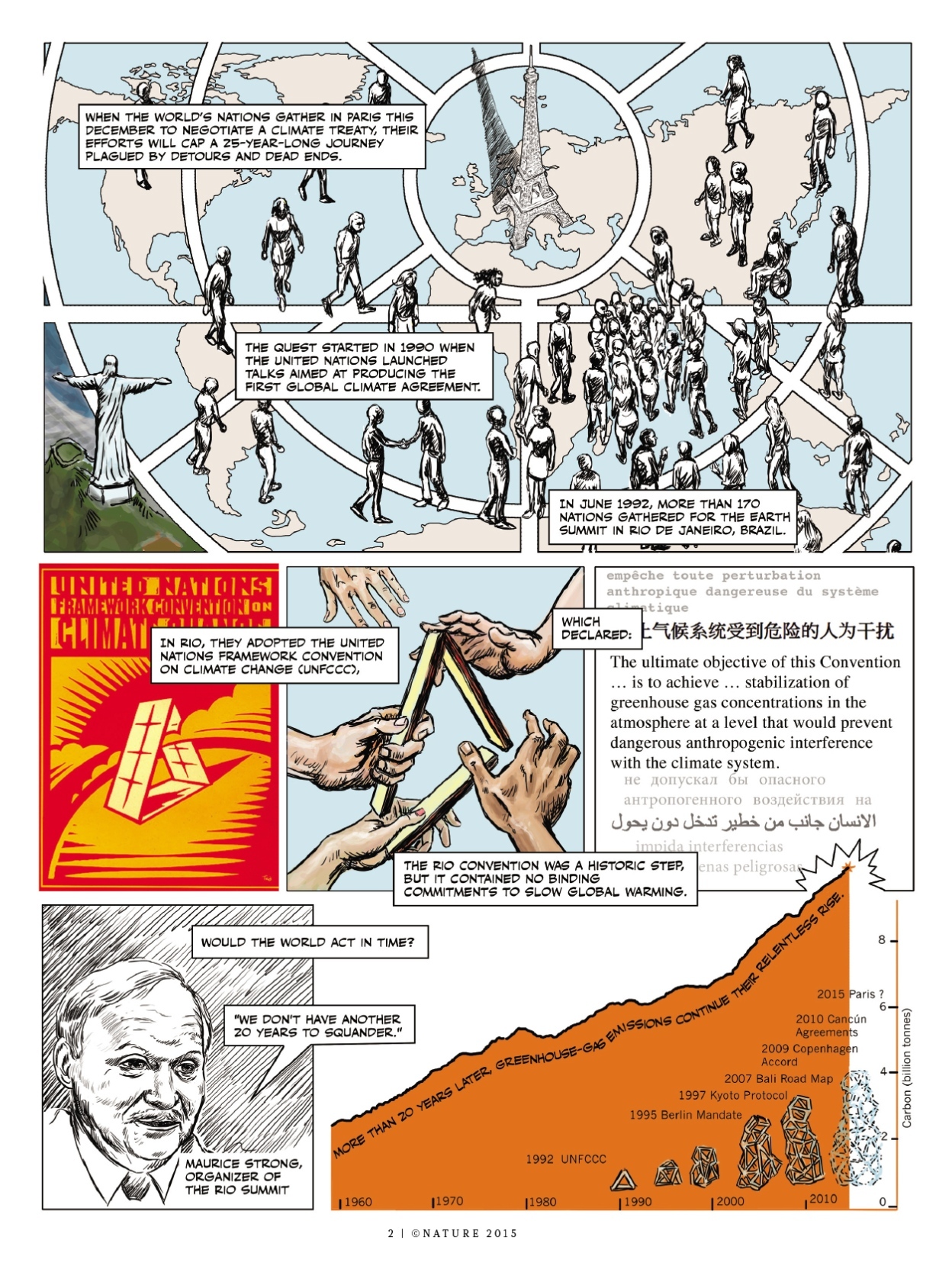 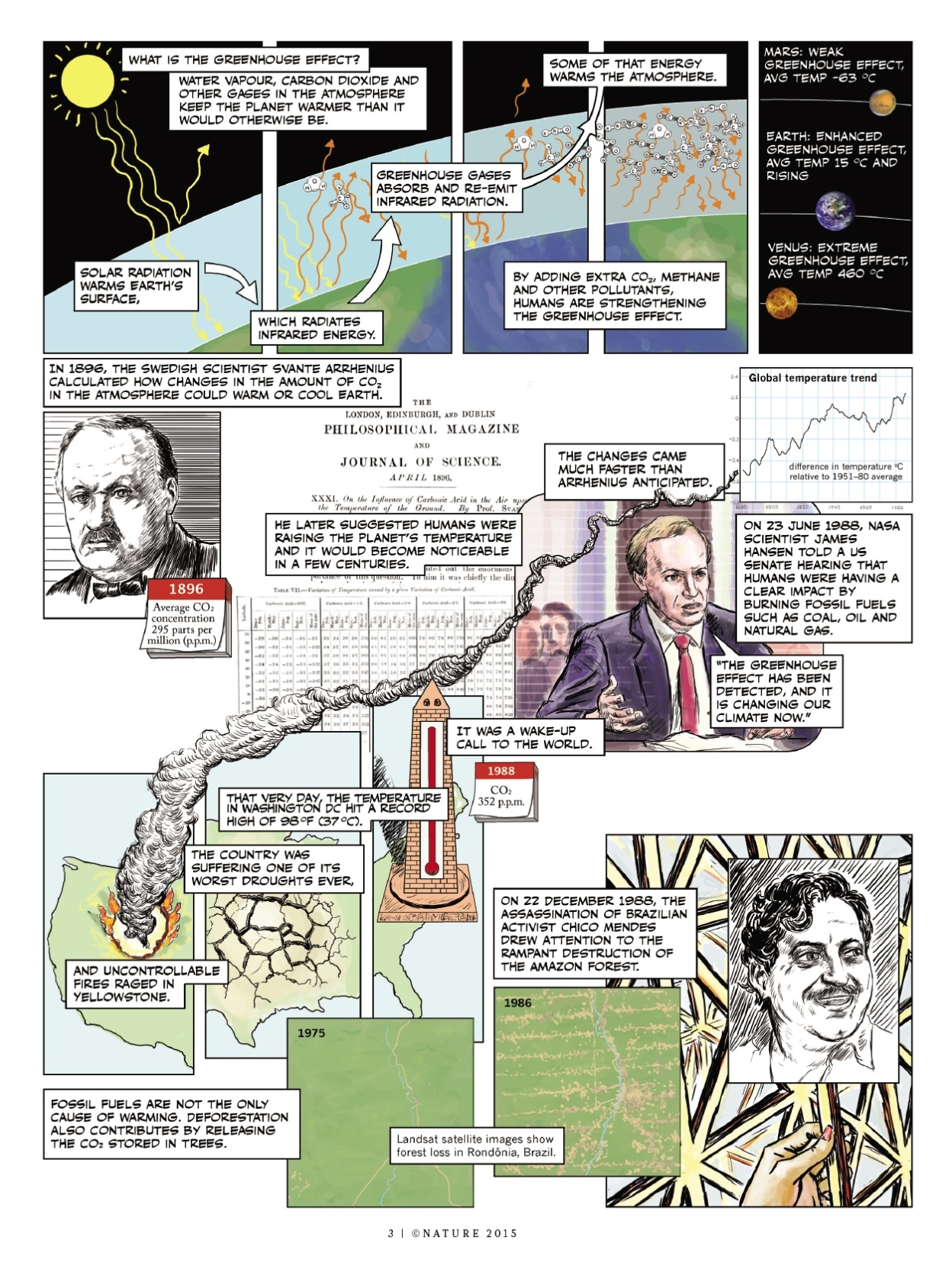 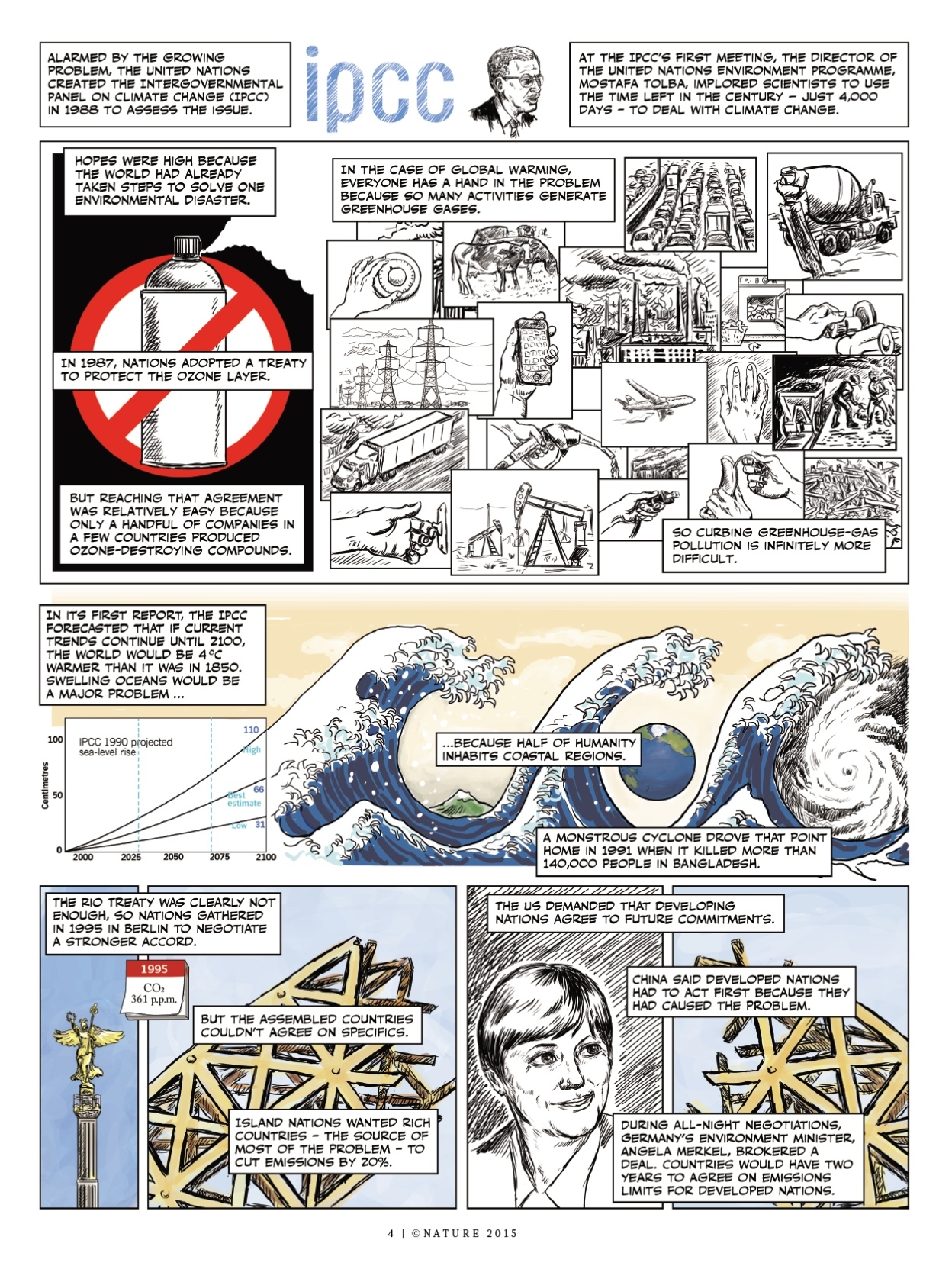 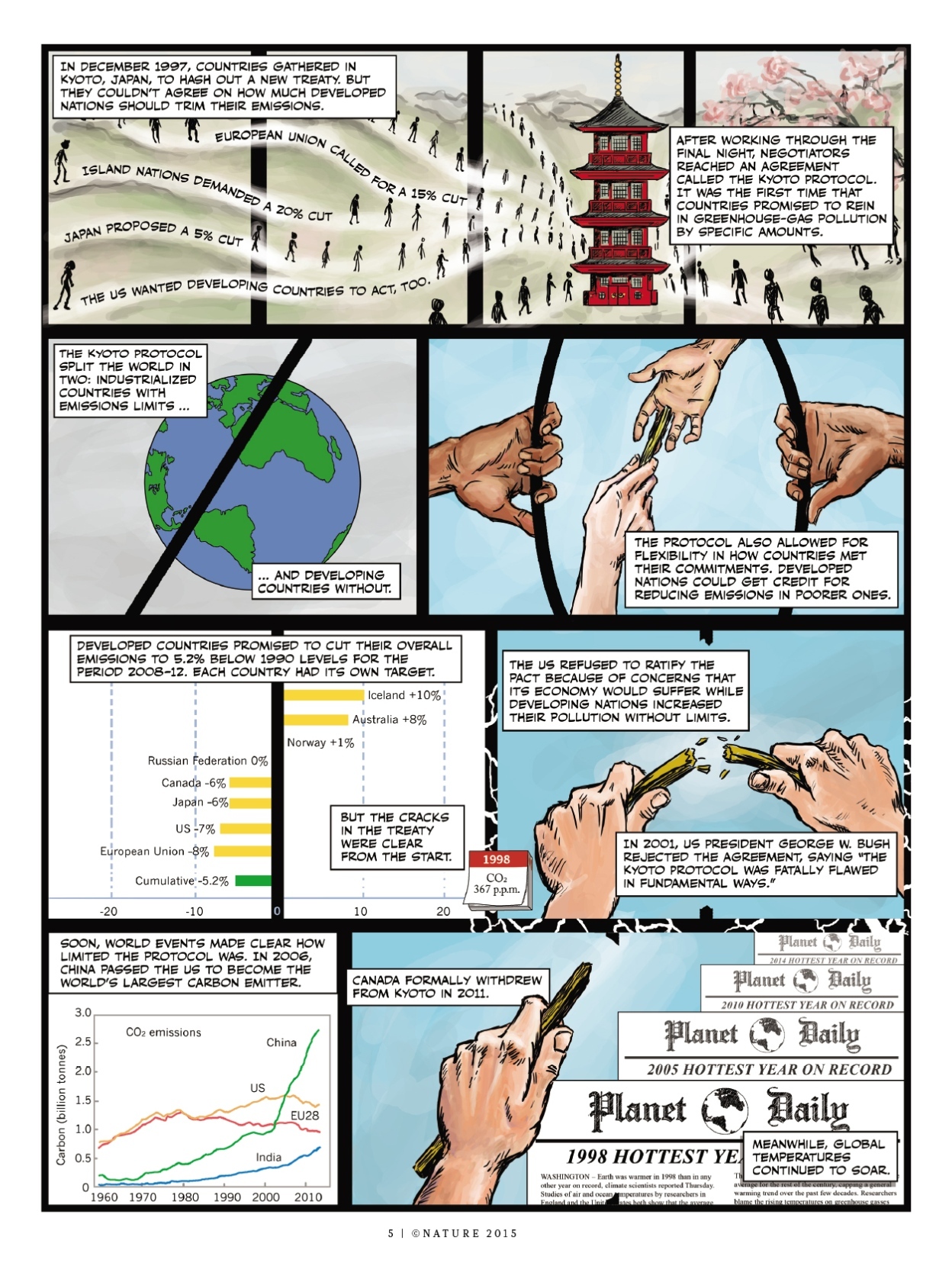 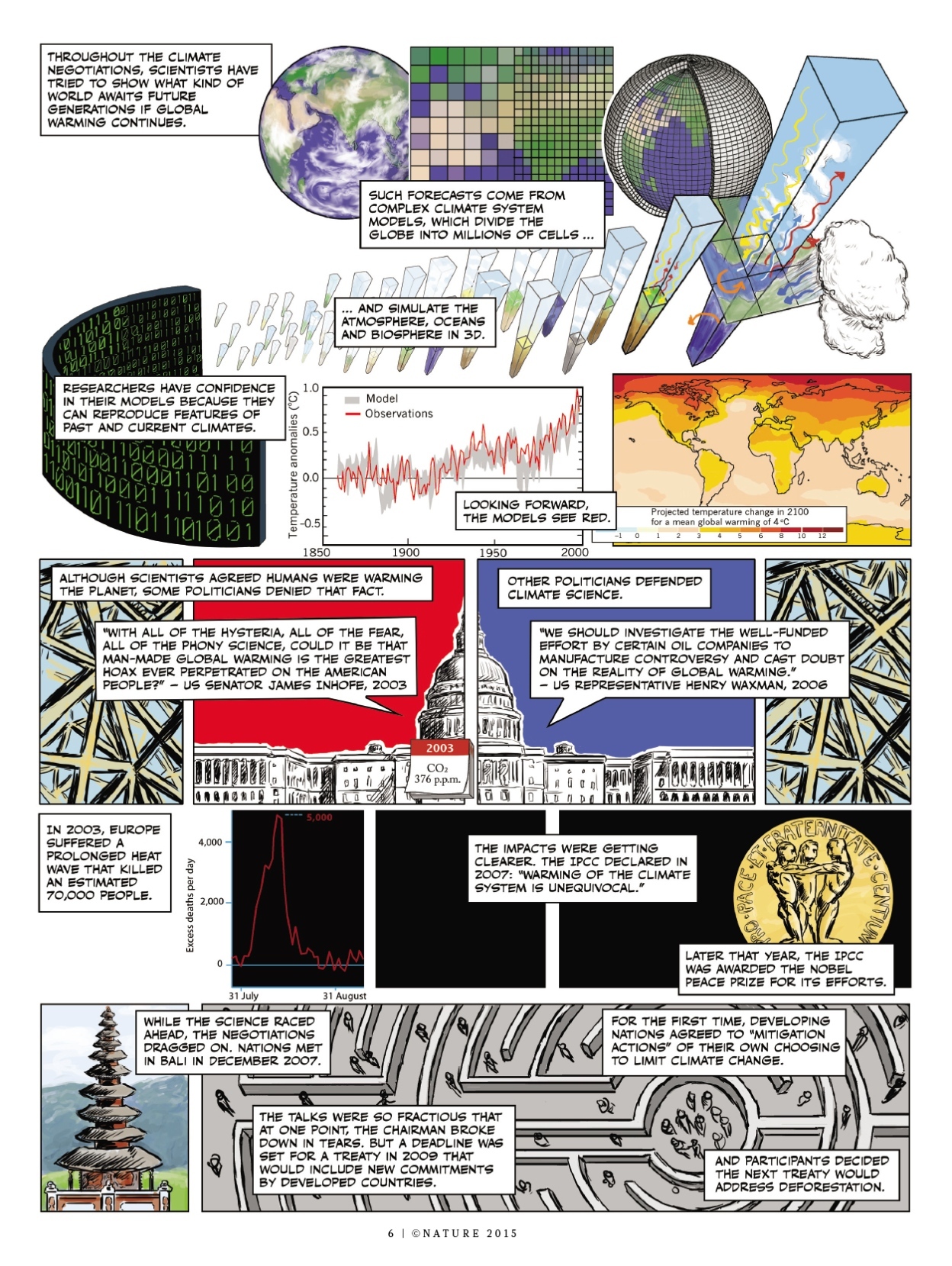 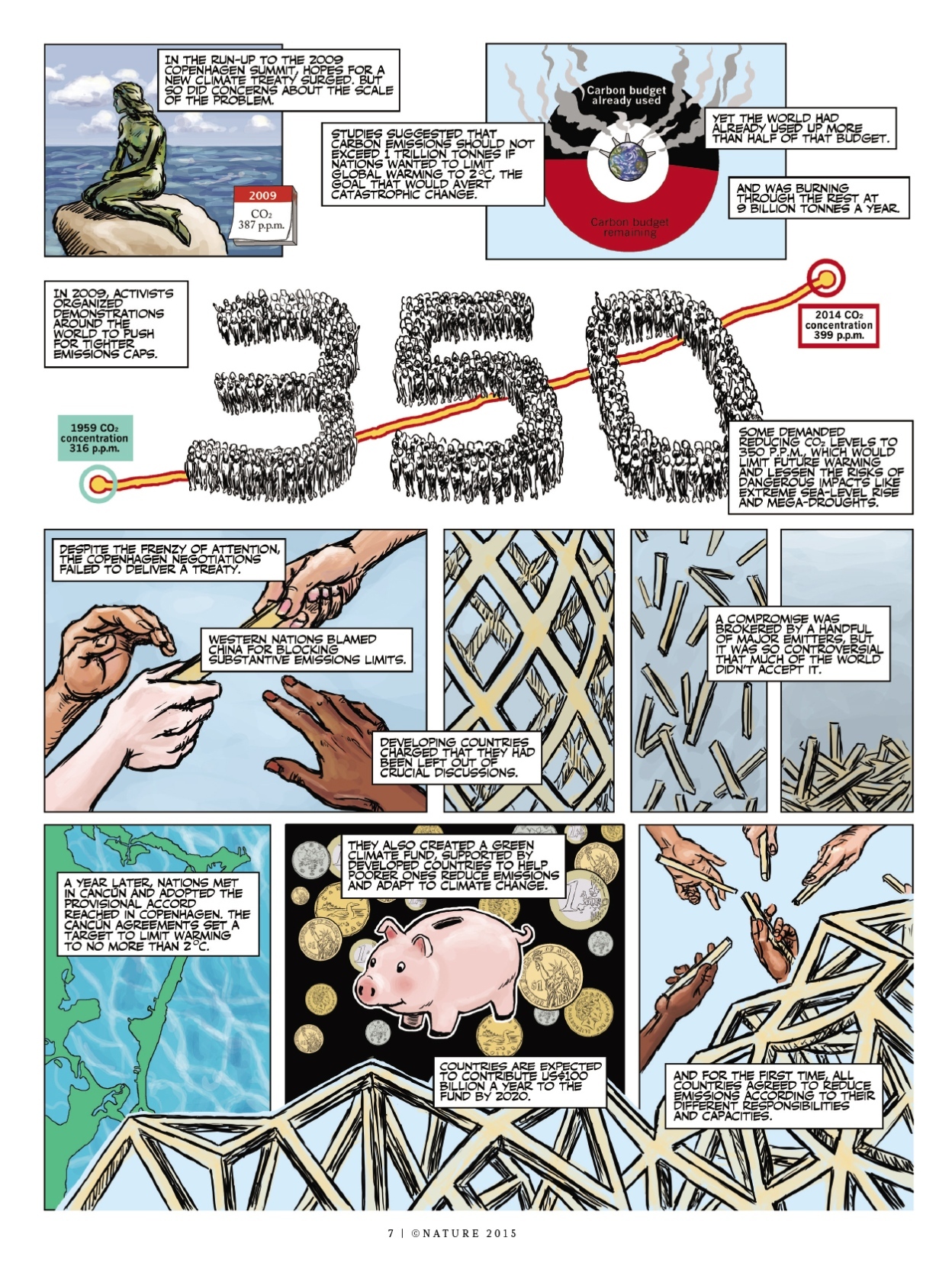 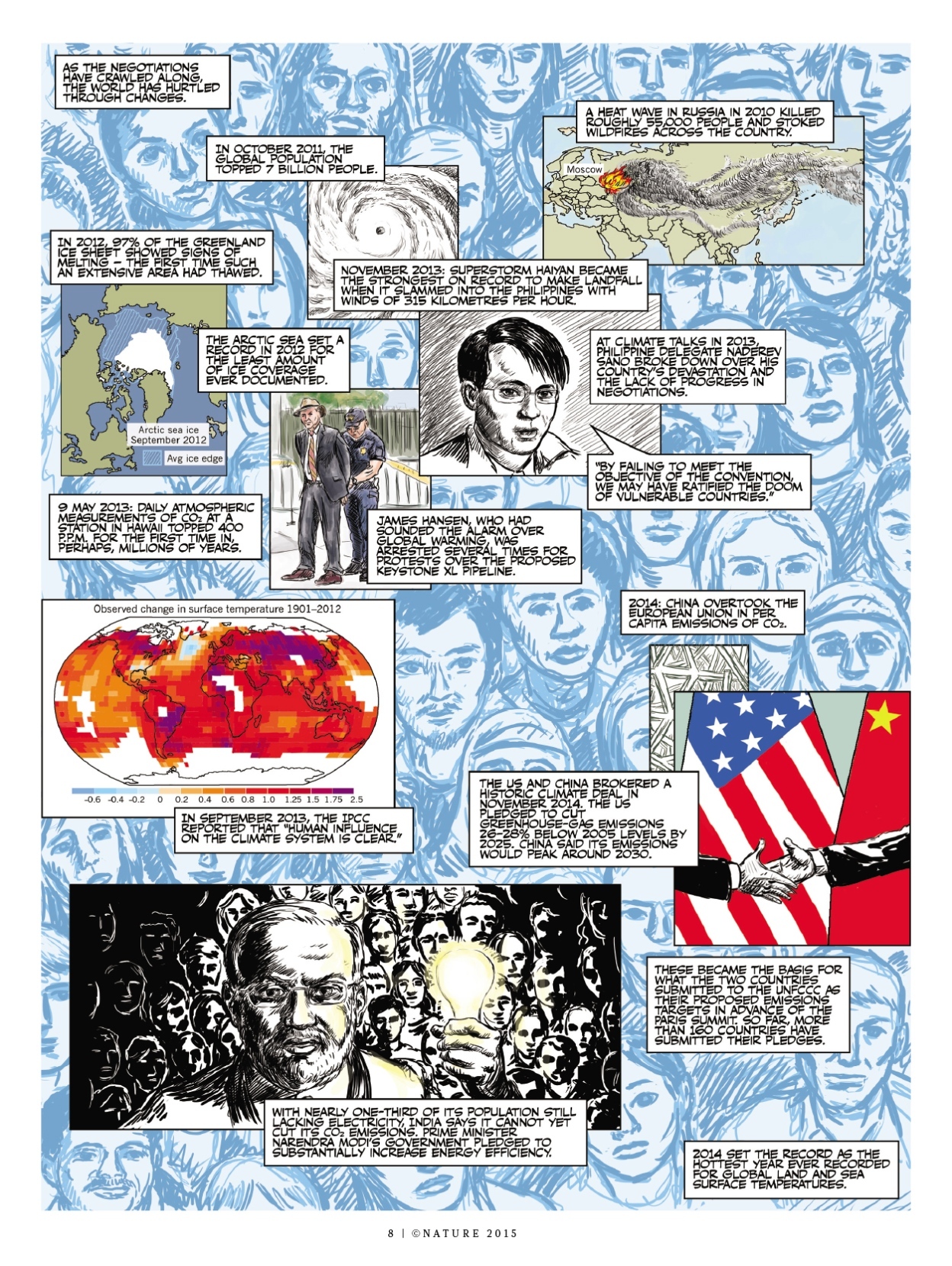 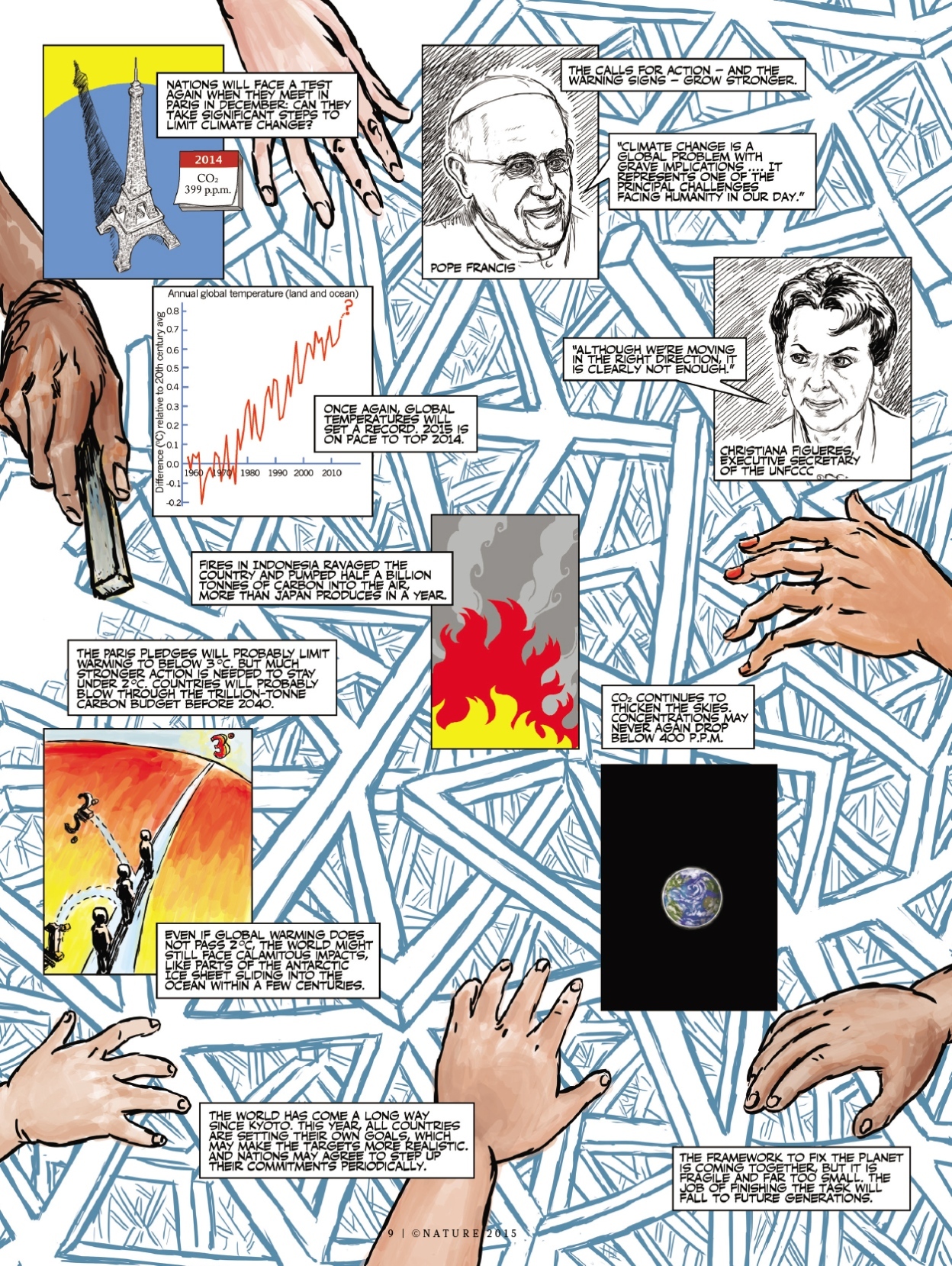