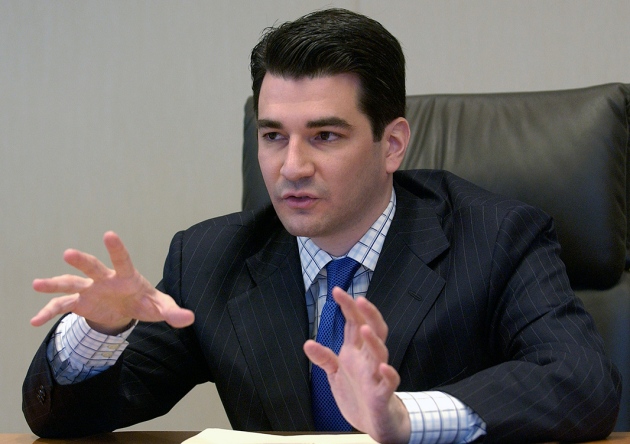 Scott Gottlieb has been nominated to head the FDA.

Today, many people at the American College of Cardiology conference in Washington DC crammed into a room to hear one of the most widely anticipated talks of the year. The data, as expected, showed that a potential blockbuster cholesterol medicine lowers the risk of heart attack and stroke — more than a year after it was approved by US regulators.

The drug, called Repatha (evolocumab), inhibits a protein known as PCSK9 that helps to control cholesterol levels in the blood, and it reduces ‘bad’ low-density lipoprotein (LDL) cholesterol by 57% in clinical trials (D. J. Blom et al. N. Engl. J. Med. 370, 1809–1819; 2014). Yet cholesterol is merely an easily measurable proxy for the outcomes that patients actually care about — will this drug prevent disease and save lives?

An over-reliance on surrogate measures such as cholesterol levels has occasionally led medicine in the wrong direction, but their use in clinical trials is sometimes a practical necessity. Measuring cholesterol involves a simple lab-based test performed on blood samples collected over a few months; by contrast, to determine whether a drug staves off heart attack and stroke requires regular assessments of thousands of patients for several years. (The Repatha trial enrolled around 27,500 patients and began in 2013.)

Deciding to use a surrogate or not requires judgement that pits the need for a speedier and cheaper drug approval against the need for scientific rigour. US President Donald Trump’s nominee to head the US Food and Drug Administration (FDA), Scott Gottlieb, has made it clear that he thinks the agency should place greater value on speed. If the US Senate approves his appointment, in the future, more drug approvals might be made on the basis of surrogate endpoints.

This is not the only reason that many corners of the pharmaceutical industry breathed a sigh of relief on news of Gottlieb’s nomination last week. For months, rumours circulated that Trump would put forward someone who would advocate a dramatic shift at the FDA, favouring a system in which the agency approves drugs on the basis of safety without regard for whether they work. This, along with Trump’s proclivity towards proposing agency heads with little to no experience — and sometimes even an expressed desire to undercut the agency that they will lead — worried pharmaceutical executives and consumer advocates alike.

From that perspective, Gottlieb is a safe choice. He is a physician who worked at the FDA as a deputy commissioner under former president George W. Bush. He favours speedy drug approvals, but does not advocate dismantling the entire regulatory edifice. Similar to Trump, Gottlieb opposes the health-care reform enacted by former president Barack Obama, but he tends to back up his arguments with data — a refreshing approach in an atmosphere that is brimming with vague, ideological attacks.

Gottlieb may well prove to be an effective FDA commissioner. But in the midst of the relief over his nomination, it is important not to overlook a few other aspects of Gottlieb’s CV. He received more than US$400,000 from the pharmaceutical industry between August 2013 and December 2015, and has worked as a venture capitalist for a firm that has invested in dozens of biotechnology companies.

In his previous role at the FDA, Gottlieb removed himself from decisions that trod directly on his industry ties. In 2005, for example, he withdrew from discussions about the potential response to an outbreak of avian influenza in the United States, citing his past connection to companies that may be involved in the response.

He will probably take the same step as FDA chief. But it becomes more difficult to ensure that Gottlieb’s ties to industry will not influence his decisions on broader issues. Would he also have to excuse himself from making decisions about when to use surrogate endpoints instead of more complete clinical data? What about guidance on how far the pharmaceutical industry can go to advertise drugs for unapproved uses? The cases that come before Gottlieb may not involve the companies that he has had dealings with, but they could have a tremendous impact on the industry as a whole.

Gottlieb’s ties do not automatically mean that he will put pharma before patients, and there are benefits to an FDA chief who is familiar with all aspects of drug development. But Gottlieb’s potential conflicts also mean that his leadership would — and should —  be watched closely to ensure that he does not serve as a surrogate for industry interests.