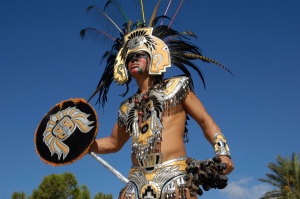 The Aztecs conquered much of Mexico in the 15th century.

The decline of one group of Mexico’s Otomí people is an anthropological cold case. In the fifteenth century, the population of the city state of Xaltocan all but vanished, replaced by the growing Aztec culture. But the ultimate fate of the Otomí in the region is known only as an outline pieced together from conflicting historical documents and archaeological evidence. A genetic study recording the biological comings-and-goings of the Otomí now deepens the mystery.

In the fifteenth century, what is now Mexico was made up of warring city states with separate cultural identities. In 1428, several of these city states joined together to form the Triple Alliance, which spread and became the Aztec empire. Xaltocan in central Mexico was among the city states that were assimilated. But the fine details of what happened there are unknown.

Documents from the sixteenth century hint that the city had been abandoned by the original Otomí inhabitants in 1395 following a previous military clash, and that it was repopulated by the Aztecs in 1435. Archaeological evidence, by contrast, indicates that at least some Otomí remained in the area after it was abandoned, and stayed until the Aztecs took over.

Jaime Mata-Míguez, an anthropologist at the University of Texas at Austin, decided to track the pattern of the overthrow using DNA sampling. His results are published in the American Journal of Physical Anthropology1.

Mata-Míguez and his colleagues sampled mitochondrial DNA from 25 bodies recovered from patios outside excavated Xaltocan houses. The remains dated from between 1240 and 1521, and so acted as markers of the population before and after the occupation. It turned out that the DNA in the pre-conquest samples did not match those of the post-conquest ones, indicating that a new biological influence came with cultural overthrow.

The team concedes that its sample is small and may not be entirely representative of the historical conquest. “We originally thought the question was simply a matter of whether the population was replaced or not,” says Mata-Míguez. “Now we have even more research questions, not just about the site, but about households in the site.”

He identifies three scenarios that fit the genetic data. One possibility is that the Aztecs might have entirely replaced the Otomí at Xaltocan. Mata-Míguez considers this unlikely, given the archaeological persistence of at least some Otomí after 1395.

Finally, there could have been a switch in how households were inherited. Mitochondrial DNA — the sort sampled in the study — is passed down by mothers, so it can record a change in the female aspect of families, but can't track continuity among male members. Historical documents suggest that in the fourteenth to sixteenth centuries, Mexican societies passed on property through both the maternal and the paternal lines, so it is possible that what was a maternally inheriting community before the conquest became a paternally inheriting one afterwards.

“Our results show that the Otomí inhabitants of the sampled houses were not maternally related to the Aztec-era inhabitants of those houses,” says Mata-Míguez, “but we need to study biparentally inherited genetic markers and other households at Xaltocan before we can say whether the original Otomí population was completely replaced or not.”

As yet, it isn’t clear which scenario might be true. Still, with further sampling, DNA studies can be useful for fleshing out hypotheses based on historical records and archaeological evidence, says Dennis O'Rourke, an anthropologist at the University of Utah in Salt Lake City. “There’s still work to be done,” he says. “I like the fact they’re using genetics as an independent way to investigate and augment hypotheses that archaeologists have been interested in for some time.”