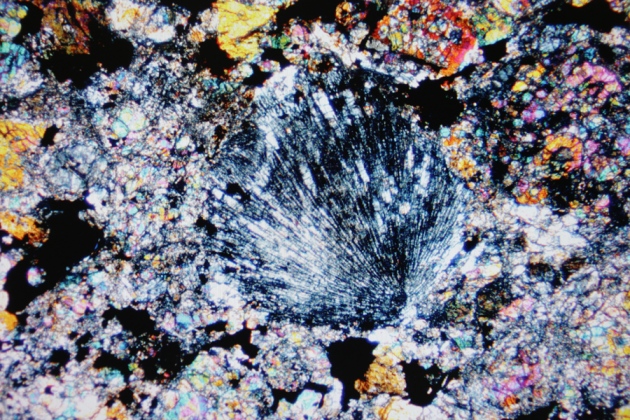 The city of Chelyabinsk was once a secret Soviet weapons centre, then a poor Siberian backwater. But a few minutes after sunrise on 15 February, the largest meteor blast in more than 100 years lifted the region from obscurity. Since then, scientists have been scrutinizing fragments of the meteorite and studying videos of its final moments to pin down its origin and how it got to Earth.

The picture so far is of a garden-variety envoy from the asteroid belt between Mars and Jupiter, the size of a house and weighing 9,000 tonnes, that had a hard life even before its chance encounter with Earth. “It was a rather fragile body,” says Pavel Spurný, a meteor expert at the Ondřejov Observatory near Prague, a member of one of the teams doing the analysis.

His team examined seven videos of the fireball — the largest since the 1908 Tunguska meteorite, which also hit Siberia. The analysis reveals that the meteor first became visible around 92 kilometres above ground. Just over 11 seconds later, at a height of nearly 32 kilometres, it exploded spectacularly under the stress of heating and air drag, damaging thousands of homes and injuring more than 1,000 people in and around Chelyabinsk.

Before its cataclysmic encounter with Earth’s atmosphere, the object — dubbed Chebarkul after the small town and lake where some of the largest fragments have been found — seems to have been on an elliptical orbit around the Sun. Stretched between Venus and the centre of the asteroid belt between Mars and Jupiter, the Earth-crossing orbit was just slightly inclined relative to the plane of Earth’s orbit around the Sun, the team says in its report to the International Astronomical Union’s Central Bureau for Astronomical Telegrams in Cambridge, Massachusetts. (NASA scientists have ruled out any relation between the Chebarkul meteor and the asteroid 2012 DA14, which skimmed by Earth just hours later.)

A team assigned by the Russian Academy of Sciences to comb the snowy countryside has collected more than 50 fragments measuring 0.5–1 centimetre in diameter. A second group, led by Viktor Grokhovsky of the Urals Federal University in Ekaterinburg, has found another 50 or so pieces, one of which weighs almost 2 kilograms. The samples are being sent to the Russian Academy of Science’s Vernadsky Institute of Geochemistry and Analytical Chemistry in Moscow, which has also asked locals for photographs of any fragments they have found.

Inside some of the rocky shards are glassy veins, perhaps created during the impact that broke the object away from its mother asteroid many million years ago. Preliminary geochemical analysis suggests that Chebarkul was a stony meteor with low iron content — a chondrite — made of material that had been partially melted and recrystallized from the dust and gas cloud of the early solar nebula.

A sturdier body might have reached the surface without exploding, but this one probably took a beating after its genesis, having collided with other celestial bodies, says Timothy Spahr, director of the Smithsonian Astrophysical Observatory’s Minor Planet Center in Cambridge, Massachusetts. “This could have caused cracks which then resulted in such a powerful blast,” says Erik Galimov, director of the Vernadsky Institute.

The search is on for bigger pieces that hold more clues to the meteor’s origin and history. Spurný and his colleagues have calculated the final part of the meteor’s 254-kilometre flight through the atmosphere and where the largest fragments probably landed (see ‘Impact zone’).

The fireball zipped through the upper atmosphere at an initial velocity of 17.5 kilometres per second, the team thinks. In the denser air near the ground, the fragments would have slowed to about 180 metres per second, cooled and vanished, says Jiri Borovicka, a co-author of the report.

But calculations based on the fireball’s observed path and on wind profiles suggest that chunks weighing tens of kilograms probably landed close to the village of Travniki, and one weighing around 1 kilogram may have hit northwest of the village of Shchapino, Borovicka says. Thousands of smaller pieces may be hiding in a 25-kilometre-long swathe south of the final point of the trajectory.

The largest single fragment, a piece of rock that could weigh up to half a tonne, may have landed smack in Lake Chebarkul. A 6-metre-wide hole found in the lake’s frozen surface the morning after the impact “almost certainly” marks the spot where the whopper came down, says Borovicka.

Russian military divers are busy searching the shallow lake. But Spahr, who discussed the impact with other scientists at a meeting of the United Nations Committee on the Peaceful Uses of Outer Space in Vienna last month, isn’t so sure. “From what we’ve seen on pictures, the ‘crater’ just doesn’t look right,” he says. “It looks more like a hole someone has cut in the lake with an axe.”