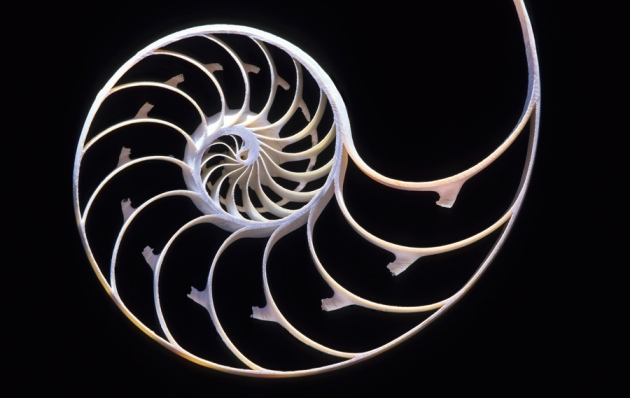 The shape of this chambered nautilus is one of many biological features that D’Arcy Thompson used maths to explain.

This year marks the centenary of what seems now to be an extraordinary event in publishing: the time when a UK local newspaper reviewed a dense, nearly 800-page treatise on mathematical biology that sought to place physical constraints on the processes of Darwinism.

And what’s more, the Dundee Advertiser loved the book and recommended it to readers. When the author, it noted, wrote of maths, “he never fails to translate his mathematics into English; and he is one of the relatively few men of science who can write in flawless English and who never grudge the effort to make every sentence balanced and good.”

The Dundee Advertiser is still going, although it has changed identity: a decade after the review was published, it merged with The Courier, and that is how most people refer to it today. The book is still going, too. If anything, its title — alongside its balanced and good sentences — has become more iconic and recognized as the years have ticked by.

The book is On Growth and Form by D’Arcy Thompson. This week, Nature offers its own appreciation, with a series of articles in print and online that celebrate the book’s impact, ideas and lasting legacy.

Still in print, On Growth and Form was more than a decade in the planning. Thompson would regularly tell colleagues and students — he taught at what is now the University of Dundee, hence the local media interest — about his big idea before he wrote it all down. In part, he was reacting against one of the biggest ideas in scientific history. Thompson used his book to argue that Charles Darwin’s natural selection was not the only major influence on the origin and development of species and their unique forms: “In general no organic forms exist save such as are in conformity with physical and mathematical laws.”

Biological response to physical forces remains a live topic for research. In a research paper, for example, researchers report how physical stresses generated at defects in the structures of epithelial cell layers cause excess cells to be extruded.

In a separate online publication (K. Kawaguchi et al. Nature http://dx.doi.org/10.1038/nature22321; 2017), other scientists show that topological defects have a role in cell dynamics, as a result of the balance of forces. In high-density cultures of neural progenitor cells, the direction in which cells travel around defects affects whether cells become more densely packed (leading to pile-ups) or spread out (leading to a cellular fast-lane where travel speeds up).

A Technology Feature investigates in depth the innovative methods developed to detect and measure forces generated by cells and proteins. Such techniques help researchers to understand how force is translated into biological function.

Thompson’s influence also flourishes in other active areas of interdisciplinary research. A research paper offers a mathematical explanation for the colour changes that appear in the scales of ocellated lizards (Timon lepidus) during development (also featured on this week’s cover). It suggests that the patterns are generated by a system called a hexagonal cellular automaton, and that such a discrete system can emerge from the continuous reaction-diffusion framework developed by mathematician Alan Turing to explain the distinctive patterning on animals, such as spots and stripes. (Some of the research findings are explored in detail in the News and Views section.) To complete the link to Thompson, Turing cited On Growth and Form in his original work on reaction-diffusion theory in living systems.

Finally, we have also prepared an online collection of research and comment from Nature and the Nature research journals in support of the centenary, some of which we have made freely available to view for one month.

Nature is far from the only organization to recognize the centenary of Thompson’s book. A full programme of events will run this year around the world, and at the D’Arcy Thompson Zoology Museum in Dundee, skulls and other specimens are being scanned to create digital 3D models. Late last month, this work was featured in The Courier. One hundred years on, Thompson’s story has some way to run yet.