Chinese researchers have revealed that the amount of water entering the Yangtze River near its source on the Tibetan plateau has fallen by 15% over the past four decades, despite a 15% increase in glacial melt and increased rainfall over the same period.

Wang Genxu, an ecologist at the Chengdu-based Institute of Mountain Hazards and Environment, part of the Chinese Academy of Sciences (CAS), says that the findings came as a surprise. “It is in contrast to results from the Arctic where global warming has generally caused increased river discharge,” he says. 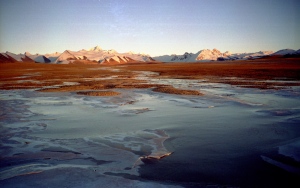 The source of the Yangtze River, on the Tibetan plateau, has been taking in less water despite melting glaciers and increased precipitation.

Wang and his collaborators at the Cold and Arid Regions Environment and Engineering Research Institute (CAREERI) in Lanzhou, also part of the CAS, have just completed a five-year project to document changes in glaciers, snow and permafrost and to assess their impact on water resources in western China.

Ding Yongjiang, CAREERI’s deputy director, notes that by contrast, many other river systems in western China have seen more water input as glacial retreat and rainfall have increased with a warming climate. The runoff into the Tarim River headwaters, for instance, has increased by 13% since 1961, mainly as a result of increased glacial melt, which has risen by 26%. “But the Yangtze headwaters are an exception,” says Ding.

So why is the Yangtze different?

The decrease in runoff into the Yangtze is accompanied by widespread changes in permafrost, says Wang. Across the Tibetan plateau, 10% of the permafrost has degraded in the past decade. The area of alpine wetland and high-vegetation-cover alpine meadow has decreased by 37% and 16%, respectively.

This prompted Wang and his colleagues to assess whether these changes had affected the amount of water running off the land. At a research station near Fenghuoshan Mountain in the northeast of the Tibetan plateau, they studied how the runoff from permafrost into the Zuomaokong River, a Yangtze tributary, is affected by air and soil temperatures, the depth to which permafrost has thawed and the levels of vegetation cover.

The researchers found that the depth of the 'active' ground layer — the part that freezes and thaws every year — is crucial for water passage. Runoff increased if the thawing layer was less than 60 centimetres deep, but decreased if the thaw went deeper. The reasons are unclear but the researchers suspect that when more of the permafrost thaws, the thickened active layer may act like a sponge, soaking up water that would otherwise have run off into the river. Alternatively, more water may leak deep into the ground, also reducing surface discharge.

The thickness of the active layer is dictated both by air temperature and vegetation cover, especially during thawing seasons. The researchers found that nearly twice as much heat gets into severely degraded permafrost alpine meadow compared with healthy meadows. “So the soil is easier to thaw and more difficult to freeze, thereby deepening the active layer,” says Wang.

Wetland degradation may be even a bigger killer of headwater discharge, says Wang. Runoff from moderately degraded wetland was up to 40% less than in healthy wetland.

Wang stresses that it is still early days for this research into what is a complicated issue, but says that “the hydrology of the Tibetan plateau seems to be responding to a warming climate differently from the Arctic”. In central Alaska, for instance, permafrost degradation has resulted in the expansion of wetlands, whereas on the Tibetan plateau, it has caused the land to become drier and more prone to desertification.

Shemin Ge, a hydrogeologist at the University of Colorado in Boulder, says that the work “highlights the complexity of permafrost hydrology and the importance of permafrost as a headwater source”.

Until recently, the role of permafrost in water resources was largely neglected, with glaciers hogging the spotlight. “Glaciers are spectacular and get a lot of attention, whereas permafrost is humble and less visible,” says Ge.

But permafrost constitutes up to a quarter of Earth’s land surface. “It could be just as important [as glaciers] in terms of water resources, especially in places like the Tibetan plateau where you have a lot of it.”

A better understanding of the various components of runoff processes will help to develop permafrost hydrological models, says Wang. Such models could then be combined with other parts of the water cycle, such as atmospheric circulation, to predict changes in water resources.

“Being able to make accurate projections is crucial for informing polices and mitigation measures,” says Wang.