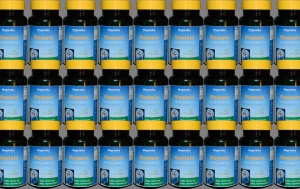 Magnesium supplements are touted as a way to improve memory and cognitive ability.

More than a decade of research hinting that magnesium supplements might boost your brain power is finally being put to the test in a small clinical trial.

The research, led by biopharmaceutical company Magceutics of Hayward, California, began testing the ability of its product Magtein to boost magnesium ion (Mg2+) levels in the brain earlier this month. The trial will track whether the ions can decrease anxiety and improve sleep quality, as well as following changes in the memory and cognitive ability of participants. But critics caution that the trial in just 50 people is too small to draw definitive conclusions.

Neuroscientist Guosong Liu of Tsinghua University in Beijing, who founded Magceutics, plans eventually to test whether Magtein can be used to treat a wider range of conditions, including attention deficit hyperactivity disorder (ADHD) and Alzheimer’s disease. But Liu knows that it will be difficult to convince other scientists that something as simple as a magnesium supplement can have such profound effects. It is almost “too good to be true”, he says.

Many scientists contacted by Nature agreed with that sentiment. One clinical researcher cautioned against “over-excitement about a magic drug for a major disorder”. And others wonder whether the study will even be able to prove anything conclusively. “I am very sceptical that the proposed trial will provide the answer to the question being tested,” says Stephen Ferguson, a biochemist at the University of Western Ontario in London, Ontario.

It is a crucial moment for Liu, who so far has mostly been testing his product in rats — and in himself. In 1999 he was part of a team that showed, in a well-known ‘smart mouse’ study, that memory in mice could be improved by overexpressing the NMDA receptor 2B (NR2B) in the brain, thereby strengthening synaptic connections1. In 2004, Liu's team showed that magnesium had a key role in these synaptic changes2. In 2010, he showed that in rats, pumping up levels of magnesium in the brain helped to improve long- and short-term memory3.

Other researchers have found that high doses of magnesium improved memory function in old rats4. And research in humans has shown that oral magnesium supplements in aged patients increases the duration of deep sleep, and decreases levels of the stress hormone cortisol5.

But it has been difficult to build on these studies, because the pharmaceutical industry is unenthusiastic about funding research into an ion that is freely available and thus unpatentable, says Harald Murck, a neuroscientist at the Psychiatric Clinic of the Philipps University of Marburg, Germany.

When Murck was based at the Max Planck Institute of Psychiatry in Munich, Germany, he carried out research in humans that suggested high levels of intravenous magnesium could have a beneficial effect on cognitive function6. “The challenge here is to find a compound which gets the magnesium in the brain to have these physiological effects,” says Murck.

The Magtein compound was designed to solve the problem of delivering the ion to the brain. The product contains magnesium threonate, in which the metal ion is paired with a low-molecular-weight metabolite of vitamin C that is already present in the brain. Tests have shown that the compound boosts levels of magnesium in rats’ brains by 15% after 24 days3.

Liu adds that he and some friends have been taking Magtein and have found that it increases magnesium levels in their bodies by 50%. Despite the lack of clinical-trial evidence, roughly 100,000 people in the United States are already taking the compound as a supplement that is sold by several different companies, all supplied by Magceutics.

In his double-blind study, Liu will give the compound to 25 people with “greater than normal anxiety”, and a placebo to another 25 with the same condition. But Ferguson cautions that the trial is “far too small to provide any statistical power for analysis”, and that several thousand patients would need to be studied to provide convincing evidence.

Liu agrees that future trials will need to be larger, but hopes that positive results in his trial will be enough to justify expanding the research. Based on promising results from animal studies and tests in three patients, he is planning a trial to test Magtein’s effects on Alzheimer’s disease by the end of the year.

Psychiatry researcher Craig Surman at Harvard Medical School in Boston, Massachusetts, is planning a collaboration with Liu to study Magtein’s effect on ADHD. “We have medications that treat ADHD and some aspects of cognitive function, but there are some parts of brain function that we don't have evidence-based interventions for,” says Surman. “If it works with low risk, it opens up a whole new mode of supporting people with cognitive challenges.”