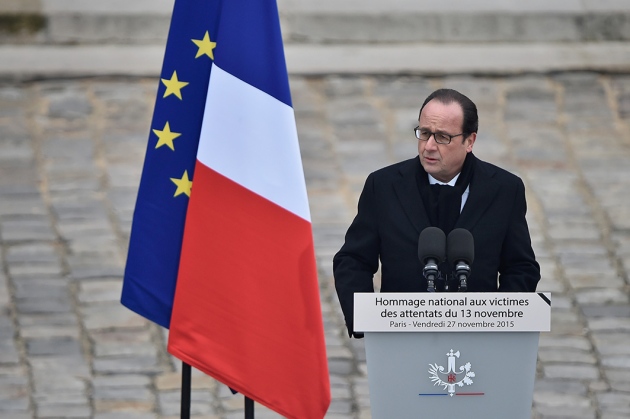 France’s President François Hollande attends a national tribute to the victims of the Paris terrorist attacks.

In the wake of the terrorist attacks in Paris on 13 November that left 130 dead and more than 350 wounded, Alain Fuchs, president of the French National Centre for Scientific Research (CNRS), announced a fresh call for proposals for research on terrorism. Acknowledging that any effort with no immediate effect may seem “derisory”, Fuchs said that science can help to open up avenues of analysis.

The Islamist terror group ISIS also carried out deadly attacks this year in Tunisia, Lebanon, Bangladesh and other countries, and downed a Russian airliner in the Sinai Peninsula. But as thousands of Europeans have left to join Islamist groups in conflict zones, and are at risk of returning home trained to carry out further attacks, the continent is on edge.

Terrorism researchers are trying to understand how young people in Europe become radicalized, by looking for clues in the life histories of those who have committed or planned terrorist acts in recent years, left the continent to join ISIS, or are suspected of wanting to become jihadists. A mixture of sociologists, political scientists, anthropologists and psychologists, such researchers are drawing on information generated by police, judicial inquiries and the media, and, in some cases, on interviews. They also study factors at play in prisons and socially-deprived areas. Some of their insights are summarized here.

Religion is not the trigger

The rise of jihad in Europe has led to an assumption that there is a radicalization of Muslims more generally across the continent. Yet research suggests that most extremists are either people who returned suddenly to Islam or converts with no Islamic background, says Olivier Roy, who specializes in political Islam and the Middle East at Italy’s European University Institute near Florence — and as many as one in four French jihadists is a convert. Roy summarized the latest research at a conference organized in Mainz on 18–19 November by the German Federal Criminal Police Office.

Violent extremism emerges first, with a religious justification tagged on after, adds Rik Coolsaet, head of political science at Ghent University in Belgium, who studies jihadis and foreign policy. He notes that two young British men who were jailed last year on terrorism offences after fighting in Syria had earlier ordered online the books Islam for Dummies and The Koran for Dummies.

Resentment is the common ground

It is difficult to make generalizations about how people become radicalized in Europe. At the Mainz conference, Roy said that many extremists come from broken families or deprived areas, lack education and are unemployed. A smaller number are well educated, have held jobs and have middle-class lifestyles. Some are in stable relationships and have young children. The characteristics that extremists seem to share are resentment directed at society and a narcissistic need for recognition that leaves them open to a narrative of violent glory, said Roy.

Social factors can contribute to such frustrations, according to Farhad Khosrokhavar, a CNRS researcher who works at the School for Advanced Studies in Social Sciences in Paris. Almost all European extremists and terrorists are second- and third-generation immigrants, whom Khosrokhavar says are often “stigmatized, rejected and treated as second-class citizens”. However, since about 2013, the profile of those leaving to fight in Syria has included a much larger proportion of middle-class youth than in previous generations, he says.

The link between terrorism and prison was highlighted this year. The three terrorists involved in the January attack in Paris on the satirical publication Charlie Hebdo and a kosher supermarket, as well as some of the 13 November attackers, had all done time.

Many French terrorists have a history of petty crime that landed them in prison. Stays there often proved seminal experiences on their path to radicalization, says Khosrokhavar, who spent several years interviewing some 160 staff and inmates at 4 large French prisons, including 15 inmates sentenced for terrorism offences. He says that prisoners often come under the influence of — and form lasting bonds with — radical Islamists and terrorist networks.

Most of those who get involved in jihadi terrorism in Europe are “misfits and drifters” — people who joined militant networks during life crises or through friends and relatives on the inside, says Petter Nesser, a terrorism researcher at the Norwegian Defence Research Establishment in Kjeller.

But he says that the key actors in terrorist activity are a much smaller number of “entrepreneurs”. These seasoned, ideologically driven activists are part of transnational terrorist webs linked both to extremist groups throughout Europe and to armed groups in conflict zones. They are the ones who bring structure and organization to the disaffected majority, through recruitment and indoctrination.

Several of the terrorists involved in the latest Paris attacks, and the perpetrators of previous attacks in Europe, had lived in the Molenbeek district of Brussels, which has a large Muslim community, mostly of Moroccan descent. This has led some politicians and media outlets to label it Europe’s terrorism capital — and to blame factors such as social deprivation or an apparent lack of integration of Muslims.

“This is misleading,” says Nesser. Jihadi hot spots have emerged across Europe in environments ranging from poor suburbs, to universities and schools, to prisons. The key ingredient in the spread of jihadism in any location is a critical mass of jihadist entrepreneurs, he says.

A focus on Molenbeek obscures the fact that European jihadism is transnational, Nesser says, and that its main drivers are armed conflicts and militant groups involved in those conflicts. He adds: “It is also unfair and stigmatizing towards the inhabitants of this Belgian suburb.”