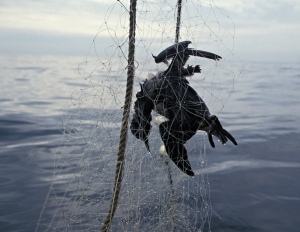 Hundreds of thousands of seabirds are thought to perish in gillnets every year.

Evidence for the horrific impact of fishing gear on seabirds has been revealed by the closure of Canadian fisheries after fish stocks collapsed in the early 1990s.

Biologists have long worried that diving birds can become entangled in gillnets, which are anchored in fixed positions at sea. Designed to snare fish by the gills, these nets can also trap and drown birds.

This has been graphically demonstrated by finds of birds enmeshed in nets, but a quantitative assessment of the effects of such ‘by-catch’ on seabird populations has been hard to come by.

Now, that hard evidence has come from a careful study1 of seabird populations off the eastern coast of Canada, where cod and salmon fisheries were closed and gillnets removed in 1992. This work comes just weeks after another report2 estimated that hundreds of thousands of birds die each year in gillnets around the world.

Ecologists Paul Regular and William Montevecchi of the Memorial University of Newfoundland in St John’s and their colleagues examined data on various marine birds at five major Canadian seabird reserves in Newfoundland and Labrador between 1968 and 2012. They then compared bird population trends with data on gillnet use between 1987 and 2009.

The team found that populations of diving birds such as murres and gannets, which are vulnerable to entanglement in nets, increased after the ban. But in the same period, the numbers of gulls and other surface-feeding scavengers that benefit from unwanted fish thrown away by fisheries decreased, the researchers report in Biology Letters1. Although the gull populations declined, these species are not at risk of extinction and it is likely their numbers are returning to more natural levels with the reduced influence of human activity.

“Based on previous estimates of tens of thousands of murres killed each year in regional gillnet fishes, clearly significant numbers of breeding murres have survived that wouldn’t have otherwise,” say Regular and Montevecchi. The data ”support the widely held but rarely documented contention that by-catch mortality affects seabird populations”.

The authors say that fishing pressure off Canada's Atlantic coast is much lower now than it was before the closure of the fisheries, but bird deaths from by-catch are still an issue as some fisheries are still open. They suggest a move to alternative methods of capturing fish, such as pot traps that allow fish to swim in but not out, and which pose little threat to diving birds. They also recommend the creation of reserves called marine protected areas, in which Canada is currently “very sorely lacking”, they say.

Cleo Small, who works on seabird issues for the Royal Society for the Protection of Birds in Sandy, UK, notes that data on by-catch in gillnet fisheries are scarce, so Regular and Montevecchi's paper will be “a very important reference for future work”.

Earlier this month, Small and her colleagues reported a global review of seabirds caught in gillnets in Biological Conservation2. Looking at all the published estimates they could find, they concluded that 400,000 birds were killed in this manner every year.

“I was taken aback by the scale of the numbers once we added them up,” says Small. “I hope that this Canadian review and the global review will help stimulate research and policy action that will help find some solutions.”