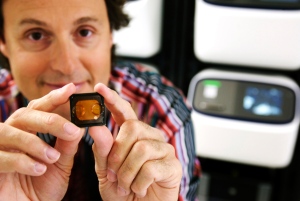 A semiconductor sequencing chip held by Jonathan Rothberg, founder of sequencing company Ion Torrent in Guilford, Connecticut — one of only two entrants for this year’s Archon Genomics X Prize.

It was never meant to be a piece of cake — but neither was it meant to be a flop. Yet as the 31 May registration deadline looms for the Archon Genomics X Prize — a challenge to sequence 100 complete human genomes in 30 days at unparallelled accuracy and low cost — only two teams have entered.

The lacklustre showing is a testament to both the difficulty of the challenge and the maturation of the DNA-sequencing industry in the seven years since the prize was first conceived, genetics and innovation researchers say.

“The business has become bigger than the prize,” says Jonathan Rothberg, founder of the sequencing company Ion Torrent in Guilford, Connecticut, which was acquired in 2010 by Life Technologies in Carlsbad, California — which was, in turn, recently snapped up for US$13.6 billion by Thermo Fisher in Waltham, Massachusetts. Ion Torrent plans to compete, but other firms have apparently decided that they have little to gain.

Yet the goal of the prize — to drive down the cost of sequencing while improving its quality — matters just as much as it did in October 2006, when the X Prize Foundation, based in  Playa Vista, California, first announced the challenge, experts say. Although sequencing costs have fallen drastically (see ‘Plummeting costs’), that decline has plateaued recently. 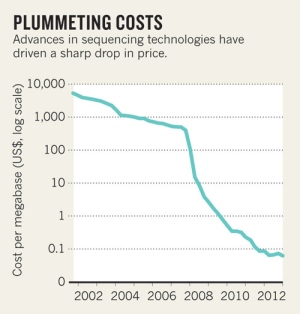 The original rules called for teams to sequence 100 genomes in 10 days for less than $10,000 per genome. After none of the original eight competitors could meet the 10-day timeframe, the foundation spent two years revamping the challenge. The reconceived prize, launched in October 2011, extended the time to 30 days, tightened the cost to $1,000 per genome and specified that 100 genomes from centenarians, who may harbour life-extending genetic variants, must be sequenced (see L. Kedes and G. Campany Nature Genet. 43, 1055–1058; 2011).

The new challenge aims at what the X Prize Foundation calls a “medical grade genome” — a sequence of all the nuclear DNA to 98% completeness and high accuracy, allowing only one error per million bases. To win the $10-million prize pot, teams must also find DNA insertions, deletions and rearrangements within genes and determine which parent each one came from.

Hitting all these goals in one go is hugely challenging. Market leader Illumina in San Diego, California, boasts a rate of false-positives (inaccurately flagging a DNA base as a variant from normal) of 0.25% and a rate of false negatives (missing a real variant) of 7.4%, well above the error rates allowed by the X-prize requirements. It is hard to do better because current technologies sequence the genome in short stretches that then have to be reassembled, introducing errors. New ways to sequence longer segments in one go are commercially available (see Nature 494, 290–291; 2013), but they are slow and expensive. “To date, none of them would win the X prize at this scale,” says quantitative biologist Michael Schatz at Cold Spring Harbor Laboratory in New York.

Still, why have so few teams even deigned to try? Meeting the challenge would cost much more than the prize purse, but that has also been true of past contests that attracted dozens of entrants, such as the Ansari X Prize, which required teams to send passengers into space, and the US government’s Defense Advanced Research Projects Agency Grand Challenges, one of which catalysed the development of successful self-driving cars.

Part of the answer is that a genomics prize, unlike a rocket launch, isn’t easy to explain to the public (see 'Other challenges'). As a result it does not have the same publicity value, says Luciano Kay, a researcher at the Center for Nanotechnology in Society at the University of California, Santa Barbara. A competition for a self-driving car that can go 10 kilometres is more attractive than manipulation of matter or genes at tiny scales to accomplish a very scientific or technical feat, Kay says.

The Critical Assessment of Genome Interpretation experiment has seen the number of entrants rise every year since it was first held in 2010 (see go.nature.com/dfclt1). And a US$1-million purse offered by the US Defense Threat Reduction Agency has spurred thousands of researchers to try to identify individual organisms from mixed pools of sequenced DNA.

Thousands of participants also competed in a bioinformatics challenge in April to find hidden sequences in DNA data sets (run by the journal Genome Biology and curated by Michael Schatz of Cold Spring Harbor Laboratory in New York and James Taylor of Emory University in Atlanta, Georgia). It was organized to commemorate the sixtieth anniversary of the original research papers describing the structure of DNA.

Now Grant Campany, senior director for the Archon Genomics X Prize, says that the X Prize Foundation itself is considering laying out another challenge aimed at genome interpretation.

And the goal of the genomics X prize — to sequence whole genomes to medical grade rapidly and cheaply — may not be a top commercial priority at present. The business of genomics is already booming on the basis of less complete sequences, and Rothberg points out that scientists can only interpret the small fraction of the genome that codes for proteins (the ‘exome’). It is unclear what would be gained from an accurate sequence of the rest.

Still, whoever wins the prize earns the right to boast, which explains why Ion Torrent decided to compete. It also explains why Illumina decided not to: failure would only dent its reputation, muses Timothy Harris, who develops applied-science tools at the Howard Hughes Medical Institute’s Janelia Farms campus in Ashburn, Virginia. The other entrant is a team led by George Church at the Wyss Institute at Harvard in Boston, Massachusetts.

Grant Campany, senior director of the genomics X prize, hopes that other teams will step up to compete before the contest gets under way in September. Even if they don’t, scientists predict that its goals will be achieved within the next few years, whether through the prize or not. “If you could deliver that kind of performance you would have the commercial advantage by a large margin over anyone else,” Harris says. “That commercial advantage is worth way more than the X prize.”