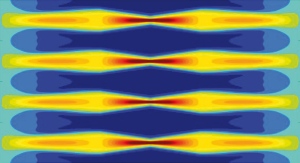 Light waves, shown evolving in time in this simulation, create a cloaking effect at the middle where the light intensity goes to zero.

If you’ve ever wanted to edit an event from your history, then help may soon be at hand. Electrical engineers have used lasers to create a cloak that can hide communications in a 'time hole', so that it seems as if they were never sent. The method, published today in Nature1, is the first that can cloak data streams sent at the rapid rates typically seen in telecommunications systems. It opens the door to ultra-secure transmission schemes, and may also provide a way to better shield information from noise corruption.

In 2010, Martin McCall, an optical physicist at Imperial College London, and his colleagues proposed2 that it may be possible to create temporal cloaks that carve out short windows in time during which operations can be carried out unnoticed. Their work built on the principles behind invisibility cloaks, which hide objects in space by channelling light rays around them. When viewed from a distance, the light appears to have travelled along a straight line, without having hit any intervening object.

Similarly, McCall and colleagues suggested that by pulling light waves apart in time, and then compressing them back together, it should be possible to create 'time pockets' in which to cloak events. In theory, this could enable “a whole new level of security” for data transmission along optical fibres, says Joseph Lukens, an electrical engineer at Purdue University in Indiana, and lead author of the latest study. “It doesn't just prevent eavesdroppers from reading your data — they wouldn’t even know there was any data there to hack.”

Last year, a team led by Alexander Gaeta, an optical physicist at Cornell University in Ithaca, New York, built the first working temporal cloak by manipulating laser pulses3. But the time windows opened up too rarely to be able to hide data coming in at telecommunication rates.

To speed up the cloaking rate, Lukens and his colleagues exploited a wave phenomenon that was first discovered by British inventor Henry Fox Talbot in 1836. When a light wave passes through a series of parallel slits called a diffraction grating, it splits apart. The rays emanating from the slits combine on the other side to create an intricate interference pattern of peaks and troughs. Talbot discovered that this pattern repeats at regular intervals, creating what is now known as a Talbot carpet. There is also a temporal version of this effect in which you manipulate light over time to generate regular periods with zero light intensity, says Lukens. Data can be then be hidden in these holes in time.

Lukens' team created its Talbot carpet in time by passing laser light through a 'phase modulator', a waveguide that also had an oscillating electrical voltage applied to it. As the voltage varied, the speed at which the light travelled through the waveguide was altered, splitting the light into its constituent frequencies and knocking these out of step. As predicted, at regular time intervals, the separate frequencies recombined destructively to generate time holes. Lukens’ team then used a second round of phase modulation to compress the energy further, expanding the duration of the time windows to 36 picoseconds (or 36 trillionths of a second).

The researchers tested the cloak to see if it was operating correctly by inserting a separate encoded data stream into the fibre during the time windows. They then applied two more rounds of phase modulation — to “undo the damage of the first two rounds”, says Lukens — decompressing the energy again and then combining the separated frequencies back into one. They confirmed that a user downstream would pick up the original laser signal alone, as though it had never been disturbed. The cloak successfully hid data added at a rate of 12.7 gigabits per second.

Unfortunately, the current set-up may be a little too good at hiding things. “We erased the data-adding event entirely from history, so there’s no way that data could be sent as a useful message to anyone, even a genuine recipient,” says Lukens. However, McCall is impressed with the team’s effort and believes that future modifications will allow them, or others, to send secret messages successfully. He credits Lukens' team for significantly boosting the cloak’s efficiency. “This brings temporal cloaks within reach of practical applications,” says McCall.

Ironically, the first application of temporal cloaks may not be to hide data, but to help them to be read more accurately. The team has shown that splitting and recombining light waves in time creates increased periods in which the main data stream can be made immune to corruption by inserted data. “This could be useful to cut down crosstalk when multiple data streams share the same fibre,” says Lukens.

Gaeta agrees that the primary use for cloaking will probably be for innocent, mundane purposes. “People always imagine doing something illicit when they hear ‘cloaking’,” he says. “But these ways for manipulating light will probably be used to make current non-secret communication techniques more sophisticated.”