Protective caps known as telomeres that help to preserve the integrity of chromosomes can also predict lifespan in young zebra finches (Taeniopygia guttata), researchers have found.

Telomeres are stretches of repetitive DNA sequence that are found at the ends of chromosomes, where they help to maintain cell viability by preventing the fraying of DNA and the fusion of one chromosome to another. The relationship between normal ageing and telomere decline has long been suspected — and even asserted by some companies that measure customers’ telomere length — but the link remains unproven in humans (see 'Spit test offers guide to health'). 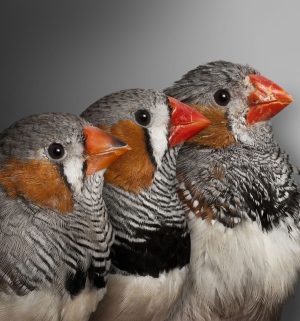 The lifespan of zebra finches is strongly correlated with the length of the chromosome caps that protect their DNA, known as telomeres, particularly at 25 days old.

Most studies of longevity and telomere length have relied on only one or two measurements from an individual during their lifespan. But population ecologist Pat Monaghan of the University of Glasgow, UK, and her colleagues found that measuring telomere length periodically over the course of a zebra finch’s life revealed a tight association between length and lifespan — particularly when those measurements were taken when the birds were only 25 days old. The results are reported online this week in Proceedings of the National Academy of Sciences1.

“This study is important,” says María Blasco, a telomere researcher at the Spanish National Cancer Research Centre in Madrid. “It’s the first time that normal differences in telomere length have been shown to be predictive of longevity.” Blasco was not involved in the current study, but serves as chief scientific adviser for Madrid-based company Life Length, which advertises telomere length measurements as a service for determining an individual’s "biological age".

Nevertheless, Monaghan cautions against rushing out to have your telomeres measured. “It’s not going to be possible to translate this immediately to the human situation, in which you have a long-lived species with a heterogeneous environment,” agrees Duncan Baird, who studies telomeres at Cardiff University, UK. “That’s quite different.”

Previous studies have firmly linked the presence of abnormally short telomeres with severe diseases that cause accelerated ageing, such as Dyskeratosis congenita, but attempts to link telomere length to normal ageing have largely failed. The key problem in those previous studies, says Monaghan, is that researchers took samples only once or twice from a single individual during their lifetime, rather than sampling periodically.

For her studies, Monaghan chose the zebra finch: a small Australian bird that breeds well in captivity and lives for up to nine years. The lifespan of the birds was not so long that the study would take decades to complete — as it would in humans — but also not as short as the lifespan of mice, which usually live for only a couple of years. Short-lived animals have a fundamentally different life history, says Monaghan. “They’re subjected to very different selection pressures than long-lived species,” she says. “They have more rapid reproduction and in general don’t invest as much in body maintenance.”

Monaghan’s study used 99 zebra finches to show that longer lifespan was associated with longer telomeres at all of the ages at which the researchers took their samples. But that association was the strongest when the birds were only 25 days old: an age at which they are nearly fully grown, but are sexually immature and still rely on their parents for food. It is difficult to pin down an equivalent age in humans, cautions Monaghan, because humans continue to grow after reaching sexual maturity. But the closest analogy is probably to a prepubescent human.

The significance of those early measurements is not clear, and Monaghan’s team is now trying to determine if that 25-day measurement is telling them about the inherited telomere length of the birds, or about some early environmental influence on telomeres. Stressful events, for example, have been shown in some cases to shorten telomeres.

Although the study has found a correlation between telomere length and longevity, that does not mean that the length of a telomere directly influences lifespan, cautions Baird. “You can’t say from these data that telomeres are driving the ageing process,” he says. “It could simply be that telomere length is a marker of cellular proliferation or cell turnover.” Baird notes that additional measurements that reflect the overall health of the birds, such as their weight, could also correlate with lifespan.

Furthermore, both Baird and Monaghan stress that the zebra finch results were generated by analysing data from a population of birds. Those data may not hold true for individuals, says Baird.  “You can see trends at the population level,” he says. “But when you get down to the individuals within those populations, I don’t think that information will be meaningful.”