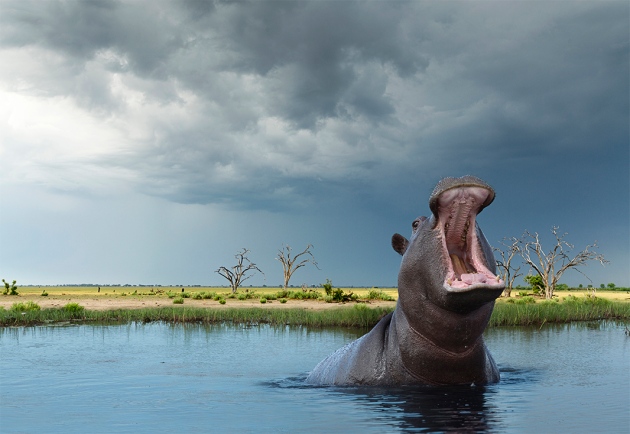 The common hippo spends its days in rivers and nights on land.

Quick, huge and deadly, the common hippo is the king of Africa’s rivers. Now fossils suggest that hippos assumed power swiftly and that changes in vegetation helped to propel their rise.

An analysis of hippo teeth excavated at an Ethiopian fossil site suggests that the hippo went from bit player to boss of the waterways in less than 1.5 million years1. Earlier research had established that hippos exploded in abundance and diversity at some point in their history, but how long this ‘hippopotamine event' took and when it happened was unknown2, 3.

The latest study concludes that the event began around 8 million years ago, as new grass types spread through Africa. This timing supports the theory that the hippo’s ascent is linked in part to the spread of these grasses. Today’s common hippo (Hippopotamus amphibius) lolls in the water during the day, emerging at night onto land to tuck into nearby greenery, especially grasses.

“Thanks to this site, we can document how this sudden burst of hippos occurred in the fossil record,” says co-author Jean-Renaud Boisserie, a palaeontologist at France’s National Center of Scientific Research in Poitiers and at the French Centre for Ethiopian Studies in Addis Ababa. “It’s clear to me this expansion of hippos is really related to this change in vegetation.” The shift, which was probably tied to changes in the climate, boosted plants that thrive in hot, dry areas.

The fossils were excavated over the past decade by a Japanese–Ethiopian team working at Ethiopia’s Chorora site, also the name of a local village. The fossils are mostly teeth, but those are distinctive enough to recognize new species, Boisserie says. The star of the show is Chororatherium roobii, a new species named in part after a local word for hippopotamus. The animal lived roughly 8 million years ago and probably spent much of its time in the water. It weighed perhaps half as much as the 1,400-kilogram common hippo.

Chororatherium roobii’s teeth have similarities to those of Kenyapotamus, an older, more primitive hippo. But they also bear modern features, such as the pattern of cusps on the lower molars. The thicker enamel on the C. roobii teeth would have been suitable for eating grasses, although the researchers cannot say for sure what the animal ate. These traits mark C. roobii as the first modern hippo, Boisserie says, and a transitional species between the archaic beasts that came before it and the larger hippos that started appearing half a million years later.

Chorora’s fossil wealth helped Boisserie and his team to chart the hippo’s climb to prominence. Hippo remains account for only 6% of fossil specimens in a stratum from 8.5 million years ago. But the animals account for more than 30% of identified specimens 7.6 million years old or younger, which is comparable to fossil sites of similar age in Kenya and Chad.

The analysis helps researchers to close in on when hippos began to dominate Africa’s riversides, says biological anthropologist Colin Groves of the Australian National University in Canberra. The idea that grasses had a role “looks a good hypothesis”, he adds. “Something had to have caused the hippos to sprout so rapidly.”

But the findings from the teeth might be overturned if researchers discover other remains, says Eleanor Weston, an independent mammalian palaeontologist in the United Kingdom. A jawbone or skull “might completely change the story”, she says. Boisserie agrees that’s possible but says the teeth of C. roobii look exactly as would be expected in an animal leading to today’s hippo species.