A joint initiative hopes to understand the effects of marijuana on young brains.

When the states of Colorado and Washington voted to legalize marijuana in 2012, the abrupt and unprecedented policy switch sent the US National Institute on Drug Abuse (NIDA) into what its director Nora Volkow describes as “red alarm”. Although marijuana remained illegal for people under the age of 21, the drug’s increased availability and growing public acceptance suggested that teenagers might be more likely to try it (see ‘Highs and lows’). Almost nothing is known about whether or how marijuana affects the developing adolescent brain, especially when used with alcohol and other drugs.

The new laws, along with advances in brain-imaging technology, convinced Volkow to accelerate the launch of an ambitious effort to follow 10,000 US adolescents for ten years in an attempt to determine whether marijuana, alcohol and nicotine use are associated with changes in brain function and behaviour.

At a likely cost of more than US$300 million, it will be the largest longitudinal brain-imaging study of adolescents yet. Researchers are eager to study a poorly understood period of human development — but some question whether it is possible to design a programme that will provide useful information about the effects of drugs.

“It’s definitely an idea that’s overdue,” says Deanna Barch, a psychologist at Washington University in St. Louis, Missouri. “The downside is it’s a lot of eggs in one basket.”

The exact design of the programme is still in flux. In May, NIDA held a planning meeting with the National Institute on Alcohol Abuse and Alcoholism, the National Cancer Institute and the National Institute of Child Health and Development (NICHD), which will help to fund the project. The partners decided to recruit participants at the age of ten. Roughly every two years, researchers will image the children’s brains, perform psychiatric and cognitive tests, and examine factors such as genetics and environmental exposures. 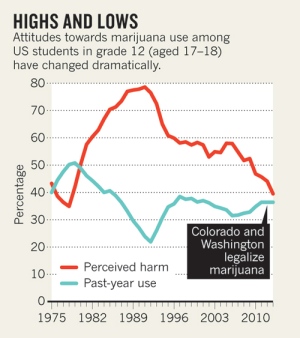 To enlist enough participants likely to use drugs, the study will recruit largely from high-risk groups, such as children of low socio-economic status or those whose parents use drugs. Volkow says that the group plans to seek input from colleagues at November’s Society for Neuro­science meeting in Washington DC before recruiting researchers for the programme.

Hugh Garavan, a psychologist at the University of Vermont in Burlington, says that there is much to recommend such an analysis. He and his colleagues reported in July — on the basis of a study of 692 European teen­agers — that they had identified brain structures and activity patterns that could predict with around 70% accuracy which 14-year-olds would become binge drinkers by the age of 16 (R. Whelan et al. Nature http://doi.org/t5t; 2014).

A larger study such as NIDA’s is the obvious next step, he says, because it will help researchers to account for the myriad environmental and genetic factors that influence development. “I can anticipate this becoming a landmark study,” he adds.

Even if the larger human study does not reveal new information about the effects of drugs, it will certainly shed light on the normally developing brain, says Lisa Freund, a developmental psychologist at the NICHD. Volkow says that NIDA plans to make all trial data available to researchers, which could inspire further studies.

But recruiting and retaining so many participants will be challenging, requiring researchers to win the trust of children and their families and to ensure that participants are not burdened by the drug tests and brain scans. The scientists will also need to be flexible in the face of rapidly improving brain-imaging techniques, says Terry Jernigan, a cognitive scientist at the University of California, San Diego. Whatever technology is chosen is likely to be obsolete by the study’s end, she cautions; upgrading technology haphazardly could make it difficult to compare data across years or study sites. Researchers could use both new and old imaging methods during transition periods, but that could quickly drive up costs.

Others question whether enough is known about the developing brain to identify the mechanisms underlying certain specific conditions. Some studies have linked adolescent use of marijuana to psychosis and to onset of schizophrenia in those at risk, but it is unclear whether this is the case — and if so, whether the drug is a trigger or the teenagers are self-medicating. Because researchers cannot control the drug’s timing and dosage, it will be hard to resolve that question in relation to what is happening in the brains of participants who develop psychosis.

“It’s almost impossible to establish direct causality” in such cases, Volkow says. Yet she hopes that the NIDA study’s huge sample size will reveal broader clues, such as differences in brain structure between drug users and non-users. The institute is considering running a parallel brain-imaging study on non-human primates to help to address this.

B. J. Casey, a psychologist at Cornell University in New York City, hopes that NIDA will address the concerns raised by scientists. “Once you start something like this, it’s hard to stop even if the outcomes aren’t telling, because people are so invested,” she says.