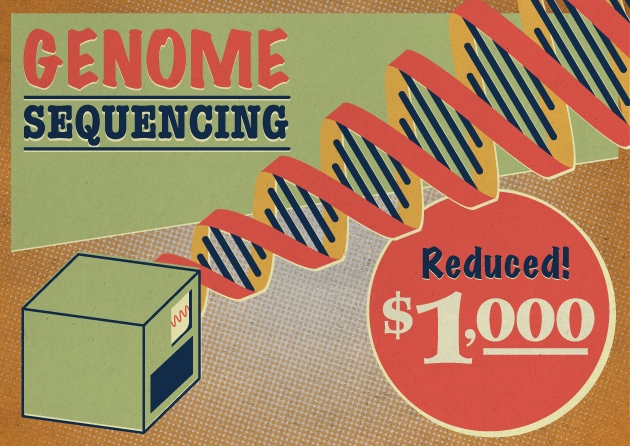 In Silicon Valley, Moore's law seems to stand on equal footing with the natural laws codified by Isaac Newton. Intel co-founder Gordon Moore's iconic observation that computing power tends to double — and that its price therefore halves — every 2 years has held true for nearly 50 years with only minor revision. But as an exemplar of rapid change, it is the target of playful abuse from genome researchers.

In dozens of presentations over the past few years, scientists have compared the slope of Moore's law with the swiftly dropping costs of DNA sequencing. For a while they kept pace, but since about 2007, it has not even been close. The price of sequencing an average human genome has plummeted from about US$10 million to a few thousand dollars in just six years (see ‘Falling fast’). That does not just outpace Moore's law — it makes the once-powerful predictor of unbridled progress look downright sedate. And just as the easy availability of personal computers changed the world, the breakneck pace of genome-technology development has revolutionized bioscience research. It is also set to cause seismic shifts in medicine.

In the eyes of many, a fair share of the credit for this success goes to a grant scheme run by the US National Human Genome Research Institute (NHGRI). Officially called the Advanced Sequencing Technology awards, it is known more widely as the $1,000 and $100,000 genome programmes. Started in 2004, the scheme has awarded grants to 97 groups of academic and industrial scientists, including some at every major sequencing company.

It has encouraged mobility and cooperation among technologists, and helped to launch dozens of competing companies, staving off the stagnation that many feared would take hold after the Human Genome Project wrapped up in 2003. “The major companies in the space have really changed the way people do sequencing, and it all started with the NHGRI funding,” says Gina Costa, who has worked for five influential companies and is now a vice-president at Cypher Genomics, a genome-interpretation firm in San Diego, California.

The $1,000 genome programme, now close to achieving its goal, will award its final grants this year. As technology enthusiasts look to future challenges, the coming milestone raises questions about how the roughly $230-million government programme managed to achieve such success, and whether its winning formula can be applied elsewhere. It benefited from fortuitous timing and the lack of an entrenched industry. But Jeffery Schloss, director of the division of genome sciences at the NHGRI in Bethesda, Maryland, who has run the programme from its inception, says that its achievements also suggest that there are ways to navigate public–private partnerships successfully. “One of our challenges is to figure out what is the right role for the government; to not get in the way, but feed the pipeline of private-sector technology development,” he says. 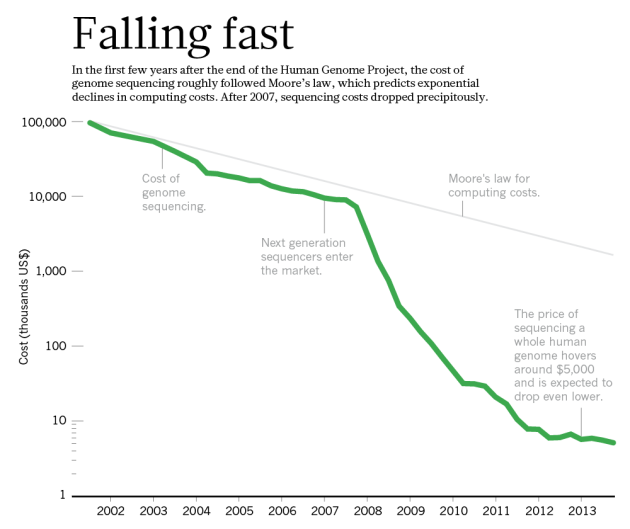 The quest to sequence the first human genome was a massive undertaking. Between 1990 and the publication of a working draft in 2001, more than 200 scientists joined forces in a $3-billion effort to read the roughly 3 billion bases of DNA that comprise our genetic material (International Human Genome Sequencing Consortium Nature 409, 860–921; 2001). It was a grand but sobering success. The project's advocates had said that it would reveal 'life's instruction book', but in fact it did not make it possible to interpret how the instructions encoded in DNA were transformed into biology. Understanding how DNA actually influences health and disease would require studying examples of the links between genes and biology in thousands, perhaps millions, more people.

The dominant technology at the time was Sanger sequencing, an inherently slow, labour-intensive process that works by making copies of the DNA to be sequenced that include chemically modified and fluorescently tagged versions of the molecule's building blocks. One company, Applied Biosystems in Foster City, California, provided the vast majority of the sequencers to a limited number of customers — generally, large government-funded laboratories — and there was little incentive for it to reinvent its core technology.

Still, researchers had seen some advances, including robots that replaced some human work and improvements in devices capable of handling small amounts of liquid. At a 2002 meeting convened by the NHGRI, scientists predicted that such developments would drive costs down at least 100-fold over the next five years. But that was not enough.

They debated what price target would make human genome sequencing routine, the kind of thing a physician might order to help diagnose a patient — on a par with a magnetic resonance imaging scan. “Somebody threw out, to great rolling of eyes, 'a thousand dollars',” recalls Schloss.

That seemed too ambitious, given the state of the technology. “The risk associated with that is not one that your normal investor is willing to spend any money on,” says Eric Eisenstadt, a retired official from the US government's Defense Advanced Research Project Agency who is now a consultant in Reston, Virginia.

So Schloss and the NHGRI stepped in and began to fund basic research on entirely new methods of sequencing, as well as industrial research to develop these technologies for commercial use. The mixture of applied and academic research within a single programme was uncommon at the National Institutes of Health (NIH), the NHGRI's parent agency. The project was also more nimble than the typical NIH grant programme because it allowed the agency to make small awards for work considered promising but risky. “That flexibility is unusual for the NIH,” says Schloss.

“There's a tremendous amount of altruistic sharing of knowledge.”

Furthermore, the programme provided support to sequencing companies that could compete with Applied Biosystems. One of the companies funded in the first round of grants, 454 Life Sciences of Branford, Connecticut, was the brainchild of entrepreneur Jonathan Rothberg. It aimed to develop a method that was faster and cheaper than Sanger sequencing by using a much simpler sample-preparation procedure and running many sequencing reactions simultaneously on a solid surface. But as he tried to round up funding, Rothberg heard the same refrain over and over from investors. “People said, 'Why would you want to sequence DNA fast? We've already done the Human Genome Project.'”

A $7-million award from the NHGRI allowed the company to commercialize a technology called pyrosequencing, which was the first to begin chipping away at Applied Biosystems' monopoly.

The funding commitments also ultimately helped to convince private investors to enter the market. Stephen Turner, founder and chief technology officer of Pacific Biosciences in Menlo Park, California, says that his company's 2005 NHGRI grant of $6.6 million helped to attract subsequent venture-capital funding. The NHGRI's imprimatur had convinced investors to provide the much more substantial money that the company needed to commercialize its technology, which observes DNA synthesis as it occurs in real time.

“Having experts in sequencing technology give us a favourable score was hugely influential,” says Turner.

The NHGRI's investments — typically a few million dollars or less — could not by themselves nurse a technology from lab to market. But they could fund parts of it, such as work on improving a dye, a piece of circuitry or a laser, or tests of combinations of components.

The programme has invested $88 million in technologies based on nanopores and nanogaps. The form of this technology closest to the market involves reading bases as they are threaded through a pore (see Nature 456, 23–25; 2008), a method that has long promised to save costs and time by reading DNA while it is processed. It would negate the need for expensive and slow reactions to make lots of copies of the molecule. But solving basic issues, including how to move the DNA through the pore slowly enough, has been a major challenge. The NHGRI has funded work to overcome these hurdles — including $9.3 million given to collaborators of the company now ushering the concept to market, UK-based Oxford Nanopore Technologies (see Nature http://doi.org/rvm; 2014). Turner says that such investments have helped to cut sequencing costs before the technology hits the shelves.

The $1,000 genome project seeded so many companies and labs that it populated the entire industry with expertise, say sequencing researchers. One of the beneficiaries of that is Illumina in San Diego, currently the market leader in sequencing machines. Illumina, whose technology reads out many short stretches of DNA, has acquired multiple companies and many scientists who were once supported by the NHGRI. “It's through acquisitions that Illumina has become stronger and stronger,” says Mostafa Ronaghi, the company's chief technology officer.

But Schloss's programme also forced competitors to exchange expertise at an annual progress meeting that has become a must-attend event. “That meeting is one of the most important venues for keeping an eye on what's happening in sequencing technology development,” says Turner. “There's a tremendous amount of altruistic sharing of knowledge that occurs.”

Some scientists question certain choices made by the programme. “There's been a lot of money given to the nanopore space, but the objective of nanopore really hasn't hit the mark,” says Costa, for example.

Kevin McKernan, who worked with Costa to develop SOLiD — a sequencing technology based on an enzyme that joins pieces of DNA together — points out that many of the companies funded by the $1,000 genome programme ultimately failed. “Their hit rate probably isn't much better than a venture capitalist,” he says.

But others give Schloss and the programme credit for spreading their investments over an array of academic and industrial work that is diverse enough to allow progress in the face of failures. Many NHGRI-funded firms are now defunct — including 454, and Helicos BioSciences of Cambridge, Massachusetts — but other grant recipients have moved the field forward, often using ideas generated by the shuttered firms.

“The NHGRI funded smaller companies and academic groups to create a pipeline of technologies,” says Ronaghi. “They didn't decide which technologies to bet on.”

Working out what the $1,000 genome programme got right has emerged as a key question as Schloss and the NHGRI shape its successor. Sequencing still needs much improvement, especially in terms of quality. For all of Sanger sequencing's high cost, it remains the benchmark for accuracy. And sequencing costs are no longer dropping as quickly as they were a few years ago.

But researchers are optimistic that another technology will emerge to challenge Illumina. Most think, in fact, that the crucial questions for the field will shift away from technology. Now that sequencing is cheap enough to talk about scanning every patient's genome, or at least the protein-coding portion of it, it is still not clear how that information will translate into improved care (see Nature http://doi.org/rvq; 2014). These more complex issues will require another great leap in genomic science — one that could make the trouncing of Moore's law seem easy.