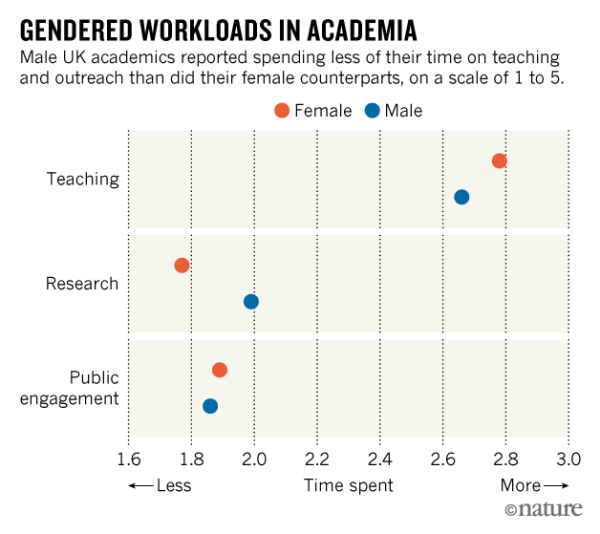 Female academics report spending more time on teaching and public-engagement tasks, and less time on research, than their male counterparts, according to a survey of UK university staff in science-based subjects.

The study of 2,495 male and 2,374 female academics at 43 UK institutions, published by the London-based charity Equality Challenge Unit (ECU) on 5 April, found that the gender difference was small but statistically significant. This was the case even when the effects of factors such as age, seniority and contract type were accounted for.

The finding echoes past research, which found that teaching and non-research-related administrative tasks have a greater impact on women’s careers than men’s, says Elizabeth Pollitzer, director of Portia, a non-profit organization in London that seeks to address gender issues in science.

If men spend more time on research, this could improve their career prospects when research productivity is used as a proxy for scientific merit, “which is nearly always”, says Pollitzer. It could also help to explain why many bibliometric studies have reported lower research productivity for women than for men, she adds.

In interviews following up on the survey, academics suggested that women’s increased focus on teaching and public engagement might put them at a disadvantage, not only because these activities take time away from research, but also because they carry less academic prestige.

Time allocation was self-reported, so it may not accurately reflect real workload, says Meg Urry, an astronomer at Yale University in New Haven, Connecticut, and an advocate for women’s advancement in science. The results could instead reflect the fact that women, more than men, place a high priority on teaching, says Urry. But no one knows what balance of teaching and research is best for science overall, she adds.

The report recommends that institutions examine whether there is a gender difference in how responsibilities are allocated within departments and examine whether their current workload allocation systems are benefiting all staff. The authors also recommend that promotion criteria should include performance in teaching and other non-research academic areas.

Significant differences emerged in men and women’s perceptions of how much support and encouragement they receive. Women were more likely to report that men have better access to professional development, such as mentoring, than women have, and that men receive more invitations to conferences. Men tended to see no such advantage for themselves.

Similarly, almost half of men — 47.3% — believed that neither gender found it easier to obtain a senior post; just 23% of women agreed. Meanwhile, 59.7% of men reported that they had been encouraged or invited to apply for a promotion or a higher-grade job, compared with 48.8% of female respondents.

Academics who belong to more than one minority group, reported being at the greatest disadvantage. Black or minority-ethnic women were the least likely to be in a senior position, such as the head of their school, division or department, and also the least likely to report having been formally invited for promotion or encouraged to undertake activities that would develop their careers.

The survey is the first in the long-standing Athena Survey of Science, Engineering and Technology (ASSET) series to describe how gender and four other characteristics — ethnicity, sexual orientation, disability and age — intersect. “The survey shows clearly the heavier impact of multiple categories of disadvantage,” says Urry. “Women do worse than men, people of colour do worse than white people and women of colour get a double whammy. Ditto with respect to the LGBTQ community, the disabled and other minority groups.”