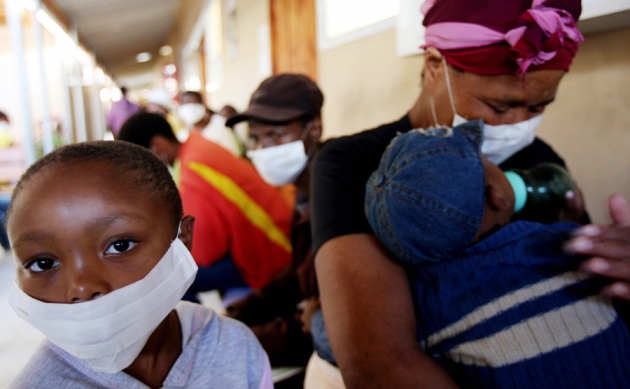 The treatment options for tuberculosis patients, such as these at a health centre in Khayelitsha, South Africa, may be about to expand.

AIDS is infamous for its rampant rise in Africa. Yet the biggest killer of Africa’s HIV-positive population — tuberculosis (TB) — has a much lower profile. Its reach is global: it has appeared in pernicious new drug-resistant forms among addicts, prisoners and impoverished people worldwide. In the face of this deadly march, however, medicine has made little apparent progress.

That is now set to change. Earlier this year, two companies filed for regulatory approval for drugs that should enhance existing TB therapies, and at the XIX International AIDS Conference in Washington DC, researchers unveiled a combination therapy that could cut the time taken to treat drug-resistant TB from two years to just four months.

“The field of TB drug discovery is the most exciting it’s been in 50 years,” says William Bishai, director of the KwaZulu-Natal Research Institute for Tuberculosis and HIV in Durban, South Africa, which is slated to open in October. “I’m very impressed by the combination therapies in development because they’ll give clinicians a roadmap on how to best partner drugs to prevent resistance.”

The progress is being driven by an infusion of government and donor money. And it is being helped by a 2010 change in guidance from the US Food and Drug Administration (FDA), which makes it easier for developers to gain approval for novel drug combinations.

Drug cocktails are a key weapon against TB because Mycobacterium tuberculosis, the bacterium that causes the disease, quickly evolves resistance to individual drugs, says Melvin Spigelman, president of the Global Alliance for TB Drug Development (TB Alliance), a public–private partnership in New York City that sponsored the study on the latest combination therapy.

Spigelman’s group wants to speed the development of such treatments. “After a new drug reaches the market, the traditional route is to work from the standard of care and substitute one drug for another. But if you do it in an incremental way, that will give you incrementally better results,” Spigelman says. “Our goal is to shorten the path to getting a new, cohesive regimen out there in one fell swoop.”

The new combination therapy consists of PA-824, a novel drug in the TB pipeline; moxifloxacin, an antibiotic for treating pneumonia and sinus infections; and pyrazinamide, a TB drug developed in 1952. During a two-week trial, the combination eliminated more than 99% of M. tuberculosis in patients’ sputum. It promises to be far less taxing for patients than the current regimen for drug-resistant TB, which entails injections and two years of swallowing as many as 20 tablets a day with side effects that can include vomiting, seizures, painful nerve damage and permanent hearing loss. The results, described at the AIDS meeting, were subsequently published on 23 July (A. H. Diacon et al. Lancet http://doi.org/h34; 2012).

If full clinical trials confirm its promise, the therapy could prove a boon for HIV-infected people. TB, which is common in its latent form in many parts of the developing world, often becomes active in those who are HIV-positive because of their weakened immune systems.

“When I worked in West Africa,” says John Farley, deputy director of the antimicrobial product division at the FDA, “there were times when our HIV patients would die of drug-resistant TB before we could even get them their antiretroviral therapy.” Unlike some existing therapies, the new combination does not seem to interact adversely with drugs for HIV.

The therapy was discovered during a broader search for untested permutations of emerging and existing drugs that the TB Alliance began in 2007 with funds from the Bill & Melinda Gates Foundation, the US Agency for International Development, Irish Aid and UK Aid. Its developers hope that the FDA’s new guidelines for combination therapies — reserved for emergencies in which patients are dying for lack of treatments — will allow speedy approval. In the past, the FDA requested data to ensure the safety of each independent component of a combination therapy before approving it, says Farley. “But now we think there are other ways to answer that question, through studies in animal models and innovative human trial designs.”

The FDA rule change is new enough that most drug developers are still focusing on individual compounds, but that quest has made progress too (see ‘Renewed attack on TB’). One drug, delamanid from Otsuka Pharmaceutical based in Tokyo, is under review at the European Medicines Agency. And on 2 July, Janssen Pharmaceuticals, headquartered in Raritan, New Jersey, applied for FDA approval of its TB drug, bedaquiline.

Sequella, a biotechnology firm in Rockville, Maryland, is testing combinations of its drug SQ109 and bedaquiline in mice in anticipation of Janssen’s drug getting approval. But Sequella’s executive vice-president for corporate development, Alan Klein, says that the company is filing an independent application for its new drug because the FDA’s process for combinatorial therapies is simply too new. “It can be risky for both parties because if you don’t show good results in combination studies, it might impact your ability to get approval alone,” he says.

Like many of the 21,000 attendees at the AIDS meeting, the TB Alliance wants donors to get the message that years of research will soon pay off in lives saved — as long as the money flows. “If we can get the resources to follow this study up,” Spigelman vows, “we’ll get this combination out.”