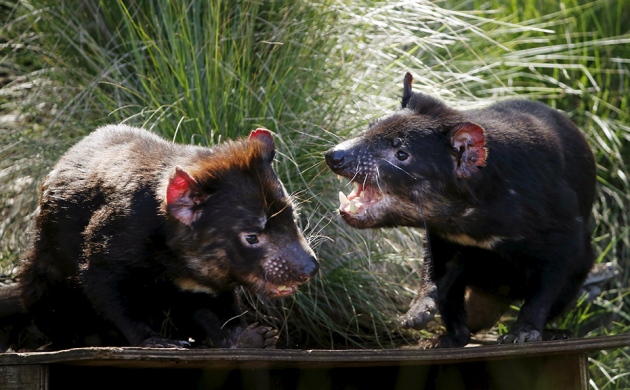 Tasmanian devils can transmit a contagious facial cancer to each other during social interactions.

A contagious facial cancer that is almost always fatal has cut a wide swathe through the population of Tasmanian devils since 1996. The disease has reduced the devil population by 80%, and researchers have predicted that the cancer will drive the animals to extinction within decades.

But a study published on 30 August in Nature Communications1 offers hope. Researchers have found that Tasmanian devils have developed some genetic resistance to the disease in just four to six generations.

Evolving resistance within so few generations is rare for vertebrates, says Beata Ujvari, an evolutionary ecologist at Deakin University in Melbourne, Australia, who was not invovled in the study. Australia’s rabbit population quickly developed resistance to myxomatosis, a fatal viral infection. But it took 50–80 generations to do so.

The devil facial-tumour disease jumps from one Tasmanian devil to another when they bite each other during social interactions. And even though the cancer has wiped out up to 95% of some devil populations, small groups of the carnivorous marsupial have managed to hang on.

The researchers wanted to find out how the devils persisted in the face of such a devastating disease. So Andrew Storfer, an evolutionary geneticist at Washington State University in Pullman, and his colleagues sequenced about one-sixth of the devil’s genome using 294 individuals from 3 wild populations. They used samples collected before and after those groups first encountered the facial cancer.

The team found versions of five genes spread across two regions of the genome that seemed to be increasing in frequency throughout the devil populations. Storfer says that two of the genes, CD146 and THY1, are particularly interesting because they help the immune system to recognize foreign cells. Usually, cancerous cells originate in the host, but devil facial-tumour disease is highly unusual. All instances of it come from the cells of the first known affected Tasmanian devil. So Storfer thinks that CD146 and THY1 would be the most likely candidates involved in resistance to this disease because the genes might allow the animal’s body to recognize the tumour cells as ‘foreign’.

Storfer says that his team was able to rule out the possibility that these genetic changes were random, because the same genes were proliferating in three geographically distinct populations.

The research offers several avenues of hope for Tasmanian-devil conservation. “It’s one of the key cornerstones in saving them; identifying these regions which might provide resistance,” says Ujvari.

If researchers can screen captive devils for the beneficial genes, they can breed these animals in carefully managed populations in Tasmania and mainland Australia, says Storfer. His group also hopes to find devils on Tasmania’s far west coast — the only part of the country that hasn’t been hit by the facial cancer — that carry the resistance genes.

“It has a lot of potential for future vaccination studies,” says Hannah Siddle, a molecular immunologist who is developing vaccines for the disease at the University of Southampton, UK. For instance, vaccinations or immunotherapy that target these genes might help the devils’ immune systems to fight off the cancer.

First, though, Storfer’s lab needs to confirm that the genes do convey resistance to the cancer. A bulletproof way to do that would be to purposely infect Tasmanian devils that carry the beneficial versions of those genes. But that would be “completely unethical and illegal”, says Storfer, because Tasmanian devils are an endangered species. So instead, the researchers plan to tinker with tumour-cell lines in the lab to see whether the genes that the team has identified disrupt the cancerous cells.

The dwindling Tasmanian-devil population numbers, and the animals’ high degree of inbreeding, make these mammals particularly vulnerable to disease. But, despite that, the current research gives Ujvari hope. “Personally,” she says, “I think they will make it.”

This story originally stated that five genes were increasing in frequency within sampled Tasmanian devil populations. It should be versions of five genes. The story has been changed to reflect that.