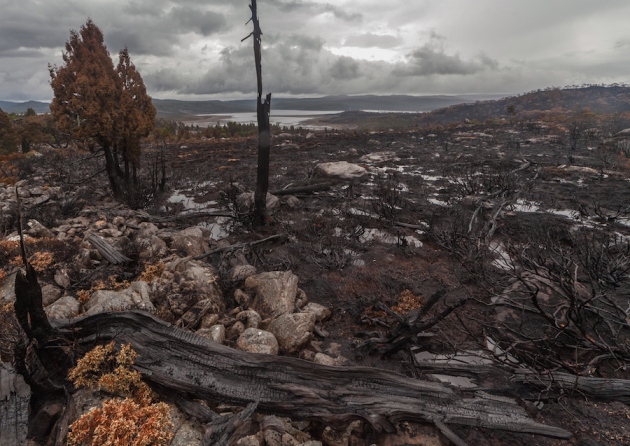 Large Australian bushfires have become so common that they hardly seem like news1, but these are different. Rather than burning swathes of fire-adapted vegetation such as Eucalyptus or Banksia, many of the recent blazes have raged through ecosystems that are not adapted to fire at all — relict forests from when Tasmania was a part of the Gondwana supercontinent, more than 180 million years ago.

When fires burn the pencil pines (Athrotaxis cupressoides) and King Billy pines (Athrotaxis selaginoides) that dominate these high-altitude ecosystems, they kill not only the trees but also their seeds — and incinerate the peaty soil they grow in. In the hardest-hit areas, natural regeneration of these ancient forests is all but impossible.

The trees, many of which are more than 1,000 years old, have been able to survive in Tasmania thus far because its climate is colder and wetter than that of the mainland. But climate change may tip the odds against them.

The 'dry' lightning strikes that ignited the current fires — from thunderstorms in which most rain evaporates before reaching the ground — used to be vanishingly rare in western Tasmania, but climate change is thought to have made such storms more common in recent years. Tasmania saw one of the driest years on record in 2015. Furthermore, logging and dry conditions in the rainforest that surrounds these alpine forests have reduced its ability to act as a firebreak.

“There was no doubt pencil pine was on the mainland, but the fire and climate regime meant it couldn’t persist,” says David Lindenmayer, a forest ecologist at Australian National University in Canberra. “If Tasmania is going to become more like the mainland, there is a distinct possibility that its time is going to be done. That is a huge loss for the world.”

Just a small percentage of the alpine and central-plateau fire-sensitive ecosystems in northwestern Tasmania have been killed by the blazes, of which 69 were still burning on 4 February. But if fires become more frequent, that may spell the beginning of the end.

“If you have 2% [burning] every 10 or 15 years, it is not long before it is pushed into only the most fire-protected refuges,” says Jamie Kirkpatrick, a geographer and conservation ecologist at the University of Tasmania in Hobart.

To the chagrin of ecologists and bushwalkers, the fires have threatened several iconic landscapes, including the Walls of Jerusalem National Park and Mount Anne, the highest peak in southwestern Tasmania. Hobart-based photographer Dan Broun and a colleague hiked up to a burned alpine area last weekend. When they crested the plateau, they were greeted by a dead world. “We were in shock. What we were seeing was complete and utter devastation,” says Broun.

There have already been discussions about reseeding the burnt areas, but experts warn that it may not work; it is not at all clear that the strategy would make sense in a “new normal” in which fires are predicted to run rampant in the area. Furthermore, grazing by wallabies and wombats keeps many seedlings from ever growing tall enough to reproduce. The existing pines may date from a slender window of time when heavy snows kept grazing animals away for long enough for the trees to grow out of their reach — a process that takes 50 years.

With threats to the region’s iconic forests clear, University of Tasmania ecologist David Bowman has called for an increased effort to collect seeds of fire-sensitive Tasmanian species and conserve them in another location, perhaps even on a sub-Antarctic island that would be safer from fire.

That would require a lot of seeds. Luckily, 2015 was a mast year — a period in which trees produce unusually large crops of cones and seeds — for many high-altitude conifers in Tasmania. In March and May, government biologists collected 1.57 million viable seeds from pencil and King Billy Pines, as well as the shrub-like Cheshunt pine (Diselma archeri) and drooping pine (Pherosphaera hookeriana).

“We knew these sorts of [fire] events were likely in the future and the species we were looking at were so vulnerable to fire,” says James Wood, head of the Tasmanian Seed Conservation Centre at the Royal Tasmanian Botanical Gardens in Hobart. “Effectively, we are a Noah’s ark. We are just trying to hold onto material so it is not lost permanently.”