John strains to recall the gap between learning that he had hepatitis C and deciding to get treated: it was either four years or five. His thinking is clouded by the combination of three drugs that he is taking to clear the infection. After the treatments’ other side effects set in — severe flu-like symptoms, depression and exhaustion — he took leave from his job as a chef in New York. John, whose name has been changed to protect his privacy, was at high risk of catching the virus, having once been addicted to crystal methamphetamine. But as a 51-year-old, he is also a baby boomer — a member of the generation born between 1945 and 1965 — millions of whom will face the disease and its sometimes harrowing treatment.

Better drugs are on the way. But the possibility of improved treatment is intensifying a debate about whether to screen a broad swathe of the US population for hepatitis C.

The drug is one of at least ten in phase III trials in the United States that promise to improve results or reduce side effects. The first of these drugs could reach the market as early as 2014, and a recommendation from the US Centers for Disease Control and Prevention (CDC) in Atlanta, Georgia, to screen an entire generation for the disease could create vast demand for them.

John is a part of a demographic time bomb. Up to 4 million Americans are infected with hepatitis C, which can irreparably damage the liver and lead to liver cancer, but because it inflicts injury slowly over decades, as many as 85% of carriers do not know that they have it. Baby boomers account for about 27% of the US population, but up to 75% of those infected with hepatitis C, possibly because injecting drugs — one infection route — was more common during their youth than in other eras. Last August, the CDC recommended screening the entire generation of people born between 1945 and 1965, as well as people in high-risk populations such as intravenous-drug users. The CDC predicts that generational screening would find an extra 800,000 cases and prevent at least 120,000 deaths. “We have an opportunity to make a real dent in the impact of the disease,” says Kimberly Page, an epidemiologist at the University of California, San Francisco. 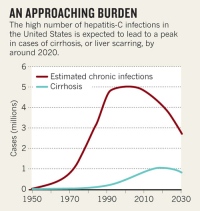 John’s doctor, infectious-disease specialist Kristen Marks of Weill Cornell Medical College in New York, says that screening is especially important for baby boomers because early symptoms of hepatitis C, such as fatigue and malaise, are difficult to distinguish from signs of ageing. People dismiss symptoms, says Marks, and some might not remember trying intravenous drugs in their youth. Even if they do, she adds, “they might not tell their doctor”. A peak in cases of liver scarring from untreated hepatitis C is expected in the next few years (see ‘An approaching burden’). But with the new drugs on the horizon, now is an optimistic time for treatment, says Marks. “Historically, not having good treatments was a disincentive for screening,” she says. “Now, I think there’s a renewed interest.”

But last November, the US Preventive Services Task Force (USPSTF), a panel of experts assembled by the US Department of Health and Human Services, released a draft statement giving the screening recommendation a ‘grade C’. That means that doctors should consider birth year when deciding whether to offer screening, but should take other factors into account. The mediocre grade could discourage many health-care providers — including Medicaid, the provider for people with low incomes — from pushing screenings.

As with its controversial recommendations in 2009 and 2012 to limit screening for breast and prostrate cancer, the USPSTF has tried to balance the benefits of screening against the risk of unnecessary treatment. The combination therapies used to combat hepatitis C can cost US$1,100 per week and last for up to a year, with severe side effects. Other treatments cost $4,100 per week. (Gilead declined to comment on the future price of sofosbuvir-based treatments.)

“We have an opportunity to make a real dent in the impact of the disease.”

Roger Chou, an internal-medicine specialist at Oregon Health and Science University in Portland and a scientific reviewer for the USPSTF, adds that in most patients, the disease is imperceptible: only 20% of people develop liver scarring in the first 20 years of infection, according to the CDC. Of the few baby boomers that might be caught through additional screening, says Chou, some will not need to be treated.

But new drugs, however expensive, could change the calculus for doctors and patients, says Mark Eckman, a physician at the University of Cincinnati in Ohio, who has calculated that even screening the entire US population would be cost effective given the financial and personal burdens of living with liver diseases (M. H. Eckman et al. Clin. Infect. Dis. 56, 1382–1393; 2013).

For example, sofosbuvir, which is one of a set of new antiviral drugs that specifically target hepatitis C rather than viruses in general, can achieve success rates above 90% in combination treatments of just three months. The drug inhibits the virus’s RNA polymerase, preventing viral replication. It is also being tested without the classic combination drug of pegylated interferon, which boosts the immune system but causes harsh side effects.

The USPSTF is still reviewing its draft recommendations, but it is likely to make a final decision in the next few months, well before approval of sofosbuvir or other new drugs could alter the calculations.

That is too bad, says David Thomas, a viral-hepatitis specialist at Johns Hopkins University in Baltimore, Maryland, who argues that the next generation of drugs helps to justify wide-scale screening. “It makes a pretty easy case for doing something different,” he says.

This story wrongly implied that the US Preventive Services Task Force considers financial costs when evaluating the risks and benefits of screening. It does not. The text has now been corrected to reflect this.