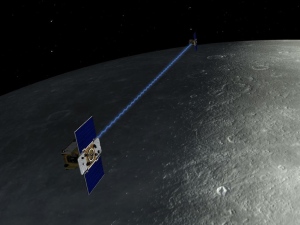 The GRAIL mission so far has found little evidence for some hypothetical ancient impact basins.

A sneak peek at the first results from a NASA mission to measure the Moon’s gravitational field hints at a lunar crust that is only half as thick as once thought.

There were a few gasps among scientists in the audience at a 13 September seminar at the Harvard-Smithsonian Center for Astrophysics in Cambridge, Massachusetts, as they took in the data revealed by Maria Zuber, principal investigator for NASA’s Gravity Recovery and Interior Laboratory (GRAIL) mission. Zuber, a planetary scientist at the Massachusetts Institute of Technology in Cambridge, showed a crisp, high-resolution gravitational map made with data collected by GRAIL’s twin spacecraft between March and June of this year.

“We are three to four times better in resolution compared to Kaguya and Lunar Prospector,” said Zuber, referring to two previous missions that mapped the Moon's graviational field. GRAIL’s results have not yet been published or released publicly by NASA, and Zuber was not at liberty to give an interview.

Yet her talk, and the thrilled reactions from those present at the seminar and others interviewed by Nature, suggest that GRAIL is poised to have a profound effect on scientists’ understanding of the origins and early evolution of the Moon when its results are released in the coming weeks.

GRAIL’s two probes, named Ebb and Flow by schoolchildren in a NASA competition, were launched in September 2011 (see ‘Twins to Probe Moon’s Heart’). The first probe began orbiting the Moon on 31 December 2011, with the second joining the next day. By March, they had begun detailed mapping. The two spacecraft exchange radio signals, recording fluctuations in their relative positions that are then used to reveal tiny accelerations and decelerations caused by variations in the Moon’s gravitational field. The average altitude of the primary mission was 55 kilometres —  much lower than the orbit used by the Gravity Recovery and Climate Experiment (GRACE), a similar gravity-mapping mission for Earth that has to fly higher to avoid atmospheric friction. Occasionally, the GRAIL operations team brought the craft lower than 20 kilometres to further improve the resolution of the data. “Nothing beats flying low,” says Zuber.

Zuber gave the packed auditorium a heads-up on three science results. The first is that the Moon’s crust seems to be thinner than thought. When lunar geologists first estimated the thickness of the Moon’s crust, using data from seismometers placed by the Apollo astronauts, they concluded that it was around 60 kilometres thick. Subsequent re-analyses of those data brought the estimate down to around 45 kilometres. Now, GRAIL’s results suggest that the crust’s average thickness is only 30 kilometres, says Zuber.

That piques the interest of Linda Elkins-Tanton, a planetary scientist at the Carnegie Institution for Science in Washington DC. The Moon’s crust is thought to have formed when the mineral anorthosite crystallized and floated out of the ocean of magma on the body’s surface soon after it was formed out of a collision between the Earth and a giant asteroid. “The crustal thickness is an amazingly evocative clue about the origin of the Moon,” says Elkins-Tanton.

She adds that researchers are more likely to be interested in the variations in crustal thickness seen by GRAIL, because lunar scientists are already challenged in explaining why its crust is much thicker on its far side than on its near side. Given an average thickness of 30 kilometres, the crust in some regions on the near side may be unexpectedly thin, which will be particularly difficult to model.

The second finding is that there is a high correlation between variations in the Moon’s gravitational field and its topography. “This, to me, is one of the most surprising things we found,” says Zuber. The result suggests that the gravitational field of the Moon is dominated by its deep craters rather than the structure of its interior. This relationship between topography and gravity was closer for the Moon than for other terrestrial bodies such as Mars, Venus and Earth, Zuber says. “It actually makes you wonder how well we understand the other terrestrial planets.”

Bradley Jolliff, a planetary scientist at Washington University in St Louis, Missouri, says that this high correlation ”will spark a good bit of debate”. He adds that he also is confident that the full GRAIL data set will include some regions where the correlation is weaker — revealing important density variations in the Moon's subsurface.

Third, Zuber reported that GRAIL has not been able to confirm some of the larger and older impact basins hypothesized to exist on the Moon’s surface. Lunar scientists examining the Moon’s surface have tried to unravel the history of asteroid impacts — which would illuminate the evolution of not only the Moon but also other bodies of the inner Solar System — by defining areas where large impact basins might underlie more visible and obvious craters. But GRAIL hasn’t found many of the hypothetical basins, Zuber says.

Zuber did not discuss one key goal of GRAIL: understanding the Moon’s deep interior structure and core. Clive Neal, a lunar geologist at the University of Notre Dame in Indiana, says that it will take more time to make these more complicated interpretations from the data. Zuber says the data from GRAIL’s primary mission have already been processed and analysed, which puts the mission a year ahead of schedule.