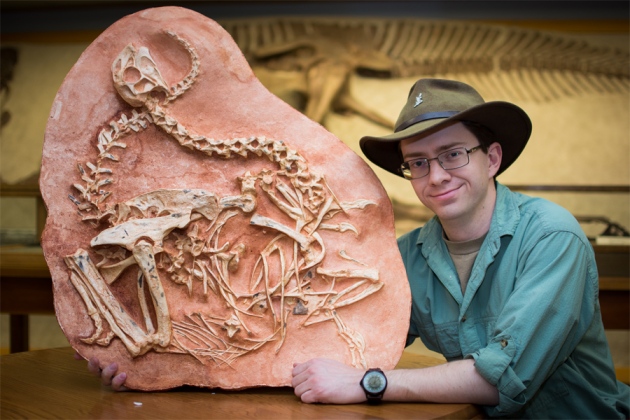 The fossil remains of two oviraptorosaurs — nicknamed 'Romeo and Juliet' — were reported in 2001.

Researchers think they have come up with a way to tell fossils of male dinosaurs from those of females — at least for some small feathered species. The key differences between the sexes lie in bones near the base of the tail, the scientists reported on 31 March in Scientific Reports1.

The team examined a pair of fossils unearthed in Mongolia in the mid-1990s and first described in 20012. Because the turkey-sized oviraptorosaurs (“egg-thief lizards”) were found mere centimetres from each other in a 75-million-year-old rock layer, some scientists have nicknamed the pair 'Romeo and Juliet'.

The joints in the creatures' vertebrae were fused, so researchers think that the dinosaurs had stopped growing — meaning they were adults, says Scott Persons, a vertebrate palaeontologist at the University of Alberta in Edmonton, Canada, and a co-author of the study.

But determining whether the pair were indeed male and female was tricky, because, as with most fossils, no trace of soft tissue remains: only the bones are preserved. One fossil is a complete skeleton, whereas the other is missing the middle and end of its tail. But that was enough to reveal distinct differences in the length and shape of blade-like bones called chevrons, which jut down from the vertebrae near the base of the tail and provide attachments for muscles and tendons.

A number of chevrons in one of the fossils were longer and had broader tips than those in the other specimen. The differences do not seem to be due to injury or disease, says Persons. Nor do they seem to be the result of changes in the bones during fossilization.

Instead, the researchers suggest that the variations are a sign of sex differences. The bones might be shorter in females to ease the process of laying eggs. In males, a set of longer, broad-tipped chevrons could have offered a better anchor for a penis-retracting muscle that the creatures are presumed to have had.

But the most tantalizing explanation might be that males needed larger chevrons to anchor the muscles that controlled their flexible, feather-tipped tails. The researchers suspect that male oviraptorosaurs shook their tail feathers in intricate displays to woo potential mates, akin the the behaviour of modern-day peacocks.' 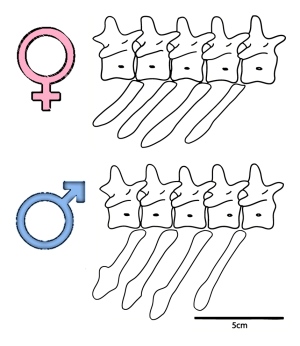 The shape and size of chevron tail bones varied between the fossils that researchers tentatively identified as female (top) and male.

Thomas Holtz, a vertebrate palaeontologist at the University of Maryland in College Park, says that the theory is intriguing, but not yet totally convincing. Because the study's authors compared only two oviraptorosaur specimens, they cannot rule out the possibility that the differences in chevron shape are merely variations on a spectrum, rather than signs of sexual dimorphism.

Analyses of other oviraptorosaur fossils should reveal whether chevrons clump into two shape groups — supporting the idea of a sex split — or come in a range of forms, says Holtz.

Confirmation of the findings could allow researchers to use chevron comparisons to determine sex in other small dinosaurs that might have used feathers for display. But Holtz says that the method would not be widely applicable to multi-tonne dinosaurs such as Tyrannosaurus rex and Triceratops.

If proved, the method would join one other technique to ascertain whether a dinosaur was male or female. In 2005, researchers noted that some T. rex fossils contain bone tissue similar to the medullary bone of modern female birds, for which it provides a short-term reservoir of calcium to produce eggshells3. This method works for other large dinosaurs, but it is not foolproof because the medullary bone is only found in female specimens that are sexually mature and ready to lay eggs.