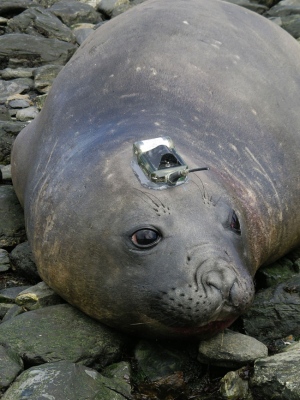 Southern elephant seals fitted with satellite-linked instruments similar to the one above helped oceanographers map deep currents off Antarctica.

By tracking the voyages of elephant seals off Antarctica, and with the help of satellite imaging and undersea sensors, researchers have discovered a long-elusive source for the deep-ocean streams of cold water that help to regulate the Earth's climate.

Antarctic bottom water (AABW) is cold, highly saline water that forms near the shores of Antarctica. Being denser than typical seawater, it sinks to the depths and then moves north in sluggish currents that spread across the globe.

Three sources of AABW were known until now. The first, in the Weddell Sea, was found in 1940; two others were found in the Ross Sea and along the Adélie Coast of East Antarctica in the 1960s and ‘70s. But for years, researchers have suggested that these were not the only ones. In particular, water samples from an area called the Weddell Gyre contain atmospheric pollutants known as chlorofluorocarbons (CFCs), indicating that the deep water came into contact with the air far too recently to have been carried there from one of the known AABW sinks.

Now, Kay Ohshima, a physical oceanographer at Hokkaido University in Sapporo, Japan, and his colleagues have traced that water to a fourth AABW source, in the Cape Darnley polynya. Their results are published today in Nature Geoscience1.

Polynyas are regions of open water near sea ice that are kept from freezing by wind and currents that sweep newly formed ice away. Polynyas have relatively high salinity, because most of the salt in sea water is expelled as it freezes.

Armed with the hypothesis that the missing source might be such a polynya, the researchers used satellite sensors to hunt for polynya regions where ice formed particularly rapidly. When satellite data suggested that Cape Darnley might be a candidate, the researchers moored instruments on the seabed, hoping to spot the descending current. In addition, they relied on data from elephant seals (Mirounga leonina) tagged with instruments that monitor ocean conditions.

“The seals went to an area of the coastline that no ship was ever going to get to, particularly in the middle of winter,” says Guy Williams, a physical oceanographer at the Antarctic Climate and Ecosystems Cooperative Research Centre in Hobart, Australia, and a co-author of the study.

The elephant seals confirmed the researchers' hunch. “Several of the seals foraged on the continental slope as far down as 1,800 metres,” he says, “punching through into a layer of this dense water cascading down to the abyss. They gave us very rare and valuable wintertime measurements of this process.”

The new finding fills a gap in researchers’ understanding of the Southern Ocean’s role in global climate, “including carbon dioxide, temperature, the stability of the Antarctic ice sheet and changes in sea level", says Richard Alley, a geophysicist at Pennsylvania State University in University Park, who was not part of the study.

Still, Williams and Ohshima say that the Cape Darnley polynya represents, at most, about one-eighth of the world’s AABW, and that other, similar sources might remain to be discovered.

Michael Meredith, a polar oceanographer at the British Antarctic Survey in Cambridge, UK, who wrote an accompanying commentary on the study, says that if the total rate of AABW formation declines, the resulting changes in cold-water circulation could have important effects on global climate, letting the ocean depths warm and thereby changing the rate of heat exchange between Antarctica and the tropics. Moreover, he says, sea levels could rise — owing to the fact that water expands as it warms — and temperature changes could affect deep-sea ecosystems.