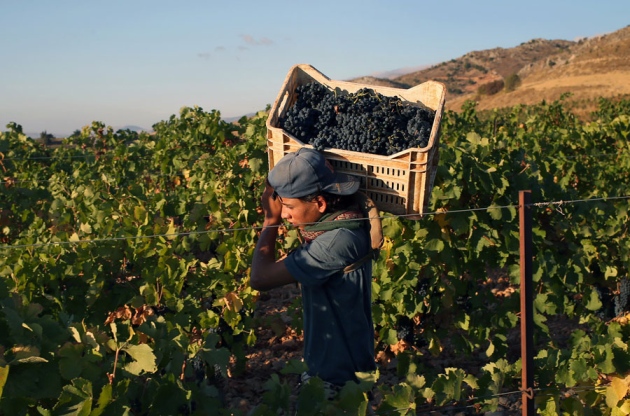 A major seed bank in Aleppo, Syria, holds genes that might help researchers breed crops to survive climate change. But the conflict tearing the country apart has rendered the bank largely inaccessible for the past four years. Now an effort to duplicate its seed collection at more-accessible locations is ramping up.

On 29 September, the International Center for Agricultural Research in the Dry Areas (ICARDA), which runs the bank in Aleppo, officially launched a sister bank in Terbol, Lebanon, which now hosts 30,000 duplicates. Together with a new bank in Rabat, Morocco, it will make thousands of seeds available to researchers.

“The situation in Syria did not allow us to continue our core activities,” says Ahmed Amri, head of genetic resources at ICARDA’s research station in Rabat. “I’m happy that we [ICARDA] have established ourselves back to normal.”

Seed banks function as bank accounts for plant genes. Collectors deposit seeds, which can later be ‘withdrawn’ to replenish crops lost in conflict or disaster, to breed new traits into crops — such as pest or heat resistance — and to research the evolution of plants over the ages.

ICARDA’s collection, previously held entirely at the bank in Aleppo, is especially valuable because it aims to collect seeds from the world’s dry regions. That includes the Fertile Crescent, which spans parts of North Africa, the Middle East, the Caucasus and west Asia, and is thought of as the birthplace of modern agriculture. The collection contains many wild relatives of modern crops such as wheat, barley, lentils and grass pea.

The centre provides researchers and breeders with an average of about 20,000 samples each year, says Amri, with most material going to the United States, to institutions in the nation’s breadbasket such as Kansas State University and North Dakota State University. Many wild varieties from arid regions have traits that may help crops to meet the challenges posed by climate change, including resistance to drought, heat and pests, and adaptations to salinity.

ICARDA’s gene bank harbours wheat seeds that are the product of thousands of years of adaptation and natural selection, says Maricelis Acevedo, associate director for science for the Delivering Genetic Gains in Wheat project at Cornell University in Ithaca, New York. “Only a small amount of wheat genetic diversity has been utilized and explored.”

Although most staff left ICARDA’s Aleppo site in 2012, the vault there is intact, according to the last inspection three months ago. But seeds can no longer be moved in or out easily.

Almost all of the seeds in ICARDA’s bank have previously been duplicated and sent to banks elsewhere, mainly to the super-secure Svalbard Global Seed Vault in Norway — a.k.a. the ‘doomsday vault’ — which was set up to provide back-up copies of seeds held in banks worldwide. But this trove is not easily available to scientists. By contrast, ICARDA’s collection is mainly meant to be ‘active’: in other words, available to farmers, researchers and breeders.

In 2015, ICARDA made its first withdrawal of seeds from the Svalbard bank and is now using them to build up stocks in Terbol and Rabat. It will return the stocks to Svalbard and withdraw several more batches to reconstruct the entire Aleppo collection.

Duplicating the collection in more-accessible gene banks is vital, says Mogens Hovmøller, a plant pathologist at the University of Aarhus in Denmark, who also leads the Global Rust Reference Center. That project was co-founded by ICARDA and is part of an effort to minimize the world’s vulnerability to devastating wheat-rust diseases. 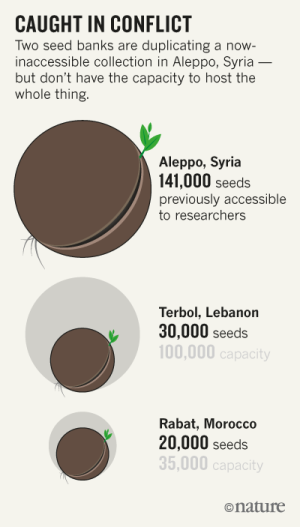 The choice of Terbol as a location is a “brilliant move”, says Michiel van Slagaren, who worked for ICARDA from 1988 to 1994 and is now at the Kew Royal Botanic Gardens site in Wakehurst, UK. Terbol lies in Lebanon’s Bekaa valley, which provides a gradient of conditions from semi-desert to high-rainfall areas and so is ideal for testing how seeds grow in different ecosystems, he says.

But the move may also bring risks. The gene bank looks out on the Anti-Lebanon mountain range that forms much of Lebanon’s border with Syria and is not far from the conflict. The Bekaa valley also hosts refugees fleeing the civil war.

Van Slageren ponders the potential for the conflict to spill into Lebanon. “You do have to wonder how their minds have been put at ease,” he says. He notes that when ICARDA was set up in 1977, its head­quarters were in Lebanon, but moved to Syria because of the Lebanese Civil War.

The latest move has also posed staff challenges. Many long-serving members were already close to retirement when ICARDA left Syria, says Amri, and so did not move to Terbol. And funding remains an issue, although ICARDA received significant financial help with the move from various agencies, including the CGIAR Consortium, a global partnership aimed at alleviating poverty and hunger.

Amri is confident. Among other things, previous unrest in Lebanon did not disrupt ICARDA’s Terbol station. “It’s gone through 20 years of fighting, and we never had any problems,” he says. Still, the Moroccan talks wistfully of his years working in Syria. “We enjoyed our lives in Aleppo. It was one of the nicest places to live — wonderful people and a good environment for research at ICARDA.”