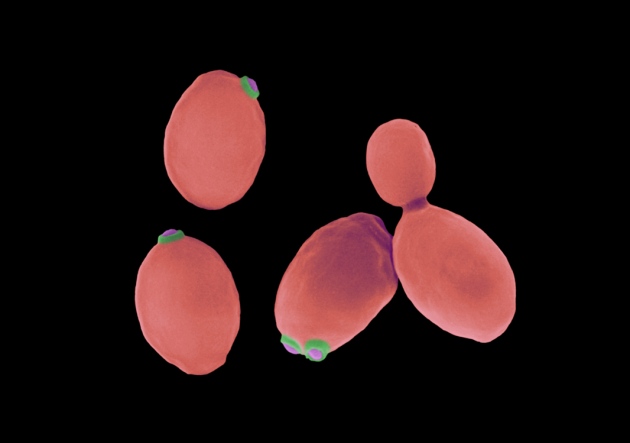 The yeast Saccharomyces cerevisiae is used to make beer and bread.

Evolutionary biologist Stephen Jay Gould once pondered what would happen if the cassette “tape of life” were rewound and played again. Synthetic biologists have tested one aspect of this notion by engineering chromosomes from scratch, sticking them into yeast and seeing whether the modified organisms can still function normally.

They do, according to seven papers published today in Science that describe the creation, testing and refining of five redesigned yeast chromosomes1–7. Together with a sixth previously synthesized chromosome8, they represent more than one-third of the genome of the baker’s yeast Saccharomyces cerevisiae. An international consortium of more than 200 researchers that created the chromosomes expects to complete a fully synthetic yeast genome by the end of the year.

The work the team has already done could help to optimize the creation of microbes to pump out alcohol, drugs, fragrances and fuel. And it serves as a guide for future research on how genomes evolve and function.

“The amazing thing here is that they are figuring out how to tweak the genome — not just synthesize it — through a design-build-test-learn cycle,” says Jack Newman, co-founder of Amyris Biotechnologies in Emeryville, California. The approach is similar to one that computer scientists might take when trying to understand a computer code written a decade ago, he adds, although the task is much harder with genomes that have undergone millions of years of evolution. Yeast originated more than 50 million years ago, when the Saccharomyces lineage branched off from other fungi.

In 2010, geneticist Craig Venter and his team revealed9 the first synthetic genome, a stripped-down version of the genetic code from a bacterial parasite, Mycoplasma mycoides. Four years later, a team led by Jef Boeke, a yeast geneticist at New York University Langone Medical Center in New York City, synthesized8 a chromosome from yeast, a more complex organism that is classified as a eukaryote — a group that also includes plants, worms and people.

Venter’s goal was to realize the smallest genome needed to sustain life, but Boeke sought to explore fundamental questions about evolution, such as whether yeasts could have evolved through alternate routes. He turned the query into a hypothesis testable with synthetic biology: how much can you change a genome and still have a working organism?

To look for an answer, Boeke assigned each of S. cerevisiae’s 16 chromosomes to teams of collaborators, spread across the United States, United Kingdom, China, Singapore and Australia. Each was to create a chromosome that was stable yet evolvable, and would keep yeast functioning as usual.

The teams used computer programs to design the codes of their respective chromosomes. They omitted some sequences found in naturally occurring yeast chromosomes, such as repetitive parts of the genome, in hopes of increasing the stability of the synthetic versions. And they endowed their creations with a mechanism that mimics the random variation that drives evolution. When this scrambling system is triggered, it can shuffle, duplicate and delete genes at random.

A team led by researchers at the Pasteur Institute in Paris documented2 dramatic structural changes in the nucleus of the synthetic yeast — even as it continued to thrive, making proteins and reproducing. “It seems like we can really kind of torture the genome in complicated ways and frequently the yeast shrugs its shoulders and grows like normal,” Boeke says.

Some teams in the consortium invented techniques to rapidly identify errors in synthetic chromosomes3, 4. Another group, led researchers at Tianjin University in China, optimized techniques to remove bugs in the genetic sequences of the chromosomes, in one instance by using the gene-editing tool CRISPR–Cas95.

“Considering that they synthesized 536,024 base pairs in that chromosome and only used CRISPR to mess around with 45 of them is kind of refreshing,” says George Church, a geneticist at Harvard University in Cambridge, Massachusetts. “It makes you feel like maybe this is the next big thing.”

Genome synthesis is unlikely to displace tools such as CRISPR, which allow scientists to add or subtract a limited number of genes in an organism, he says. But it may become the favoured method for applications that require complicated genetic changes. This includes engineering yeast and other microbes to produce fragrances and other materials; manufacturers that rely on such microbes could use synthetic genomes to make those organisms more resilient to harmful viruses, for example.

“If you took those [microbe] strains offline and reprogrammed their code, then put them back in, the viruses would be so far out of touch they couldn’t come back,” Church says. “It would be like going back to the Middle Ages and giving one country hydrogen bombs.”

Several groups have launched efforts to synthesize genomes from species such as the bacterium Escherichia coli — and from people. Boeke is confident that his consortium will create a fully synthetic yeast genome by the year’s end. The team has already created several additional chromosomes, and is debugging and testing them.

The group’s latest results will encourage others to dream big, Church says: “They’ve been able to induce radical changes in the code, so it emboldens you to be even more radical.”