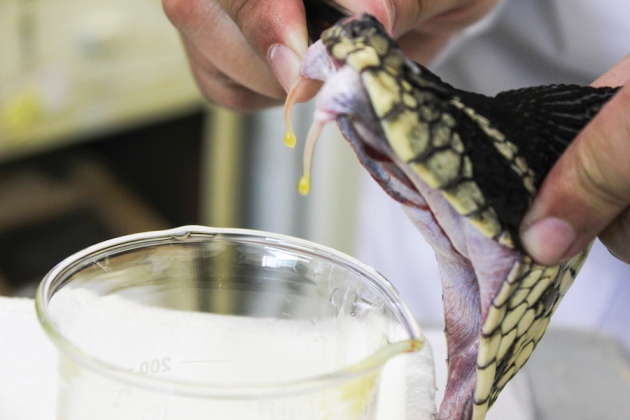 The pit viper, Bothrops jararacussu, is a poisonous snake found in Brazil.

Conventional methods rely on natural coral-snake venom, which is hard to come by: the snakes produce only small amounts with each bite and are hard to raise in captivity. So Ho and others have turned to proteomics and synthetic biology in the hope of improving the quality and availability of antivenom. “We need a new way to meet the demand for antivenom from the Ministry of Health,” he says.

These efforts are now bearing fruit. Last month, Ho and his colleagues reported1 that they had engineered short pieces of DNA that, when injected into mice, triggered antibodies against coral-snake venom. The scientists then boosted the animals’ immune response by injecting them with small pieces of synthetic venom antibodies synthesized in Escherichia coli bacteria.

In a separate study also published last month2, another group of researchers in Brazil used synthetic antibody fragments to neutralize the effects of bites by the pit viper Bothrops jararacussu.

Such progress is encouraging, given the severe medical burden caused by snakebites in the developing world, says Robert Harrison, head of the Alistair Reid Venom Research Unit at the Liverpool School of Tropical Medicine, UK. Each year, around 90,000 people die after being bitten by venomous snakes3.

Yet antivenoms are still made using a method that has not changed for more than a century. Large animals, typically horses, are injected with small amounts of purified proteins extracted from snake venom, which prompts the production of antibodies. Plasma containing these antibodies is then given to snakebite victims.

But this life-saving treatment is limited in important ways. Each antivenom is effective against only a single species or, at most, a small group. And the drugs must be refrigerated, a major problem in tropical countries without reliable electricity. “When you think about it, it’s amazing these antivenoms work at all,” says Leslie Boyer, director of the Venom, Immunochemistry, Pharmacology and Emergency Response Institute at the University of Arizona in Tucson.

The number of pharmaceutical companies that make antivenoms is declining, because the drugs are not very profitable. In 2010, for instance, pharmaceutical giant Sanofi of Paris, ended production of the antivenom Fav-Afrique, which is designed to treat the bites of ten of Africa’s most poisonous snakes.

Ho hopes that his approach will help to fill this void. Rather than relying on venom milked from live coral snakes, he began with small pieces of coral-snake DNA that code for venom toxins. He and his colleagues injected these DNA pieces into mice to prime their immune systems; a month later, they gave the animals a booster shot containing synthetic venom antibodies.

Only 60% of mice injected with a lethal dose of coral-snake venom survived after receiving Ho’s experimental treatment, compared to nearly 100% for existing antivenoms. But Ho is undaunted. “This result shows there are other ways to obtain neutralizing antibodies,” he says. “Maybe to get better results, we need to try again but use more antibodies. We just don’t know yet.”

The second Brazilian team, led by molecular biologist Carla Fernandes of the Fundação Oswaldo Cruz (Fiocruz) biomedical research institute in Porto Velho, tested a different technique, using a phage display library to make synthetic versions of the antibodies that llamas produced when they were injected with B. jararacussu snake venom. Giving these antibodies to snakebite victims would eliminate the need to use animal plasma. It also could reduce muscle damage and tissue death at the site of the bite, compared to traditional antivenoms, because the synthetic antibodies are smaller and better able to penetrate into tissue.

Synthetic biology: How best to build a cell

The path to newer antivenoms isn't straight, but researchers believe that moving quickly is key. “There has been significant, rapid progress in this area, but it needs to be fast. There are too many people dying from what is essentially a preventable disease,” says Harrison.

To Boyer, however, the antivenom shortage is not caused by a lack of science. “It costs 14 bucks to make a vial of antivenom that costs US$14,000 in the US,” she says. “You’re not going to get cheaper than that. The expensive parts aren’t the science — it’s everyone wanting a cut of the profits that drives the price up and puts it out of reach.”