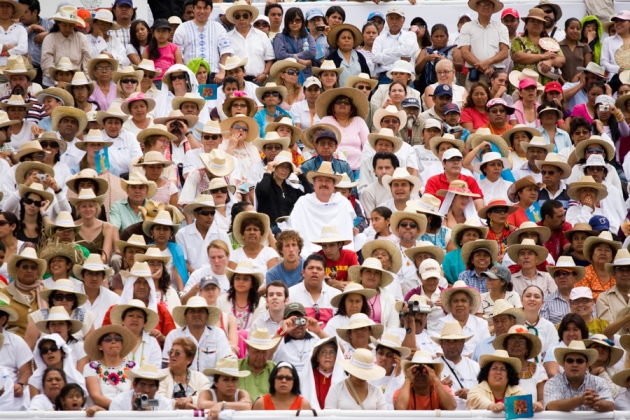 Spectators at the Guelaguetza, a traditional indigenous event in Oaxaca City, Mexico.

The largest survey of Mexican genetics performed so far reveals tremendous diversity in the country. In some cases, the people studied are as genetically distinct from each other as are people from different continents.

“As academics, we have been separating them into two groups — indigenous and cosmopolitan,” says geneticist Andrés Moreno-Estrada at Stanford University in California, one of two lead authors of the paper describing the findings, which is published today in Science1. “Genetically, we see that, in fact, there is very little difference between these two.”

The study examined 1 million genetic variants from across Mexico, obtained from people belonging to 20 indigenous groups as well as 11 mestizo populations. The team found that the indigenous populations are surprisingly diverse. Two groups from the far north and south of the country, for instance — the Seri and Lacandon, respectively — are more genetically different from each other according to one measurement of genetic divergence than are Europeans and Chinese people.

The authors say that the native groups that are most genetically distinct have maintained their unique genetic attributes in part because their modern-day populations trace their ancestry back to relatively small founder groups. These founder groups originally contained less genetic diversity than did other groups whose ancestors came from large civilizations, such as the Maya, and have therefore become more genetically isolated over time (see 'Mexican skeleton gives clue to American ancestry').

The genetic uniqueness of some native groups is “striking”, and only beginning to be understood, says geneticist Alexander Kim of Harvard Medical School in Boston. “This points to some pretty dramatic and long-standing processes of isolation, and suggests that sampling of additional native populations from Mexico, not to mention other countries in the Americas, could reveal an even richer panorama of variation,” Kim says.

The authors also report that the mixed-descent Mexicans in the study, although economically and socially distinct from native populations, are genetically quite similar to them. Mestizo people from particular regions of Mexico showed more genetic similarities to nearby indigenous groups than to distant ones.

“We see that there is very little difference between a cosmopolitan person from the city of Oaxaca and a Zapotec from the highlands of Oaxaca, and I hope this breaks down those barriers,” Moreno-Estrada says. “This separation in social terms that we have been accepting for years doesn’t have a biological basis.”

The underlying contributions of indigenous genes to the overall Mexican gene pool also have medical implications. The researchers found that the degree of western or eastern native ancestry present in a Mexican-American’s genome could change one measurement of his or her baseline lung function by as much as 7.3% — giving a difference equivalent to ageing by 10 or 11 years. That could affect the way that doctors diagnose lung disease, the researchers contend.

According to Stanford geneticist Carlos Bustamante, a senior author of the paper, the overall findings underscore the importance of studying Native American populations in detail. “This speaks to the richness of these populations, and our ability to celebrate both the genetic and anthropologic data that speak to the uniqueness of these groups,” he says.