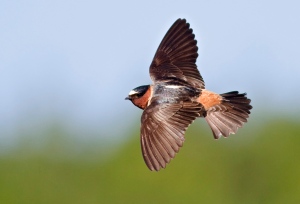 Cliff swallows' wings may be getting shorter to increase agility — and the odds of avoiding cars.

Roadside-nesting cliff swallows have evolved shorter, more manoeuvrable wings, which may have helped them to make hasty retreats from oncoming vehicles, according to a study published in Current Biology1.

The study’s authors discovered the trend after noticing that the number of vehicle-killed birds had declined over the past three decades. They suggest that the two findings provide evidence of roadway-related adaptation.

“I’m not saying that it’s all because of wing length,” says Charles Brown, a biologist at the University of Tulsa in Oklahoma and one of the authors of the study. But, he says, the shortening does support the idea that the birds are adapting to disturbed environments, as other organisms presumably are.

Together with Mary Bomberger Brown, a ornithologist at the University of Nebraska–Lincoln, Brown tracked roadside populations of cliff swallows (Petrochelidon pyrrhonota) in western Nebraska for 30 years, mostly to study the birds social behaviors within their colonies.

These birds winter in South America but breed in North America, in colonies of up to 12,000 adults. They typically build their conical, mud-based nests into the sides of cliffs, but have also taken to living under bridges and highway overpasses.

As the two researchers checked the roadside colonies, Brown, an amateur taxidermist, collected dead swallows for skinning and stuffing — gathering 104 vehicle-killed adults and 134 adults killed accidentally in nets used for the study. When he and Bomberger Brown noticed a decline in the annual number of roadkills — even though the overall population was increasing — they compared the wing measurements of both types of stuffed bird.

Brown says that there is evidence that shorter wings make the animals more agile: “they can make a 90º turn more rapidly”, he says. That would help the birds to dodge traffic as they exit or enter their nesting sites, or take off from the pavement, Brown explains. And that in turn would enable them to survive and produce more short-winged offspring.

The researchers tried to rule out other factors that might have explained the decline in roadkill — including changes in methods to find the animals, traffic patterns, predators, diseases and scavengers — but acknowledge that it might have been caused by behavioural changes, such as the birds learning to avoid cars.

Taxidermist Johannes Erritzoe at the House of Birdresearch in Christiansfeld, Denmark, has also noticed a decline in the number vehicle-killed birds around Denmark, and suspects natural selection. Although he has not yet measured wing length, he says that he now plans to do so.

It is hard to definitely prove that animals are adapting to living around roads, says behavioural ecologist Colleen St. Clair at the University of Alberta in Edmonton, Canada. But, she says “this is the best demonstration that they do have that capacity”.