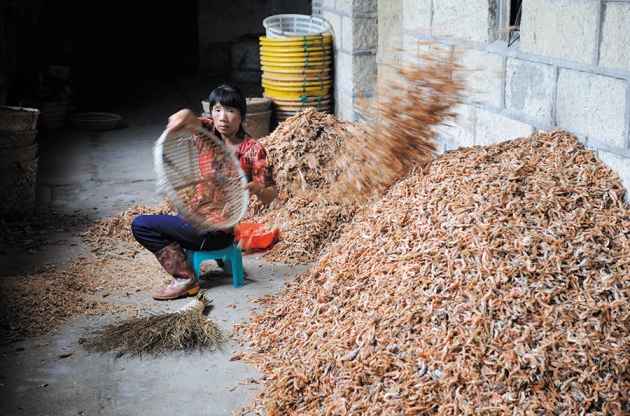 Discarded shrimp shells contain nutrients that could be used to enrich animal feed.

Every year, some 6 million to 8 million tonnes of waste crab, shrimp and lobster shells are produced globally — about 1.5 million tonnes in southeast Asia alone1. Whereas 75% of the weight of a tuna fish can be extracted as fillets, meat accounts for only around 40% of a crab's mass.

In developing countries, waste shells are often just dumped in landfill or the sea. In developed countries, disposal can be costly — up to US$150 per tonne in Australia, for example.

Yet shells harbour useful chemicals —protein, calcium carbonate and chitin, a polymer similar to cellulose, but which contains nitrogen (see 'Shell biorefinery'). The potential value of such shells for the chemical industry is being ignored. Scientists should work out sustainable ways to refine crustacean shells, and governments and industry should invest in using this abundant and cheap renewable resource.

Dried shrimp shells are valued at a mere $100–120 per tonne. They can be ground down and the powder used as an animal-feed supplement, bait or fertilizer, as well as in chitin production. The return is not much more for agricultural residues and wastes: corn stover and wheat straws, which are burned for heat or refined into chemicals, sell for $50–90 per tonne.

Protein is good for animal feeds. For example, Penaeus shrimp shells contain all the essential amino acids and have a nutrient value comparable to that of soya-bean meal. Today, the protein is not being used because the current processing methods destroy it. As livestock breeding rises rapidly, waste crustacean shells from southeast Asia could be transformed into protein-rich animal feed with an annual market value of more than $100 million, according to World Bank data. 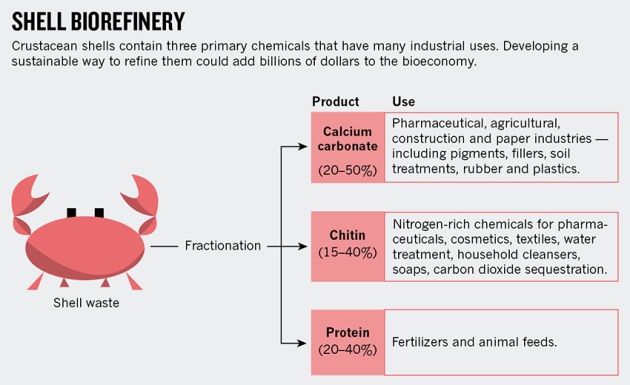 Calcium carbonate has extensive applications in the pharmaceutical, agricultural, construction and paper industries. It currently comes mainly from geological sources such as marble and limestone. These sources are plentiful but might contain heavy metals that are difficult to remove. Chalk from shells would thus be better for human consumption, for example as a constituent of pills. People might also find it easier to accept tablets that originate from food sources than from rocks.

The market price of ground calcium carbonate is around $60–66 per tonne for coarse particles, which are used in construction, pigments, fillers and soil treatments. Ultrafine particles, which can be used to improve the properties of rubber and plastics, can reach an astonishing $14,000 per tonne. Even if the calcium carbonate from southeast Asian crustacean shells was processed into only the cheapest coarse particles, it could have an annual market value of up to $45 million.

Chitin is a linear polymer and the second most abundant natural biopolymer on Earth (after cellulose). It is found in fungi, plankton and the exoskeletons of insects and crustaceans, and organisms generate about 100 billion tonnes of chitin every year2. Currently, the polymer and its water soluble derivative, chitosan, are used in only a few niche areas of industrial chemistry, such as cosmetics, textiles, water treatment and biomedicine. Its potential is much greater.

Unlike most other forms of biomass such as cellulose, chitin contains nitrogen. Nitrogen-containing compounds — widely used in the pharmaceutical industry, carbon dioxide fixation, textiles and beyond — are crucial for modern life. For example, the nitrogen-containing organic compound pyrazine is integral to several best-selling drugs such as eszopiclone (for sleeping difficulties) and varenicline (to treat nicotine addiction). Ethanolamine (ETA) is used in power plants for CO2 sequestration and in skin-friendly soaps, household cleansers and surfactants. Nitrogen-containing chemicals have a huge market — about 2 million tonnes of ETA are used a year globally3, with annual sales of around $3.5 billion.

The industrial production of nitrogen compounds involves fossil fuels and energy-intensive processes. First, nitrogen gas must be converted into ammonia through the Haber process, which is notorious for its low reaction efficiency. This process alone accounts for an estimated 2–3% of global energy consumption. For every mole of nitrogen gas consumed, three moles of hydrogen gas, derived from fossil fuels, are used.

Chitin might be a more suitable starting point for ETA production. With carbon, nitrogen and oxygen already bound in the polymer, only one step is needed to make ETA. Another five chemicals have been derived from chitin in a single step and the list is growing. So far, however, this has been achieved on only a small scale in the lab4.

Extracting chemicals from waste shells with existing methods is destructive, wasteful and expensive. It requires separating out the different components, a process known as fractionation. Protein is removed with sodium hydroxide solution and the decomposition of calcium carbonate uses hydrochloric acid — both are corrosive and hazardous solvents.

To make chitosan, chitin is treated with 40% concentrated sodium hydroxide solution. The production of 1 kilogram of chitosan from shrimp shells requires more than 1 tonne of water.

As a result, good quality chitin can cost up to $200 per kilogram, although the starting material is cheap. The global industrial use of refined chitin (in membranes, drug delivery, food and cosmetics) is low: around 10,000 tonnes per year3. Few chitin facilities exist; China, Japan, Thailand and Indonesia have a few. The transformation of chitin or chitosan to other chemicals poses further problems. Natural chitin is a crystalline material that prevents reagents from easily accessing the polymer chains. Under harsh reaction conditions, the chains easily undergo side reactions to form myriad complex compounds. Separation of the bio-based products from the reactor is often laborious. 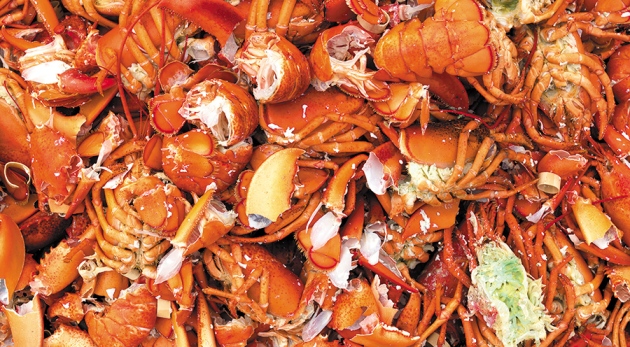 Lobster shells harbour the nitrogen-rich compound chitin, which is used in pharmaceuticals.

In our view, these challenges are no greater than those in processing woody biomass into biofuels and other chemicals, which took two decades to move from the lab to commercial scales.

Establishing a profitable, sustainable industry from shell waste is going to take creative chemistry. It needs a sustainable fractionation method to separate proteins, calcium carbonate and chitin — one that avoids corrosive or hazardous reagents and minimizes waste.

New technologies are emerging. For example, teams in Mexico and the United Kingdom demonstrated a lactic-acid fermentation process for chitin production in the lab and in a pilot plant in the early 2000s5, 6. The process converted up to 30–50 kilograms of shell waste in a single reactor. A mixture of bacteria that consumes proteins and decomposes calcium carbonate has been developed by groups in the United Kingdom, United States and China6, 7, 8. Protein hydrolytes and calcium lactate are by-products that are useful for animal feed and calcium supplements.

Another option would be to design and use ionic liquids (liquid organic compounds with ionic functional groups) that can dissolve carbohydrate polymers and extract chitin. Chitin polymers produced in this way have long chains and a high molecular weight, and can be spun into fibres and films for wound dressings and water treatment, for example.

Researchers also need to explore physical, solvent-free methods for shell fractionation. Ball milling (placing materials with metal balls in a spinning cylinder) may be used to grind the shells finely and break apart crystals. Combining chemical and mechanical forces might prove advantageous. For example, using a ball mill and an acid catalyst can degrade wood without heating. Combining steam explosion (a technique that uses superheated steam and sudden pressure release) with acid is another way to liberate the shell's components.

Ball milling and steam explosion have been used for woody biomass refining at a pilot scale but few people have noticed the potential of these techniques for waste shells. (In collaboration with the Chinese Academy of Sciences' Institute of Process Engineering in Beijing, our group at the National University of Singapore aims to have a pilot demonstration for shells running in a few years.)

“In the next five years, a multimillion-dollar project should be launched to establish the first processing pipeline.”

Converting chitin into small nitrogen-containing chemicals — such as derivatives of ETA and of the widely used organic solvent furan9 — is developing fast, although is still in early stages. It may take at least five years to scale up the process and another ten years to commercialize it. Future investigations need to explore routes from chitin to other chemicals, enhance product yields through improved catalysis and pre-treatments and ease the separation of products.

We propose that a processing pipeline be developed for refining waste shells, just as woody biomass (composed mainly of cellulose, hemicellulose and lignin) is separated and converted into a range of products in one facility10. That development took the cooperation of many parties, propelled by public concern over energy security and climate change. It also required financial support from governments and the chemical and fuel industry. Shell-waste biorefineries will create new industrial opportunities in southeast Asia and beyond.

Strong support from policymakers, research institutes, governments, funders and the public is key. Fundamental research from scientists worldwide is urgently needed to overcome the technical barriers.

In the next five years, a multimillion-dollar project should be launched to establish the first processing pipeline using new technology. The project should be supported by governments of nations rich in shell waste, and executed by researchers with complementary expertise, covering catalysis, materials science and engineering, food science and life-cycle assessment. Companies — including producers and traders of shellfish, those associated with biocommodities and biomaterials and others promoting renewable materials — should reassess the potential markets of an environmentally friendly and profitable waste-shell refinery and engage with research to commercialize emerging technologies.

In the next decade, stringent regulations should be implemented on the disposal of waste shells, while providing incentives for companies who use them.