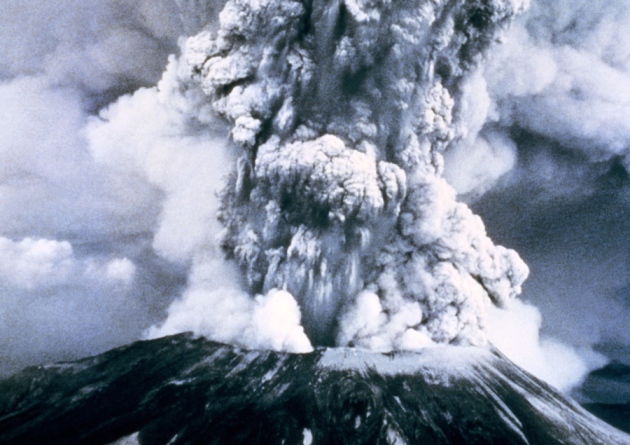 The 1980 eruption of Mount St Helens removed a 300-metre portion of the mountain’s summit.

In one of the biggest-ever seismology deployments at an active volcano, researchers are peppering Mount St Helens in Washington state with equipment to study the intricate system of chambers and pipes that fed the most devastating eruption in US history. This month, they will even set off explosions to generate their own seismic waves. The work could inform research into how volcanoes work throughout the Pacific Northwest and in similar geological settings around the world.

Researchers have already explored magma structures beneath volcanoes such as Italy’s Etna and Vesuvius, and an ongoing multidisciplinary project in the Andes targets two volcanoes in Bolivia and Chile where the ground has been rising for about two decades. But the Mount St Helens study is unique because it aims to produce a three-dimensional picture all the way through and beneath the volcano. If all goes well, it may probe as much as 80 kilo­metres underground — deep enough for scientists to visualize the mountain’s geological origins.

The volcano is part of the Cascade mountain range, which, like other volcanic ranges such as the Andes, rises where a plate of oceanic crust dives deep beneath the lighter-weight continental crust. The diving slab releases water that percolates upwards, lowering the melting point of the rock and allowing magma to form and fuel volcanoes above. Geophysicists would like to understand the entire process better.

“Volcanoes are difficult things to image,” says Alan Levander, a geophysicist at Rice University in Houston, Texas, who leads one portion of the project. “If we can get a top-to-bottom image of a connected active magma system, that would go a long way toward understanding.”

Mount St Helens erupted in May 1980, killing 57 people and blanketing much of the western United States in ash. The blast obliterated the top 300 metres of the mountain and sent an avalanche of 2.5 cubic kilometres of debris — the biggest ever recorded — racing down the valley below. Since then, geologists have poked and prodded the mountain with all manner of research instruments, trying to understand what made it go off when it did.

But surprisingly, they have never quite found out how the underground plumbing that feeds magma to the surface works. “It’s clearly not in some big spherical chamber, because we would have seen that through previous experiments,” says project leader Kenneth Creager, a seismologist at the University of Washington in Seattle. So far, the best picture of what is happening beneath St Helens reaches only 5–8 kilometres down, as reported in a 2009 seismic study (G. P. Waite and S. C. Moran J. Volc. Geotherm. Res. 182, 113–122; 2009).

“We’d really like the tools to look deeper, and recently we’ve developed those,” says University of Washington seismologist John Vidale. The core of the current project, called iMUSH, or Imaging Magma Under St. Helens, combines two seismic techniques: one explores near the surface and one probes deeper. 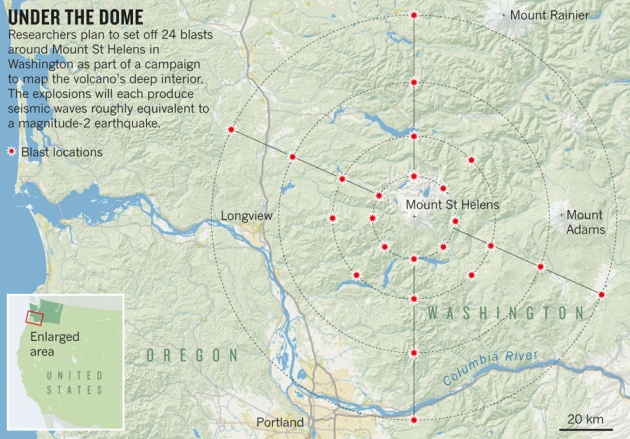 The shallower study will be setting off the blasts around the mountain. Led by Levander, this ‘active-source’ seismic project will use the blasts to create seismic waves, which it will record as they travel through the mountain. Changes in the speed of the waves will reveal discontinuities in the mountain’s structure, such as chambers of molten magma lurking in the solid rock. The team hopes that the experiment will map down to the boundary between Earth’s crust and the underlying mantle, about 40 kilometres deep.

To get the job done, starting next week roughly 65 people will fan out across the mountain to deploy 3,500 small seismometers along roads and back-country trails. They will drill 24 holes some 25 metres deep, drop in industrial explosives used for quarrying, and refill the holes (see ‘Under the dome’). The plan is to detonate the explosives in separate shots over four nights. Each blast will shake the ground as much as a magnitude-2 earthquake.

Results from the active blasts will be combined with the passive seismic part of the experiment, which is already under way: 70 larger seis­mometers around the mountain are measuring how long waves from natural earthquakes take to travel through the ground. Their data can be used to probe as far as 80 kilo­metres down, says Vidale. On 29 June, the experiment captured an earthquake about 24 kilometres beneath the mountain. Quakes deeper than 20 kilometres happen only about once a year, and iMUSH scientists expect this one to provide valuable data on the volcano’s underground workings.

A third iMUSH component collects data on magnetic and electrical properties inside Earth, revealing which portions of the volcano’s interior are molten or wet. The work may help to clarify whether Mount St Helens shares a magma chamber with nearby Mount Adams, a controversial proposal that was put forward in 2009 and has yet to be resolved (G. J. Hill et al. Nature Geosci. 2, 785–789; 2009).

Combining all the data may also reveal how much the volcano’s magma chamber has refilled since its most recent bout of activity in 2004–08, a potential indicator of when it could erupt again. “This will be a huge contribution for our field,” says Olivier Bachmann, a volcanologist at the Swiss Federal Institute of Technology in Zurich. “It’s a fantastic chance that we have here.”