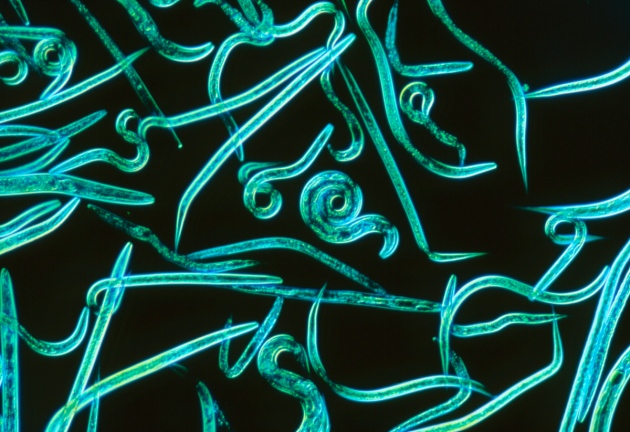 Nematode worms (Caenorhabditis elegans) have been studied in depth by neuroscientists.

Scientists have discovered two extra neurons in a worm species that — they thought — already had its entire nervous system mapped.

“It is a bit of a shock,” says Richard Poole, a developmental biologist at University College London (UCL), and one of the team that found the neurons by accident. The researchers call them mystery cells of the male, or MCMs, because they are found only in male nematode worms.

The neurons help the worms learn when to prioritize mating over eating, revealing how a seemingly simple brain can be capable of a complex learned behaviour — and one that differs between the sexes.

Caenorhabditis elegans worms are the model animal of choice for many neuroscientists, because their neural circuits are so simple that they can be mapped in full. They have two sexes: hermaphrodite and male. Hermaphrodites, the best studied, have just 302 neurons, but males have more — the MCMs raise their total to 385 neurons1.

The two ‘mystery’ cells were discovered when Poole’s colleague at UCL, Arantza Barrios, was looking at the distribution of a peptide often found in neurons, called pdf-1. She saw cells light up where she thought they should not — near the worm’s nose. The neurons develop when male worms reach maturity, the researchers worked out. Their report is published in Nature1.

To find out what the mystery neurons do, the team first conditioned the worms to dislike salt (by associating salt with starvation), and then added mates to a salted arena. For adult male worms, the presence of mates usually overrides their learned aversion to salt. But when males had their MCMs removed during development, they no longer chose to endure the salty arena for the sake of mates. This suggests that the mystery neurons influence whether the worms choose mating or eating.

The MCMs also sit next to a bunch of neurons that are very densely connected — usually a sign that the cells control crucial behaviours, says Bill Schafer, who studies C. elegans circuits at the University of Cambridge, UK. “They seem to have an important position in the circuitry.”

When the team examined the cells’ origin more closely, they discovered that the neurons develop from non-neuronal cells called glia that are already fully formed. This is the first example of a glial cell turning into a neuron in invertebrates, although a similar process has been seen in vertebrates before: for example, in rats, glia are known to turn into neurons during brain development2.

There are a couple of explanations for why these two cells were missed in one of the best-understood animal models in science. Hermaphrodite C. elegans are much better studied than the male of the species, Bill Schafer points out. “A lot of the male circuits are really not that well understood,” he says. When they have studied the male, scientists have focused on areas of more obvious divergence, such as the tail. Perhaps, says Poole, “they didn’t pay quite enough attention to the brain”.

Next, the team plans to study how the MCMs contribute to circuits governing learning, and how they feed into sex differences in the brain. “In terms of being able to get a detailed understanding, it’s much easier when you’ve got hundreds of cells rather than hundreds of billions of cells,” says Schafer.

The original version of this story stated incorrectly that the two new neurons were the first examples of one cell type turning into an entirely different one, in invertebrates.